A Bartonella sp. was isolated from sheep blood. Bacterial identification was conducted by using electron microscopy and DNA sequencing of the 16S rRNA, citrate synthase, riboflavin synthase, and RNAase P genes. To our knowledge, this is the first report of ovine Bartonella infection.

Bartonella spp. are potential zoonotic pathogens that frequently cause bacteremia without overt disease in reservoir hosts (1). Several new Bartonella spp. were found in wild and domestic ruminants from Europe and North America (2–4), but previous blood cultures performed on 150 domestic sheep and 84 bighorn sheep failed to isolate Bartonella spp. (2,5). 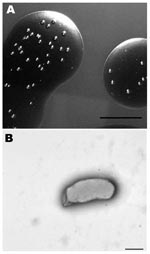 We isolated a Bartonella sp. from 2 successive lots of commercial defibrinated sheep blood received from mid- February to mid-March 2007, from a US supplier. Bottles (10 from lot 1 and 6 from lot 2), each containing 100 mL, were newly opened on the day of receipt. Approximately 0.2 mL was aseptically removed and spotted onto the surface of a Columbia agar (BBL; Becton Dickinson, Sparks, MD, USA) plate containing 5% defibrinated sheep blood. The remaining blood was stored at 4°C. Plates were incubated at 35°C in an atmosphere of 7% CO2 and examined daily for bacterial growth. Blood appeared sterile after 7 days; however, by 14–21 days, pinpoint bacterial colonies were recognized in the blood film. After 3–4 weeks, mature colonies (Figure 1, panel A) were rough, off-white, difficult to disperse but nonadherent to the agar surface, and ≈1 mm in diameter. Monomorphic colonies grew in all samples within each lot. Estimated concentrations in the starting pools of blood from lots 1 and 2 were 750 CFU/mL and 25 CFU/mL, respectively.

The cells were small, gram-negative rods, 0.47–0.60 μm in diameter, and 0.8–1.9 μm in length (Figure 1, panel B). Flagella were not observed. Growth was not detected after transfer of colonies to Columbia blood agar and several other available diagnostic media that contained blood products (e.g., chocolate agar, Centers for Disease Control and Prevention anaerobe agar, Bordet-Gengou agar, Mycoplasma agar, and hemin-supplemented thioglycolate medium). Colony transfer to Columbia blood agar plates that were first overlaid with sheep blood (from a presumed uninfected lot) resulted in only 2 or 3 colonies. Repeat cultures from lot 1 showed a 97% reduction in colony numbers after 37 days of storage and no growth in samples after 72 days of storage.

The source of Bartonella sp. was likely intrinsic contamination from bacteremia in donor sheep. Blood was obtained from multiple live sheep with sterile, closed blood collection systems and from venipuncture sites that were prepared by shearing and treatment with antiseptics. Each 5-L lot (1 L/sheep) was pooled and prepared for sale in a separate, clean, well-equipped laboratory facility. Histories of sheep were not determined. Young age (9) and contact with wildlife (2) or cross-species vectors (5) may increase the risk for Bartonella infection in sheep.

Arthropod vectors often transmit Bartonella infections. Melophagus ovinus, commonly called a sheep ked, is a hemophagous ectoparasite of sheep (5). The organism from which DNA sequence of a 16S rRNA gene was isolated was an uncultured bacterial endosymbiont of sheep keds initially called W. melophagi. However, taxonomists now agree that the organism from which the original sequence came should be removed from the genus Wolbachia and placed in the genus Bartonella (5). On the basis of DNA sequence data, candidate status was proposed for the new species B. melophagi (M. Vayssier-Taussat, L. Halos, H.-J. Bouluis, unpub. data, available from www.ncbi.nlm.gov/taxonomy/browser/wwwtaxcgi?id = 291176). An organism with DNA sequence matching that of B. melophagi was recently isolated from a sheep ked (M.Y. Kosoy, K.W. Sheff, A.I. Irkhin, unpub. data, available from www.ncbi.nlm.gov/taxonomy/browser/wwwtax.cgi?id = 291176).

Sheep blood is often used in the laboratory with the expectation that it is free of bacteria. However, routine animal health surveillance and quality control procedures may fail to detect Bartonella spp. Optimal growth conditions for this organism are unknown. In this study, growth was only observed in fresh sheep blood. We were unable to obtain sufficient growth after in vitro passage for further phenotypic characterization. A novel liquid culture medium that supported growth of Bartonella spp. also used fresh, defibrinated sheep blood as a growth supplement (10). High-level Bartonella bacteremia may be transient, and the sensitivity of PCR for detection in pooled blood or individual sheep has not been established. PCR assays performed on lots 1 and 2 after 1 month of storage did not detect Bartonella spp. PCR was not performed at the time of blood collection. Risks associated with Bartonella infection in sheep are unknown. Precautions to reduce potential transmission of Bartonella are advised when handling sheep blood.

Dr Bemis is an associate professor at the University of Tennessee College of Veterinary Medicine. His research interests include diagnostic veterinary bacteriology and mycology.

Dr Kania is an associate professor at the University of Tennessee College of Veterinary Medicine. His research interests include diagnostic veterinary immunology and molecular diagnostics.