We describe a fatal pediatric case of Rocky Mountain spotted fever in Panama, the first, to our knowledge, since the 1950s. Diagnosis was established by immunohistochemistry, PCR, and isolation of Rickettsia rickettsii from postmortem tissues. Molecular typing demonstrated strong relatedness of the isolate to strains of R. rickettsii from Central and South America.

RMSF is endemic in much of the Western Hemisphere, including Central and South America. In Panama, 5 cases of RMSF, 2 fatal, were reported in the 1950s from the vicinity of Ollas Arriba, Trans-Istmus Highway, and Panama City (1–4).

In 1952, R. rickettsii was isolated from 2 of the patients who died and from a pool of Amblyomma cajennense ticks from the Ollas Arriba area, findings that suggest that this tick is a vector of RMSF in Panama (2). In 1961, R. rickettsii was isolated from a pool of 20 immature Amblyomma ticks collected from an opossum and a lizard from the Canal Zone (5). Serosurveillance of 1,400 samples tested by complement fixation with R. rickettsii antigen in 1951–1952 detected 5.4%–15.2% seropositivity in 9 provinces of Panama (6). We describe here a recent fatal pediatric case of RMSF, the first report, to our knowledge, of this disease in Panama since the 1950s. 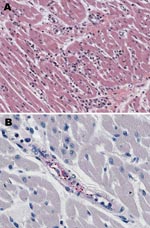 Immunohistochemical evaluation of formalin-fixed, paraffin-embedded tissues that used an immunoalkaline phosphatase technique demonstrated spotted fever group rickettsial antigens associated with rickettsia-like cells in vascular endothelium of multiple tissues, including heart (Figure 1), lung, adrenal gland, and kidney. Serum collected on the day of death had immunoglobulin (Ig) G and IgM microimmunofluoresence antibody titers of 2,048 to R. rickettsii antigen. DNA samples prepared from frozen brain, liver, lymph node, and spleen autopsy specimens were tested by PCR as described previously (7). When amplified, a 208-bp fragment of the conserved 17-kDa Rickettsia antigen gene showed spotted fever rickettsial DNA was present in all autopsy tissues. An OmpA gene fragment (70–602 nt) was amplified from brain and lymph node tissues (GenBank accession nos. DQ002503 and DQ002504). DNA sequencing of the ompA amplicons demonstrated that their nucleotide sequences were identical to each other and had 100% sequence similarity to the homologous ompA fragment of R. rickettsii strain Sheila Smith, isolated from a patient in Montana. An isolate of R. rickettsii (designated Panama 2004) was obtained from brain tissue in Vero E6 cells; its OmpA gene fragment (DQ164838) had 100% nucleotide sequence similarity to the reference sequence of R. rickettsii type strain Sheila Smith. R. rickettsii from Panama is similar to the other R. rickettsii strains circulating in Central and South America but differs from strain Sheila Smith in at least 1 locus containing tandemly repeated sequences (Figure 2).

The clinical characteristics of this patient, e.g., fever, headache, myalgia, petechial rash, and neurologic signs, initially aroused clinical suspicion for a viral fever caused by Venezuelan equine encephalitis (VEE) virus, particularly because there was a VEE outbreak in this area at that time. The failure to diagnose a spotted fever rickettsiosis was partially the result of diminished awareness of RMSF among local physicians and absence of adequate specific diagnostic tests in Panama. Detection of hyponatremia, hypoalbuminemia, and thrombocytopenia, all observed in this patient, indicates endothelial vascular damage and increased vascular permeability and can aid in making a presumptive diagnosis (8). Death secondary to RMSF is associated with delays in diagnosis and delays in initiating appropriate antimimicrobial therapy within the first 5 days of the clinical disease (9). To prevent fatal outcomes, treatment of suspected case-patients should be initiated before the results of diagnostic tests are received, and treatment should be administered for 7–10 days or until the patient has been without fever for at least 3 days (9).

R. rickettsii had been isolated previously in Panama from a few patients during the 1950s and from pools of A. cajennense ticks during the 1950s and 1960s (1,2,5). As occurred in this instance, cases of RMSF have likely been missed in Panama during the intervening decades; however, the low frequency of recognized cases of RMSF does not correspond to the relatively high seroprevalence of complement-fixing antibodies to spotted fever group rickettsiae in residents of Panama (6). Indeed, inoculation of other pools from Amblyomma larvae and A. cajennense adults caused seroconversion to spotted fever group antigens in guinea pigs, but R. rickettsii was not isolated (5). Recent studies of Amblyomma ticks in Brazil have detected both R. bellii and an agent associated with A. americanum in the United States known as “Rickettsia amblyommii” (10). R. amblyommii has been implicated as a cause of a mild, self-limiting rickettsial illness in which seroconversion to R. rickettsii antigens occurs (11,12). R. parkeri, found in A. maculatum and A. triste, has been also identified as a cause of disease in the United States and has been presumptively associated with infections of humans in Uruguay (13). Since the characterization of rickettsial agents associated with Amblyomma species that bite humans is a newly emergent field in the Americas (13–15), other typhus group and spotted fever group agents may be found in Panama.

This case confirms that R. rickettsii is still present in Panama. A high index of suspicion is necessary for an early diagnosis and empiric treatment of RMSF. Proposed widening of the Panama Canal and current construction of a new portion of the Trans-Istmus Highway disrupts the adjacent forest areas and would likely increase the frequency of human–tick contacts. Thus, RMSF and ehrlichioses should be considered early in the differential diagnosis of febrile infections in tick-exposed persons in Panama. Further study of endemic rickettsioses, rickettsial agents, and possible tick vectors in Panama is warranted.