During May–June 2003, an outbreak of monkeypox virus (MPXV) infections, initially detected in Wisconsin, occurred in the midwestern United States (1,2). These MPXV infections were the first to be reported outside of Africa and involved a West African viral strain (1,3). African rodents imported from Ghana were implicated in virus introduction in the United States (2,4–7). The African rodents had been transported and housed with native prairie dogs that were subsequently distributed as household pets in Wisconsin (1). Veterinary and pet store staff are at risk for potentially serious occupationally related infections (8–18). Early links between MPXV infections and prairie dog exposures in veterinary facilities and pet stores (1) led us to investigate occupationally related exposures.

We conducted an outbreak investigation and a veterinary staff cohort study to quantify and characterize all cases that occurred during the 2003 Wisconsin MPXV outbreak, identify protective and risk factors for occupationally transmitted infections, and determine veterinary work practices amenable to infection-control guidelines. Because both investigations were urgent outbreak control measures, no institutional review board approval or written consent was required or obtained.

The Wisconsin outbreak case definition (Appendix) was similar to case definitions established by the Centers for Disease Control and Prevention (CDC) for human MPXV infection (19). Cases were classified as confirmed, probable, or suspected according to clinical, epidemiologic, and laboratory criteria. Case finding was done through electronic postings (email and website postings), faxes, and mass media. Active surveillance of persons in contact with infected persons or animals included self-recorded diaries of signs and symptoms for 21 days postexposure or daily telephone assessments by local health department personnel. Data were summarized at the Wisconsin Division of Public Health (WDPH).

Willing pet store employees were given a standardized questionnaire to assess prairie dog contact and were offered serologic testing. Affected animal distributors were interviewed about work roles and animal care.

The eligible cohort was defined as all persons, regardless of work roles, employed at any Wisconsin veterinary facility where at least 1 outbreak-associated prairie dog was treated during May 13–27, 2003. Cohort members were defined as those facility employees who participated in the study. Cohort case-patients were defined as cohort members who had laboratory-confirmed MPXV infections, regardless of the presence or absence of specific signs or symptoms. Tissue confirmation required demonstration of MPXV by viral culture, PCR, immunohistochemistry, or electron microscopy. Although cases could not be serologically confirmed by outbreak case definition criteria, cohort members with MPXV infections confirmed by tissue or serologic testing were defined as cohort case-patients. Serologic confirmation required the finding of elevated orthopox immunoglobulin M (IgM) titers in a specimen obtained within 56 days after rash onset or seroconversion in paired acute- and convalescent-phase specimens. The cohort study had no probable or suspected-case definitions and, hence, no probable or suspected cases.

Signs and symptoms surveyed were rash, fever, chills, sweats, headache, joint pain, or lymphadenopathy within 21 days of most recent exposure to an ill prairie dog. Cohort members with a history of vaccinia vaccination or unknown vaccination status and birth date before 1972 were defined as vaccinia-vaccinated.

Outbreak-associated prairie dogs treated in Wisconsin veterinary facilities were traced backward and forward. Information was obtained about their illnesses and treatments.

Figure 1. Reported dates of illness onset for persons with monkeypox virus infection. Data from the outbreak investigation and the veterinary facility cohort study, by exposure classification and case status, Wisconsin, 2003. One... 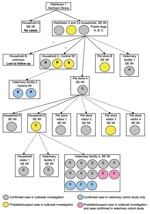 Figure 2. Cases of human monkeypox virus infection. Data from the outbreak investigation and veterinary facility cohort study, by exposure setting and case status, Wisconsin, 2003. A, exposure to prairie dog A; B,...

Fever, sweats, chills, rash, lymphadenopathy, and headache were each associated (p<0.001) with confirmed MPXV infection (Table 2). Among cohort case-patients, 15 (88%) had multiple signs and symptoms and 2 (12%) had only 1 sign or symptom (headache and a nonvesicular, nonpustular rash of unknown onset date, respectively). Severe keratitis required corneal transplantation for 1 cohort case-patient, and a miscarriage occurred at 12 weeks of gestation. Two cohort case-patients did not experience a rash.

Using antihistamines during the prairie dog visit (p = 0.04) was associated with being a cohort case-patient (Table 2). Antihistamine use was considered a possible surrogate for hand-to-face contact because users of antihistamines generally have allergies or rhinorrhea and likely touch their eyes or nose frequently. No other personal medical history was associated with illness. Previous vaccinia vaccination (p = 0.95) was not protective against MPXV infection. Few cohort members reported immunosuppressive medication use (n = 3), immunosuppressive illness (n = 2), or being pregnant (n = 2).

No general work practice was a protective or risk factor for being a cohort case-patient. General work practices were not outbreak specific and were used to assess overall risk for communicable disease transmission. Several cohort members reported hand-to-mouth activities (eating, drinking, chewing gum, or applying lip products) in animal care areas (Table 3). Only 12% who cleaned ill animals’ cages reported having used gloves during this task. Most (92%–93%) cohort members reported cleaning their hands before eating at work and after ill animal contact.

An Illinois animal distributor (distributor 1) obtained prairie dogs from a Texas distributor (C. Austin, pers. comm.). During April–May, 2003, distributor 1 housed ≈200 prairie dogs with African rodents that had been purchased on April 21 and subsequently implicated in MPXV introduction (2,6,7). Distributor 2 purchased 39 prairie dogs, including prairie dogs A, B, and C, from distributor 1 and transported them to Wisconsin during April 15–May 17 (1,4). Prairie dog A remained in the custody of distributor 2 until it was taken to facility 1 (Figure 2) for 10 minutes for carbon dioxide chamber euthanasia on May 13, 2003. Prairie dog B was sold at a swap meet on May 11; became ill with conjunctivitis, lymphadenopathy, and papular skin lesions on May 13; was examined at facility 2 for 10–30 minutes on May 15; and died on May 20. Prairie dog C was sold to pet store A on May 5 and sold to a customer on May 17. On May 19, prairie dog C had illness onset with conjunctivitis, skin lesions, and respiratory disease. Prairie dog C was examined in facility 3 for 20–25 minutes on May 22 and hospitalized at facility 4 from May 25 until its death on May 27. Facility 4 staff provided extensive treatment including repeated examinations; hand feeding; eye discharge removal; and oral, subcutaneous and nebulized treatments. Sixteen (59%) outbreak cases and 14 (82%) veterinary cohort cases were associated with prairie dog C.

The 2003 outbreak of MPXV infections affected Wisconsin residents who had been exposed in multiple settings; however, 59% of cases occurred among occupationally exposed persons. Our cohort study demonstrates that veterinary staff were particularly at risk (23% attack rate). Pet store employees were at lower risk (7% attack rate). Infected prairie dogs were probably more ill and shedding more virus while in veterinary facilities than in pet stores, which would account for more observed infections among veterinary staff. Both Wisconsin distributors of ill prairie dogs became ill. The preponderance of occupationally acquired cases was unique to Wisconsin during this outbreak. Among other involved states, 1 veterinarian from Indiana had a suspected case, and cases occurred in 2 employees of distributor 1 (7,21,22).

Most outbreak cases (59%) and veterinary cohort cases (82%) were associated with exposure to prairie dog C. We found no intrinsic differences in the monkeypox infection of prairie dog C compared with that of prairie dogs A or B and no explanation for this association, although length and type of exposures in facility 4 were likely accountable. Facility 4 had many more employees than the other facilities, and prairie dog C was hospitalized there for a relatively prolonged period (3 days) and received extensive treatments there. In addition, the fact that 7 (54%) facility 4 cohort case-patients reported never having handled prairie dog C indicates that other transmission modes (e.g., fomites, aerosols) could have contributed to that facility’s large number of cases. Nebulization treatments, which prairie dog C received ≈4× at facility 4, could have exposed employees to MPXV. Although nebulization was performed in an enclosed plastic chamber, the nature of the treatment would foster aerosolization, coughing, and possibly mobilization of respiratory secretions with which employees could have unknowingly come into contact.

Although our Wisconsin investigation showed no definitive evidence of human-to-human transmission of MPXV, which concurs with other states’ findings during this multistate outbreak (6,7,21,23), such transmission remains a possibility. Because persons who had had no direct contact with ill animals became ill with MPXV infection, person-to-person transmission within veterinary facilities might have occurred. However, because of the lack of personal protective equipment use among the cohort members and the finding of MPXV in ill prairie dog’s urine and feces (21), environmental exposure may well account for these cases.

The substantial amount of illness among veterinary staff underscores the importance of infection-control practices in veterinary settings. Cohort case-patients frequently did not use personal protective equipment during high-risk activities (e.g., examining or feeding ill prairie dogs). Furthermore, cohort members reported general work practices that foster hand-to-mouth activities in animal care areas. Few (12%) cohort members reported having used gloves when cleaning ill animals’ cages, a task that can contaminate staff hands with animal dander, urine, and fecal matter. We cannot determine whether infection-control guidelines would have prevented MPXV infections among veterinary staff, but use of personal protective equipment might have limited viral transmission. The National Association of State Public Health Veterinarians recently released the Veterinary Standard Precautions Compendium (24), the first guidelines to describe standard infection-control practices for veterinary facilities. Use of these guidelines should be encouraged.

In contrast with results from a previously published study (25), results of our cohort study do not support the conclusion that prior vaccinia vaccination protected against MPXV infection in this outbreak. Hammarlund et al. found that 3 (37%) of 8 vaccinia-vaccinated persons in this outbreak had asymptomatic MPXV infections and surmised that they had long-term immunity against MPXV infection (25). Our cohort study showed that previous vaccinia vaccination did not protect against MPXV infection; all previously vaccinated serosurvey participants with positive serologic results had at least 1 sign or symptom of MPXV infection. The more systematic inclusion and analysis of exposed persons within our cohort, compared with the cohort-series approach of Hammarlund et al., may account for the difference in this finding (26).

Our study has several potential limitations. Although 91% of employees at the 4 affected veterinary facilities participated in the cohort study, only 54% participated in the serosurvey. Persons with tissue-confirmed illness were more likely than persons without such illness to have participated in the serosurvey. These factors might have resulted in an underestimation of overall cases and limited the detection of asymptomatic seroconversion. Recall bias, which might have overestimated the association between prairie dog contact and illness, was likely limited by relatively brief intervals between exposures and data collection. Finally, statistical analysis beyond univariate analysis was limited because of the small number of cohort members involved in each of the high-risk prairie dog exposures.

Our investigation and cohort study demonstrate that occupational exposure, especially among veterinary staff, was a critical factor during this outbreak. This outbreak highlights the importance of standard infection-control guidelines developed for veterinary settings and the need to encourage their use.

Dr Croft is a physician and medical epidemiologist at the University of Wisconsin School of Medicine and Public Health, Section of Allergy, Pulmonary and Critical Care Medicine. Her research interests focus on lung cancer prevention and detection, communicable disease epidemiology, and healthcare disparities.

We are indebted to clinicians, laboratorians, and public health personnel too numerous to name for their contributions during the MPXV outbreak response and investigation in Wisconsin.