Phylogenetic analyses, based on partial medium- and large-segment sequences, support an ancient evolutionary origin of a genetically distinct hantavirus detected by reverse transcription–PCR in tissues of northern short-tailed shrews (Blarina brevicauda) captured in Minnesota in August 1998. To our knowledge, this is the first evidence of hantaviruses harbored by shrews in the Americas.

Rodents and their ectoparasites serve as reservoirs and vectors of myriad viruses and other pathogenic microbes. In contrast, the role of insectivores (or soricomorphs) in the transmission and ecology of zoonoses is largely unknown. Because some soricomorphs share habitats with rodents, shrews might also be involved in the maintenance of the enzootic cycle and contribute to the evolutionary history and genetic diversity of hantaviruses.

Hantavirus antigens have been detected in the Eurasian common shrew (Sorex araneus), alpine shrew (Sorex alpinus), Eurasian water shrew (Neomys fodiens), and common mole (Talpa europea) in Russia and the former Yugoslavia (1–3). More than 20 years ago, when Prospect Hill virus was discovered in meadow voles (Microtus pennsylvanicus) captured in Frederick, Maryland, USA, serologic evidence suggestive of hantavirus infection was found in the northern short-tailed shrew (Blarina brevicauda) (4). However, virus isolation attempts were unsuccessful, and molecular tools such as PCR were unavailable. Empowered by robust gene-amplification techniques and the complete genome of Thottapalayam virus (TPMV) isolated from the Asian house shrew (Suncus murinus) (5,6), we have identified a genetically distinct hantavirus in the northern short-tailed shrew.

Of the 30 northern short-tailed shrews tested, hantavirus M-segment sequences were amplified from lung tissues of 3 of 12 animals captured in Camp Ripley (46.185°N, 94.4337°W), a 53,000-acre, state-owned military and civilian training center near Little Falls, in Morrison County, Minnesota, USA, in August 1998 (Table 1). Pairwise alignment and comparison of the 1,390-nt region (463 aa) spanning the Gn and Gc glycoprotein–encoding M segment indicated differences of 33.6%–41.9% and 32.7%–47.4% at the nucleotide and amino acid levels, respectively, from representative hantaviruses harbored by Murinae, Arvicolinae, Neotominae, and Sigmodontinae rodents (Table 2). No insertions or deletions were found in the regions sequenced compared with sequences of other hantaviruses. The new hantavirus, designated Camp Ripley virus (RPLV), showed sequence similarity of 98.1%–98.5% among the 3 strains.

Analysis of a 490-nt (163-aa) region of the L genomic segment amplified from 2 of the 3 shrews indicated that RPLV differed from rodentborne hantaviruses by 26.8%–34.1% at the nucleotide level and 20.7%–34.5% at the amino acid level (Table 2). RPLV differed from Tanganya virus (TGNV), a hantavirus detected recently in the Therese shrew (Crocidura theresae) in Guinea (7), by 27.3%–28.8% and 24.0%–25.0%, respectively. The higher degree of sequence similarity in the L segment between RPLV and other hantaviruses probably signifies the limits of functional preservation of the RNA-dependent RNA polymerase. 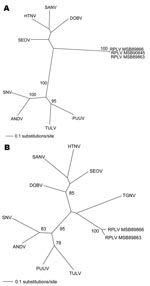 Figure. Phylogenetic trees generated by maximum likelihood method and generalized time reversible + I + G model of evolution as estimated from data on alignment of the partial (A) 1,390-nt medium (M)–...

Repeated and exhaustive phylogenetic analyses based on nucleotide and deduced amino acid sequences of the M and L genomic segments generated by the maximum-likelihood method indicated that RPLV was distinct from rodentborne hantaviruses (with high bootstrap support based on 100 maximum likelihood replicates) (Figure). Similar topologies were consistently derived by using various algorithms and different taxa (including La Crosse virus) and combinations of taxa, which suggested an ancient evolutionary origin. However, definitive conclusions about the molecular phylogeny of RPLV and its relationship to TGNV and other soricidborne hantaviruses must await complete-genome sequence analyses.

As we had previously encountered in sequencing the entire genome of TPMV (J.-W. Song, R. Yanagihara, unpub. data), the divergent genome of RPLV presented challenges in designing suitable primers for RT-PCR. We were also constrained by the limited availability of tissues from the 3 infected shrews and the need to retain small portions of tissues for future virus isolation attempts. Consequently, we have been hitherto unable to obtain the full-length sequence of RPLV.

Given the sympatric and synchronistic coexistence of northern short-tailed shrews with Neotominae and Arvicolinae rodents (such as Peromyscus leucopus and Microtus pennsylvanicus) and their ferocious territorial behavior, hantavirus spillover may be possible. Viruses closely related antigenically to Hantaan virus have been isolated from the Asian house shrew (Suncus murinus), greater white-toothed shrew (Crocidura russula), and Chinese mole shrew (Anourosorex squamipes) (10–12), which suggests that shrews are capable of serving as incidental hosts for hantaviruses typically harbored by rodents.

Shrews that harbor genetically distinct hantaviruses pose a compelling conceptual framework that challenges the long-accepted dogma that rodents are the sole reservoirs of hantaviruses. Viewed within the context of the recent detection of TGNV in the Therese shrew in Guinea, the identification of RPLV in the northern short-tailed shrew in the United States indicates that renewed efforts, facilitated by the rapidly expanding sequence database of shrew-borne hantaviruses, will lead to the discovery of additional hantaviruses in soricids throughout Eurasia, Africa, and the Americas. Our preliminary studies indicate 3 other novel soricid-borne hantaviruses in the Republic of Korea, Vietnam, and Switzerland. To establish if >1 of these newly identified hantaviruses is pathogenic for humans will require development of robust serologic assays (13) and application of other sensitive technologies, such as microarray analysis (14,15), for rapid detection of shrewborne hantavirus RNA in human tissues and bodily fluids.

This work was supported in part by grants P20RR018727 (Centers of Biomedical Research Excellence) and G12RR003061 (Research Centers in Minority Institutions) from the National Center for Research Resources, National Institutes of Health, Bethesda, MD, USA.