In France, through exhaustive active surveillance, ≈17.1 million adult cattle were tested for bovine spongiform encephalopathy from July 2001 through July 2007; ≈3.6 million were >8 years of age. Our retrospective Western blot study of all 645 confirmed cases found that 7 were H-type and 6 were L-type.

Most cases of bovine spongiform encephalopathy (BSE) have shown strikingly uniform features. The origin of epidemics, mainly in the United Kingdom but to a lesser extent in other countries, has been foodborne contamination by a single major strain of the transmissible spongiform encephalopathy (TSE) agent (1,2). However, in recent years, 2 distinct forms of the disease have been described; these forms deviate phenotypically from the previously identified classic BSE (C-type) (3,4). Western blot studies of the protease-resistant prion protein (PrPres) showed higher and lower molecular masses of unglycosylated PrPres in these 2 types, subsequently named H-type and L-type compared with C-type BSE (5). In L-type BSE, the most discriminant molecular feature was the lower level of diglycosylated PrPres (4,5). Such cases have now been identified in a number of different countries (6–8).

The origin of H-type and L-type BSE cases is unknown, but they may represent spontaneous or so-called sporadic forms of TSE, reminiscent of most cases of Creutzfeldt-Jakob disease in humans. Transmission studies in wild-type mice (9) or in transgenic mice expressing the bovine PrP gene (5,10–12) have shown that the infectious agents involved in H-type and L-type BSEs differ from the single strain isolated from C-type BSE.

Epidemiologic data are crucial to our understanding of the origin of such cases, but precise prevalence needs to be determined. The prevalence in cattle can now be assessed with accuracy because exhaustive BSE testing of adult cattle was implemented in 2001 in all European member states (January 1 for abattoirs and July 1 for rendering plants). We report the results of a retrospective study to determine the frequency of H-type and L-type BSE identified in France since July 2001.

A retrospective Western blot study was performed for all confirmed BSE cases diagnosed in France after July 1, 2001, as previously described (13). Briefly, PrPres was extracted using the TeSeE Western blot confirmatory assay (Bio-Rad, Marnes-la-Coquette, France) according to the manufacturer’s instructions. For immunoblotting, antibodies RB1, 6H4 (R-Biopharm, St. Didier au Mont d’Or, France), Sha31 from the TeSeE Western blot (Bio-Rad), and SAF84 (kindly provided by J. Grassi, Commissariat Energie Atomique, Saclay, France) were used; these antibodies recognize the bovine PrP sequences 110–113, 156–164, 156–163, and 175–180, respectively. Two Western blot assays were conducted on the brainstem samples and used either an antibody against the PrP core (RB1, 6H4, or Sha31) or a C-terminal antibody (SAF84) (13). The characteristics of H-type and L-type BSE (6,13) that were sought included 1) a higher or lower molecular mass of unglycosylated PrPres with core antibodies in H-type and L-type BSE compared with C-type BSE, 2) a lower proportion of diglycosylated PrPres in L-type BSE, and 3) presence of an additional band at ≈14 kDa with SAF84 in H-type BSE. All cases with features of H-type or L-type BSE were then subjected to further Western blot analyses for detailed quantitative analysis of PrPres molecular features (apparent molecular masses and glycoforms proportions).

Among the 645 BSE cases confirmed between July 1, 2001, and July 1, 2007, 7 H-type and 6 L-type isolates were identified; these had occurred at a frequency of 0–3 H-type and 1 L-type case per year, compared with 6–219 cases of C-type BSE per year (Table). Molecular typing of 48 of these 645 samples was not possible because low levels of PrPres prevented detailed molecular characterization or because sample amount was insufficient. All 13 atypical cases were detected in cattle >8 years of age, from fallen stock (9 cases) or abattoir (4 cases); not 1 atypical case was found among the 98 BSE cases detected by clinical surveillance during this period. These 13 atypical cases were diagnosed by the different rapid BSE tests routinely used in France: 9 by Prionics-Check Western, LIA, or Priostrip (AES, Combourg, France), 3 by ELISA Bio-Rad, and 1 by IDEXX HerdChek (IDEXX Laboratories, Schiphol-Rijk, the Netherlands). During retrospective interviews, the farmer and veterinarian for 6 of these animals reported clinical signs consistent with TSE in 3 fallen stock. This series of 13 cases identified since the beginning of exhaustive active surveillance should be compared with a total of ≈17.1 million adult cattle tested, of which ≈3.6 million were >8 years of age. In addition to these 13 cases, the first case of atypical (H-type) BSE was identified in 2000, during an exhaustive active surveillance program in rendering plants in a limited region of France. 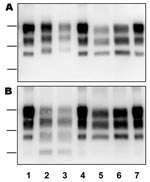 The distribution of BSE-infected cattle by birth date (Figure 1) shows that 1 or 2 (H- or L-type cases) were eventually found positive by rapid tests of the brainstem in each annual birth cohort from 1986 through 1997, which compares with up to 221 cattle infected with C-type BSE born during 1990–2001 for which BSE was diagnosed during 2001–2007. All H-type and L-type BSE cases showed similar features (Figure 2) regarding the high apparent molecular masses of unglycosylated PrPres (mean difference of ≈1 kDa using 6H4 antibody) for H-type BSE and lower levels of diglycosylated PrPres (mean difference of 35% using 6H4 antibody) for L-type BSE, compared with C-type BSE. For L-type BSE cases, the differences in apparent molecular masses were more obvious for the diglycosylated band (≈1-kDa difference using 6H4, compared with 0.3 kDa for the unglycosylated band), as previously observed (6). The ≈14-kDa band characteristic of H-type BSE was similarly detected in the 8 isolates with SAF84 antibody but in none of the other cases classified as L-type or C-type BSE.

This study involved exhaustive molecular typing of BSE cases during a given test period and in a country in which BSE testing has been mandatory for all adult slaughtered or fallen cattle. France tests more animals than any other European country; ≈30% of the animals tested in the European Union are tested in France. The estimated frequency of H-type and L-type BSE was 0.41 and 0.35 per million adult cattle tested, respectively (1.9 and 1.7 in cattle >8 years of age). Given the implementation dates of measures to control BSE and the birth dates of these BSE-infected cattle, foodborne exposure to an infectious agent cannot be fully excluded for any of these cattle. However, the distribution of cattle affected by H- and L-type BSE, by year of birth, differs strikingly from that of cattle affected by C-type BSE and is consistent with the hypothesis that H-type and L-type BSE might represent sporadic prion disorders. In comparison with another sporadic prion disease, the annual frequency of sporadic Creutzfeldt-Jakob disease in humans, which is estimated only by analyses of reported clinically suspect cases, is 1–2 cases per million. Similar studies in other countries, instead of those free of C-type BSE, would be useful. An alternative hypothesis to foodborne contamination, such as contamination by a scrapie agent, cannot be fully excluded, as such contamination has been shown to be a risk factor for scrapie in sheep (14).

This study relied on the identification of BSE cases by examination of the brainstem only, as derived from our knowledge of C-type BSE (15). We cannot exclude possible differences in the pathogenesis of atypical BSEs that might result in underestimation of their frequency, e.g., involvement of the brainstem at a later stage than with C-type BSE. This possibility is at least suggested by data available for L-type BSE, which shows a preferential distribution of abnormal PrP in more rostral brain regions (4,12). Studies of the pathogenesis of these novel BSE forms are thus important for understanding of prion disorders of domestic ruminant species.

Dr Biacabe is a senior scientist at the Agence Française de Sécurité Sanitaire (AFSSA) – Lyon. Her research focuses on studies of prion diseases of ruminants and humans, including diagnosis and characterization of the disease-associated prion protein, with particular emphasis on atypical forms of these diseases in cattle.

We gratefully acknowledge Michèle Lavoine for her excellent technical assistance.