Influenza A viruses are divided into subtypes according to the serologic reactivity of the surface glycoproteins hemagglutinin (H1–H16) and neuraminidase (N1–N9). Aquatic birds are regarded as the natural reservoir for influenza A viruses; a few mammalian hosts are infected by a limited number of virus subtypes. The first evidence of the H3N8 subtype, which currently circulates in horses, crossing species barriers was reported after an outbreak of respiratory disease among racing greyhounds in Florida in 2004. Isolation of virus from 1 case and detection of specific antibodies in other cases identified equine influenza virus as the cause of the outbreak (1). This information led us to reexamine an outbreak of severe respiratory disease that occurred in a pack of 92 English foxhounds in the United Kingdom in September 2002.

The outbreak was signaled by a sudden onset of coughing. Some hounds became lethargic and weak; in some, these signs progressed to loss of consciousness. One hound died and 6 were euthanized. Postmortem examination of the hound that died (case 1) and 1 that was euthanized (case 2) showed subacute broncho-interstitial pneumonia; virus was suspected as the cause. When they were puppies (≈8 weeks of age), the hounds had been inoculated with commercially available vaccines against the major canine respiratory and enteric viruses. Postmortem tissue samples submitted to a canine infectious diseases laboratory were negative for known canine viral pathogens (e.g., canine herpesvirus, adenovirus, parainfluenza virus). The diagnosis as to the cause of the pneumonia, returned in 2002, was “unknown, suspected viral etiology.”

In January and March 2005, serum samples were obtained from the hounds affected by the respiratory disease outbreak in 2002 (pack 1). Serum samples were obtained from another 3 packs of foxhounds in the same region of the United Kingdom during December 2004 through February 2005. Samples were collected from 31–33 hounds (equivalent numbers of males and females) in each pack, ranging in age from 9 months to 9 years. The serum was screened for antibodies by using the single radial hemolysis assay (2). None of the samples contained antibodies to the strains that were included in the assay to control for nonspecific reactivity: equine H7N7 subtype strain A/equine/Prague/56 and the human influenza virus strain A/Puerto Rico/8/34 (H1N1). Antibodies to the H3N8 subtype strains A/equine/Newmarket/1/93 and A/equine/Newmarket/2/93 were, however, detected in 9 of the samples obtained during the first visit to pack 1 (Table). Of these, 8 were from hounds that had survived the outbreak in 2002; however, 1 was from a hound (no. 22) born after the outbreak in another part of the United Kingdom, which suggests that the 2002 outbreak might not have been the only incident of equine influenza to have infected hounds in the United Kingdom. Another 3 positive serum samples were obtained during a second visit to pack 1, and a repeat sample from hound no. 22 again had positive results. The specificity of the antibodies for equine influenza A (H3N8) strains was confirmed by hemagglutination inhibition assays that included human influenza (H3N2) strain A/Scotland/74 (data not shown). 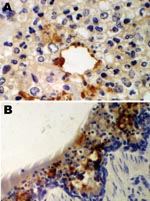 An immunohistochemical test to detect influenza A virus that used equine influenza–specific rabbit polyclonal antiserum was applied to formalin-fixed paraffin-embedded (FFPE) tissues from the 2 hounds that were examined postmortem in 2002 (3). Immunostaining of lung tissue showed positive staining in areas of pneumonic change; infected cells had the morphology of epithelial cells and macrophages (Figure 1). Immunostaining of visceral tissues (lung, liver, spleen, myocardium, intestine, pancreas, and oropharynx) was negative.

Deparaffinization of the FFPE lung tissue from the 2 hounds was performed as described previously (4) with a few modifications. RNA was extracted from the sample pellets obtained using the QIAamp viral RNA Mini Kit (QIAGEN, Hilden, Germany) according to the manufacturer’s instructions. Ten different primer pairs designed to amplify short (<250-bp) products from the matrix hemagluttinin and neuraminidase genes were used (details available from the authors on request). Reverse transcription–PCR (RT-PCR) was carried out by using the QIAGEN OneStep RT-PCR Kit. Only 1 primer pair (forward: 5′-AGGCAGGATAAGCATATACT-3′ and reverse: 5′-GTGCATCTGATCTCATTACA-3′, amplifying nucleotides 735–871 of the hemagglutinin gene) yielded an amplification product, which was purified by using PCR Kleen Spin Columns (Bio-Rad, Hercules, CA, USA) and sequenced by using the BigDye Terminator v1.1 cycle sequencing kit (Applied Biosystems, Foster City, CA, USA). A BLAST search with the 74-bp nt sequence obtained from this amplicon confirmed that the virus shared 100% identity with the equine influenza (H3N8) strains Newmarket/1/93 (5) and Newmarket/5/03 (6). This region contains 2 phylogenetically informative sites. Lysine at position 261 indicates that the virus belongs to the American lineage (5); this is supported by the presence of isoleucine at position 242 because all European lineage strains isolated since 1998 have valine at 242. 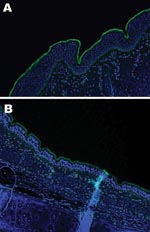 An important factor in interspecies transmission is the ability of the hemagglutinin protein of the virus to bind to certain receptors on the host cells before the virus is internalized. Although all influenza A viruses recognize cell surface oligosaccharides with a terminal sialic acid, their receptor specificity varies; it is thought that species-specific differences in the distribution of linkages on respiratory epithelial cells influences the ability of influenza A viruses to transmit between species. Respiratory tract tissue samples were obtained within 2–4 hours of death from a horse and a greyhound, each euthanized for reasons other than this study, and rinsed extensively to remove surface mucous. The tissues were stained by immunofluorescence by using the lectins Sambucus nigra (SNA, specific for SAα2,6 galactose(Gal)/N-acetylgalactosaminide) and Maackia amurensis (MAA, specific for SAα2,3) as previously described (7). The MAA lectin bound strongly to the equine tracheal epithelium (Figure 2, panel A), which confirms the finding that the NeuAc2,3Gal linkage preferentially bound by equine influenza viruses is found on sialyloligosaccharides in the equine trachea (7). The MAA lectin also bound strongly to the canine respiratory epithelium (Figure 2, panel B) at all levels of the respiratory tract examined (distal, medial and proximal trachea; primary and secondary bronchi), which suggests that receptors with the required linkage for recognition by equine influenza virus are available on canine respiratory epithelial cells, although further subtle differences in receptor specificity may exist. The SNA lectin, specific for SAα2,6Gal, which did not bind to the equine tracheal epithelium, showed some binding to the canine epithelium (data not shown).

Because the hounds infected in 2002 were housed near horses, it is possible that the virus was transmitted from infected horses by the usual (aerosol) route. However, during the week before onset of clinical signs, the hounds had been fed the meat of 2 recently euthanized horses from independent sources. That viral antigen expression was confined to the lungs indicates a respiratory rather than oral route of infection. It is possible that eating respiratory tissue from an infected horse led to inhalation of sufficient virus particles to initiate a respiratory infection. Consumption of infected bird carcasses has been implicated in the transmission of highly pathogenic avian influenza virus of the H5N1 subtype to tigers and leopards (8) and a dog (9) and was demonstrated experimentally by feeding virus-infected chicks to domestic cats (10).

We are grateful to the referring veterinary surgeon; the owners and handlers of the foxhound packs; the Canine Virus Unit, University of Glasgow; and Greg Dowd, who performed the immunostaining.