We confirmed the emergence of bluetongue virus (BTV) in 5 wild ruminant species in Spain. BTV seroprevalence was high and dispersed with time, with a south-to-north gradient. Our results suggest a complex epidemiology of BTV and underline the need for additional research on wildlife in Europe.

In October 2004, an outbreak of bluetongue caused by bluetongue virus serotype 4 (BTV-4) occurred in southern Spain (www.oie.int/hs2/zi_pays_mald.asp?c_pays=58&c_mald=10&annee=2004). Since then, several BTV-4 outbreaks have occurred in livestock in Spain. Recently, BTV-1 emerged in Spain and caused several outbreaks in livestock (www.oie.int/wahid-rod/public.php?page=single_report&pop=1&reportid=5799). In addition, BTV-8 emerged in central Europe in 2006 (1) (www.oie.int/esp/press/es_061023.htm). New outbreaks of BTV-8 occurred in 2007, and this virus serotype was recently detected in the United Kingdom (www.oie.int/wahid-prod/public.php?page=disease_immediate_summary).

BTV is a vector-borne pathogen; Culicoides species biting midges (Diptera: Ceratopogonidae) are its biologic vectors (2). The main BTV vector in Europe is C. imicola (2), a seasonal species that appears from late May to November (3). Other Culicoides species may also be vectors of BTV in Europe (4,5; www.oie.int/esp/press/es_061023.htm). BTV is distributed worldwide between the latitudes 42°30′N and 35°S (6), but it has recently spread northward (1,7). The potential for economic losses make BT a disease reportable to the World Organisation for Animal Health.

Several wild ruminant species are susceptible to BTV infection (8–10). Red deer (Cervus elaphus) and roe deer (Capreolus capreolus) are the most common wild ruminants in Spain; mouflon (Ovis aries), fallow deer (Dama dama), and aoudad (Ammotragus lervia) are less common (11). The distribution and density of wild ungulates have increased in recent decades in Spain (12), but the role of European wild ruminants in the epidemiology of BTV is unknown.

When diseases are transmitted between wildlife and livestock, wildlife disease research is an important tool in establishing effective disease control programs. The risk of wildlife acting as BTV reservoirs and relevant epidemiologic factors need to be explored (13). The situation in Spain, with well-distributed wild ruminant species and the presence of BTV vectors and BTV-4, led us to study the status of these ruminants in the epidemiology of BTV.

The study area included the southern half of peninsular Spain. This area was selected on the basis of the distribution of C. imicola and the geographic distribution of BTV-4 outbreaks in livestock and the associated animal movement restriction area (www.mapa.es).

Blood samples were obtained from 2,233 red deer, 106 fallow deer, 44 roe deer, 72 mouflon, and 10 aoudad during 2003–2007 in 62 locations (Figure 1). Most (n = 1,575) of the red deer samples and all samples from other ruminant species were collected from hunted animals; some samples (n = 658) from red deer were collected on 5 farms. These farms were located in the Alcornocales (ALC), Sierra Morena (SM), Guadiana Valley (GU), Montes de Toledo (MT), and Sistema Central (SC) areas. Most (69%) samples were collected during the hunting season (October–February). Samples were not obtained during certain periods because of logistic surveillance constraints (online Appendix Table, available from www.cdc.gov/EID/content/14/6/951-appT.htm). Sex and age of red deer were determined, the latter according to tooth eruption patterns (14). Animals <1 year of age were classified as juveniles, those 1–2 years of age as subadults, and those >2 years of age as adults.

Blood was collected into sterile tubes from the heart or thoracic cavity from hunted animals and by cervical puncture from farm animals. Samples were centrifuged, and serum was stored at –20°C. Antibodies to BTV in sera were detected by using a competitive ELISA (Pourquier ELISA Bluetongue Serum; Institut Pourquier, Montpellier, France) according to manufacturer’s instructions. The inhibition value of the ELISA for domestic ruminants has been found to be applicable for testing serum from wild ruminants (15).

We expected a south-to-north gradient in the expansion of BTV across Spain as observed in livestock. Thus, sampling sites were grouped into 6 areas according to a south-to-north gradient (Figure 1). These areas included southern (ALC), south-central (SM, GU, and MT), and central (Toledo Province and SC) Spain. On the basis of annual distribution of BT outbreaks in Mediterranean countries (2), a year was defined as the period July–June. 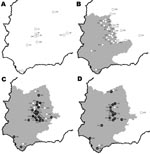 BTV seroprevalence in red deer decreased along a south-to-north gradient and increased throughout the years sampled (online Appendix Table, available from www.cdc.gov/EID/content/14/6/951-appT.htm and Figure 2). Mean seroprevalence was slightly higher in males and adults but dependent on the sampling area (online Appendix Table, available from www.cdc.gov/EID/content/14/6/951-appT.htm). Because the first evidence of contact with BTV occurred in 2005, observed seroprevalences can be considered as incidence rates. Thus, in 2005–2006, the incidence rate was higher in subadults than in adults and juveniles.

The presence of antibodies to BTV in wild ruminants has recently been studied in Belgium (A. Linden, pers. comm.) and Germany (www.efsa.europa.eu/EFSA/DocumentSet/appx6_bluetongue_S8_en.pdf). In 2006, BTV seroprevalence was 0.58% in Belgian cervids. The survey in Germany showed BTV seroprevalence rates of 0.09% in red deer, 5.7% in roe deer, and 4.9% in mouflon. Our study provides evidence that BTV is present in wild ruminants in Europe over a large area.

We observed similar spatial and temporal BTV patterns in red deer (Figure 2) and livestock. Nevertheless, we found the first evidence of contact with BTV 1 year later in red deer than in livestock. This delay may have been caused by larger numbers of samples from livestock than from wild ruminants. However, our findings suggest that wild ruminants, particularly cervids because of their wider distribution in Europe, could be used as sentinels for surveillance of BTV. Moreover, the high BTV seroprevalence in cervids from the southernmost sampling area suggests that cervids may not interfere with vaccinations given in this region.

This study shows an increased distribution of BTV across Spain and that wild ruminants in Europe can be infected with BTV. Our findings, combined with those of earlier studies, suggest a complex epidemiologic scenario of BTV in Europe with many susceptible hosts, an increase in its main vector because of climate changes, and the appearance of new competent vectors. Nevertheless, more information on the role of susceptible wild ruminant species is needed to clarify the complexity of BTV epidemiology in Europe.

Dr Ruiz-Fons is a postdoctoral researcher at the Macaulay Land Use Research Institute in Aberdeen, Scotland. His primary research interests are the epidemiology of diseases in wildlife, especially those shared with livestock, and the study of factors related to risks for disease transmission at the wildlife/livestock interface.