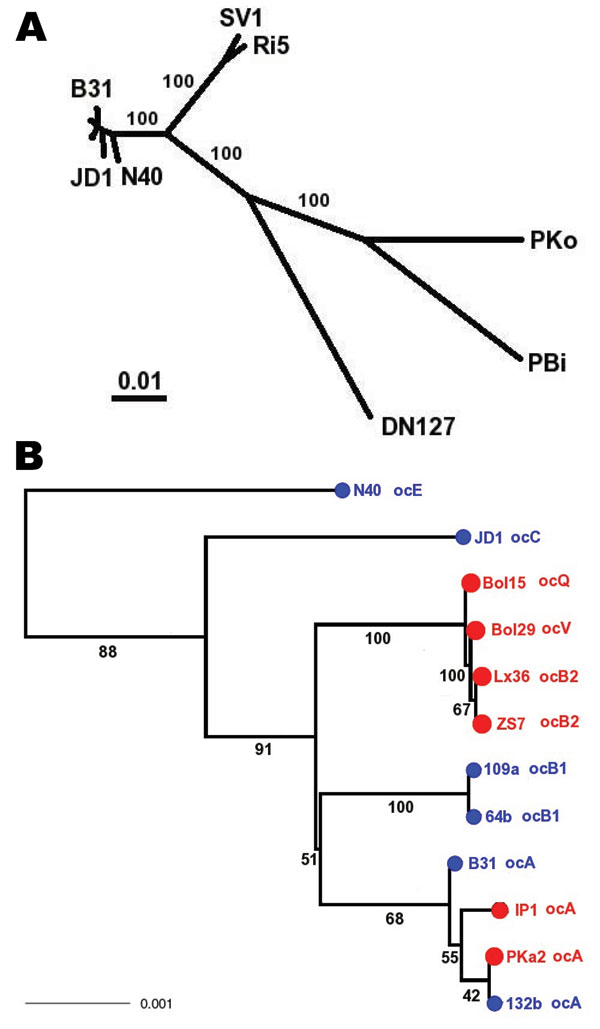 Figure 2. Species phylogeny based on concatenated sequences at housekeeping loci. Seventeen isolates include 1 Borrelia garinii strain (PBi), 1 B. afzelii strain (PKo), 1 B. bissettii strain (DN127), 2 strains of an unnamed genomic species (SV1 and Ri5), and 12 B. burgdorferi sensu stricto isolates. These strains were selected for reconstructing interspecies phylogeny (hence species samples), as well as for resolving the clade containing clonal groups A and B (A, B1, and B2 are represented by 2 isolates). Sequences at 6 chromosomal housekeeping loci (gap, alr, glpA, xylB, ackA, and tgt) were obtained for each strain, with B31 and PBi sequences from published genomes (29,36), N40, JD1, PKo, and DN127 sequences from draft genomes (S. Casjens et al. pers. comm.). Sequences of the remaining strains were obtained by direct sequencing. The total length of concatenated alignment is 7,509 nt. A) Consensus of maximum likelihood trees obtained by using DNAML of the PHYLIP package (33). Branch support values are based on 100 bootstrapped replicates of the original alignment. B) Enlarged view of B. burgdorferi sensu stricto subtree. Tips were colored by geographic origin of the isolate (blue, North America; red, Europe) and were labeled with ospC major-group allele type. Scale bars indicate number of nucleotide substitutions per site.