Quinolones are antimicrobial drugs effective against gram-negative bacteria. These drugs have been widely used as alternatives to conventional drug therapy for treating Mycobacterium spp. and Neisseria spp. infections. Quinolone resistance is frequently caused by mutations in DNA gyrase and topoisomerase IV chromosomal genes and an increased activity of efflux pumps that reduce intracellular concentrations of the drug (1).

Resistance to these drugs has been attributed to plasmid-mediated qnr genes. These genes are found mainly in Enterobacteriaceae and affect the dynamics of development and acquisition of quinolone resistance. Until now, all plasmid-borne qnr determinants were associated with atypical sul-type integrons, which are characterized by a duplication of a 3′ conserved segment, and a putative recombinase known as open reading frame (ORF) 513 (2). In contrast to typical gene cassettes, these qnr genes lack the attC site and, consequently, are unable to move by class 1 integrase excision. Qnr-like proteins coded by chromosomal genes have been found in Vibrionaceae, and this family has been identified as the source of qnr genes (3,4). However, no qnr homolog was found in any Vibrio cholerae genome sequenced.

V. cholerae O1 isolates from the cholera epidemic in Brazil (1991–2000) were screened for antimicrobial drug resistance and class 1 integrons. VC627, a clinical strain from the Amazon region isolated in 1998, was resistant to ciprofloxacin, in contrast to other isolates. This strain was the only one positive for class 1 integrase but not for qacEΔ1 and sulI genes (6). Sequence analysis of the variable region of this class 1 integron showed an aadA2 gene cassette and an ORF similar to qnr determinants. Its deduced amino acid sequence showed 69% sequence identity with a chromosomal protein of Photobacterium profundum, which was recently identified as a quinolone-resistance determinant (QnrPP) (3) and 57% identity with QnrA1, a plasmid-encoded protein found in Enterobacteriaceae (2). This new qnr-like gene in V. cholerae was named qnrVC1 (EU436855). 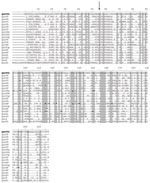 Appendix Figure. Deduced amino acid sequence comparison of QnrVC1 from class 1 integron with plasmid- and chromosomal-mediated Qnr determinants. The glycine residue linking the 2 domains of the pentapeptide proteins is indicated...

Qnr proteins belong to the pentapeptide repeat family, which consists of uninterrupted pentapeptide repeats comprising 92% of the sequence and play a role in DNA gyrase protection (7). These repeat features were observed in the QnrVC1 deduced amino acid sequence with the consensus sequence [AC][DN][LF]XX (amino acids in brackets are found more frequently and XX indicates other amino acids) (8) (Appendix Figure), with a large proportion of serine residues in the fourth position (first X), as observed by Robicsek et al. (2). 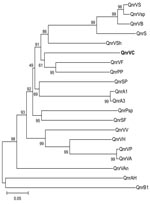 The qnrVC homologs in chromosomes of other bacterial species were investigated by using BLAST analysis (www.ncbi.nlm.nih.gov/blast/Blast.cgi). Similar to other reports of such homologs (3,4), we found Qnr-like proteins in recently published genomes from different families, including other members of Vibrionaceae (Figure). Analysis in conjunction with informatics capabilities (in silico analysis) showed a 657-nt sequence in a class 1 integron of V. cholerae O1 isolated in Vietnam in 2004 (AB200915). This ORF had 75% nt similarity with qnrVC1, and it was designated qnrVC2.

The qnrVC gene cassettes are characterized by attC sites, which are absent in all others qnr genes already identified. Supporting the hypothesis of Vibrionaceae as the source of qnr genes (3), the qnrVC1 attC site has 89% identity with V. parahaemolyticus repeats, and the qnrVC2 putative attC site has 96% identity with a V. cholerae repeat sequence, both of which are characteristic structures of SIs. Rowe-Magnus et al. (5) reported that SI repeat recombination sites are species specific and these elements would be the source of gene cassettes found in drug-resistance integrons, such as class 1 integrons. Therefore, we hypothesize that qnrVC1 gene cassette could have originated from a V. parahaemolyticus SI, whereas qnrVC2 originated in V. cholerae. Curiously, no chromosomal qnr genes identified in Vibrionaceae were associated with SIs.

The qnrVC1 gene showed high amino acid divergence compared with all qnr genes described, with similarities ranging from 44% to 69%. The qnrVC1 had a G + C content of 36.8%, which is considerably different from that of the V. cholerae genome (47.5%) and is evidence of horizontal gene transfer.

Promoter Pc, which is found in the 5′ conserved segment of the integron carrying qnrVC1, was identical to the hybrid configuration described (9,10) and is defined by 1 point mutation in the canonical –35 region. The hybrid Pc version has 20-fold lower promoter activity than that of the wild-type (strong) promoter. However, another study verified expression of genes inserted into integrons under the control of a hybrid Pc configuration (11). Moreover, in silico analysis detected a putative promoter (–35 TTGAGA [17 nt] –10 TAGTCT) in the 5′ untranslated region of the qnrVC1 gene cassette. Therefore, our findings characterize conditions for qnrVC1 expression in the class 1 integron.

Our study reports characterization of 2 new qnr genes associated with SI attC sites in typical class 1 integrons and their emergence in V. cholerae. These genetic features have not been observed in either chromosomal- or plasmid-borne qnr determinants already described.

Our study suggests that, at least in Vibrionaceae, quinolone-resistance genes were mobilized from SIs by class 1 integrase activity because qnrVC1 and qnrVC2 attC elements are similar to V. parahaemolyticus and V. cholerae SI repeats. These findings corroborate the hypothesis that SIs are a source of cassettes present in drug-resistance integrons (5). These elements are part of a reasonable scenario for a 1-step acquisition of quinolone resistance by bacteria (e.g., Mycobacterium spp. and Neisseria spp.). This acquisition may jeopardize treatment and control and have adverse consequences on infections caused by these organisms.

This work was supported by a fellowship from Conselho Nacional de Desenvolvimento Científico e Tecnológico, a grant from the Instituto Oswaldo Cruz, and the Plataforma de Desenvolvimento Technólogico em Insumos para a Saúde for sequencing.