Recent efforts to control spread of epidemic infectious diseases have prompted health officials to develop rapid screening processes to detect febrile patients. Such screening may take place at hospital entry, mainly in the emergency department, or at airports to detect travelers with increased body temperatures (1–3). Infrared thermal imaging devices have been proposed as a noncontact and noninvasive method for detecting fever (4–6). However, few studies have assessed their capacity for accurate detection of febrile patients in clinical settings. Therefore, we undertook a prospective study in an emergency department to assess diagnostic accuracy of infrared thermal imaging. 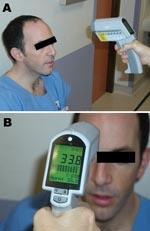 Figure 1. Measurement of cutaneous temperature with an infrared thermometer. A) The device is placed 20 cm from the forehead. B) As soon as the examiner pulls the trigger, the temperature measured is...

The main objective of our study was to assess diagnostic accuracy of infrared thermometry for detecting patients with fever, defined as a tympanic temperature >38.0°C. The second objective was to compare measurements of cutaneous temperature and tympanic temperature, with the latter being used as a reference point. Data are expressed as mean ± standard deviation (SD) or percentages and their 95% confidence intervals (CIs). Comparison of 2 means was performed by using the Student t test, and comparison of 2 proportions was performed by using the Fisher exact method. Bias, precision (in absolute values and percentages), and number of outliers (defined as a difference >1°C) were also recorded. Correlation between 2 variables was assessed by using the least square method. The Bland and Altman method was used to compare 2 sets of measurements, and the limit of agreement was defined as ± 2 SDs of the differences (11). We determined the receiver operating characteristic (ROC) curves and calculated the area under the ROC curve and its 95% CI. The ROC curve was used to determine the best threshold for the definition of hyperthermia for cutaneous temperature to predict a tympanic temperature >38°C. We performed multivariate regression analysis to assess variables associated with the difference between tympanic and infrared measurements. All statistical tests were 2-sided, and a p value <0.05 was required to reject the null hypothesis. Statistical analysis was performed by using Number Cruncher Statistical Systems 2001 software (Statistical Solutions Ltd., Cork, Ireland).

Infrared thermometry does not reliably detect febrile patients because its sensitivity was lower than that expected and the positive predictive value was low, which indicated a high proportion of false-positive results. Ng et al. (5) studied 502 patients, concluded that an infrared thermal imager can appropriately identify febrile patients, and reported a high area under the ROC curve value (0.972), which is similar to the area we found in the present study (0.925). However, such global assessment is of limited value because of low incidence of fever in the population. Rather than looking at positive predictive value or accuracy, one should determine negative predictive value. This determination might be of greater consequence if one considers an air traveler population or a population entering a hospital.

Ng et al. (5) identified outdoor temperature as a confounding variable in cutaneous temperature measurement. Our study identified age as a variable that interferes with cutaneous measurement, but the role of gender is less obvious. Older persons showed impaired defense (stability) of core temperatures during cold and heat stresses, and their cutaneous vascular reactivity was reduced (12,13).

Use of a simple infrared thermometry, rather than sophisticated imaging, should not be considered a limitation because this method concerns the relationship between cutaneous and central core temperatures. We can extrapolate our results to any devices that estimate cutaneous temperature and the software used to average it. Our study attempted to detect febrile patients, not infected patients. For mass detection of infection, focusing on fever means that nonfebrile patients are not detected. This last point is useful because fever is not a constant phenomenon during an infectious disease, antipyretic drugs may have been taken by patients, and a hypothermic rather than hyperthermic reaction may occur during an infectious process.

In conclusion, we observed that cutaneous temperature measurement by using infrared thermometry does not provide a reliable basis for screening outpatients who are febrile because the gradient between cutaneous and core temperatures is markedly influenced by patient’s age and environmental characteristics. Mass detection of febrile patients by using this technique cannot be envisaged without accepting a high rate of false-positive results.

Dr Hausfater is an internal medicine specialist in the emergency department of Centre Hospitalier Universitaire Pitié-Salpêtrière in Paris. His primary research interests are biomarkers of infection and inflammatory and infectious diseases.

We thank David Baker for reviewing the manuscript.