Enterovirus 71 (EV71), a member of the family Picornaviridae and the genus Enterovirus, is a common cause of hand, foot, and mouth disease in children. Infection with this virus is rarely complicated by severe neurologic disease, such as meningitis, brain stem encephalitis, neurogenic pulmonary edema, and acute flaccid paralysis. EV71 was first isolated in 1969 (1), and during the subsequent 30 years, outbreaks were reported in the United States, Europe, and Asia (2). Since 1997, several major outbreaks with deaths have occurred in the Asia-Pacific region, notably in Sarawak (East Malaysia), Peninsular Malaysia, Taiwan, Australia, Singapore, Japan, and Vietnam (3–10).

Brunei is situated on the island of Borneo (4°30′N, 114°E) and has a population of ≈370,000. From February through August 2006, Brunei experienced its first reported major outbreak of EV71. More than 1,681 children reportedly were affected, with 3 deaths resulting from severe neurologic disease. We report the virologic findings from this outbreak.

During March through October 2006, samples from at least 100 patients from Brunei diagnosed with hand, foot, and mouth disease or herpangina were received at the University Malaya Medical Center, Kuala Lumpur, Malaysia. Samples were inoculated into Vero and A549 cell cultures for virus isolation. EV71 was isolated from 34 patients (including 2 who died of severe neurologic complications), and an additional 7 isolates were obtained from Malaysian patients seen at the University Malaya Medical Center during the outbreak period in Brunei (Table 1). Adenovirus also was isolated from stool or rectal swabs of 4 patients, of whom 2 were coinfected with EV71; none had neurologic disease. 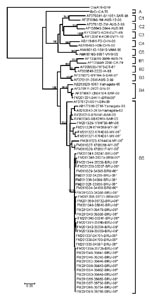 Figure. Phylogenetic relationships of enterovirus 71 partial viral protein (VP1) gene sequences. The prototype coxsackievirus A16 (CoxA16-G10) was used as the outgroup virus. The phylogenetic tree shown was constructed by using the...

Enteroviral RNA was extracted from cell cultures using QIAamp Viral RNA Mini Kit (QIAGEN, Hilden, Germany), and reverse transcription–PCR was performed to amplify the viral capsid protein (VP1) gene at nt positions 31–861. The primers used were VP1F 5′-CAGGCTAGCATGGGAGATAGGGTGGCAGATGTGATCGAGAGC-3′ and VP1R 5′-GGTGGATCCCAAAGGGTAGTAATGGCAGTACGACTAGTGCCGGT-3′. The 831-nt partial VP1 gene fragments were sequenced, and phylogenetic relations of the sequences were examined using selected enterovirus reference strains obtained from GenBank (Table 2). Sequences were aligned and phylogenetic trees were drawn using the neighbor-joining method (Figure), as described (12). Maximum-likelihood tree showed similar clustering and is not shown. The prototype coxsackievirus A16 (CoxA16-G10) was used as the outgroup virus for construction of the phylogenetic tree.

The phylogenetic tree, drawn on the basis of the alignment of the VP1 gene sequences, showed 3 independent genogroups (A, B, and C) with the prototype BrCr strain as the only member of genogroup A (11). Within each of genogroups B and C, 5 additional subgenogroups were identified, designated B1–B5 and C1–C5 (8,10). Although no definitions have been established, generally there is nucleotide variation of ≈16%–20% between genogroups and differences of ≈6%–12% between subgenogroups within each genogroup (5,11).

The different genogroups of EV71 are widely distributed around the world (2). The continuing appearance of new EV71 subgenogroups in recent years in the Asia-Pacific region suggests that the virus is continuously evolving (5,8,9). The annual rate of evolution is estimated at 1.35 ×10–2 substitutions per nucleotide, similar to poliovirus (11). In some countries, outbreaks occur in a cyclical pattern every 3 years, predominantly caused by strains that are distinct from previous outbreaks (3,9). These strains often have been detected in other countries in the region in years preceding the outbreak. In some EV71 outbreaks, other enteroviruses cocirculate, particularly coxsackievirus A16 or EV71 from a different subgenogroup (3,8,10). On the basis of the samples received in the study, the Brunei 2006 EV71 outbreak was caused by subgenogroup B5 virus. Apart from the single isolate from subgenogroup B4, no other enteroviruses were isolated, although 2 patients also had adenovirus. Occasional EV71 and adenovirus co-infection has been reported (13), also without association with severe disease. The low sequence diversity and predominance of the Brunei B5 isolates in this outbreak suggest recent introduction and subsequent rapid spread, without the concurrent spread of other genogroups, subgenogroups, or enteroviruses.

Other than its northern coastline, Brunei is surrounded entirely by the East Malaysian state of Sarawak. In 2006, an outbreak of EV71 affected approximately 14,400 children in Sarawak (14). Thus, temporally and geographically, the Brunei and Sarawak outbreaks were related, raising the possibility that the same strains were involved. Sarawak had experienced EV71 outbreaks every 3 years (1997, 2000, and 2003), caused by subgenogroups B3, B4, and B5, respectively (3). However, no sequence results from the Sarawak 2006 outbreak are available for comparison. All subgenogroup B5 isolates reported seem to have diverged from an ancestral strain related to strain 5511/SIN/00 (GenBank accession no. AF376121), isolated in Singapore as early as 2000 (3). Subsequently, subgenogroup B5 emerged in Japan (8) and Sarawak (3) in 2003, before appearing in Peninsular Malaysia and Brunei in 2006. The source of the Brunei outbreak remains unclear, and it may not be one of these countries where subgenogroup B5 has already been reported. However, EV71 subgenogroup B5 clearly continues to diverge, and further subgenogroups are likely to arise.

In summary, the first reported major outbreak of EV71 in Brunei was caused by strains from subgenogroup B5 that were distinct from other reported B5 isolates, suggesting a recent introduction from an as-yet-unidentified source. Hence, continued molecular surveillance of EV71 in Asia is required to further our understanding of factors influencing the evolution of the virus and its association with emergence of outbreaks in the region.

Dr AbuBakar is a professor and head of the Department of Medical Microbiology, Faculty of Medicine, University of Malaya, Malaysia. His research interests include pathogenesis and emerging virus infections.

We thank the Virology Laboratory, Department of Laboratory Services, RIPAS Hospital, and the Disease Control Division, Public Health Department, Ministry of Health of Brunei Darussalam, for their work during the outbreak.

The study was funded in part by Top Down grant 36-02-03-6002 from the Ministry of Science, Technology and Innovation, Malaysia, and by grant FQ016-2007A from University Malaya, Kuala Lumpur, Malaysia.

Page created: November 19, 2010
Page updated: April 23, 2012
Page reviewed: April 23, 2012
The conclusions, findings, and opinions expressed by authors contributing to this journal do not necessarily reflect the official position of the U.S. Department of Health and Human Services, the Public Health Service, the Centers for Disease Control and Prevention, or the authors' affiliated institutions. Use of trade names is for identification only and does not imply endorsement by any of the groups named above.