To determine the difference in age-specific immunoprotection during waves of influenza epidemics, we analyzed excess monthly death data for the 1918–1920 influenza pandemic in Taiwan. For persons 10–19 years of age, percentage of excess deaths was lowest in 1918 and significantly higher in 1920, perhaps indicating lack of immunoprotection from the first wave.

Recent studies have focused on quantifying the global effects of the influenza pandemic of 1918–1920 (1–3). This pandemic swept through Taiwan in 2 waves, at the end of 1918 and again in early 1920, causing devastating loss of human life. A report about the devastation brought by the first wave of the influenza epidemic, published in February 1920 (4), indicated that as of December 15, 1918, a total of 779,522 persons (20.8% of the population) had been infected and 25,394 persons had died from influenza; case-fatality rate was 3.26% (4,5). Although the number of infections decreased dramatically in early 1919, a second wave of the epidemic at the end of that year created another severe death toll.

Previous studies have shown that excess deaths, similar to those noted in the temperate zones, were also observed in Taiwan, which is in a tropical–subtropical zone, during periods of previously recognized influenza epidemics (6,7). A recent study has also shown Taiwan to be an evolutionarily leading region for global circulation of influenza virus A (H3N2) (8). Therefore, we analyzed the 1918–1920 pandemic in Taiwan to contribute to understanding of and preparation for possible future pandemic events.

Using data from the 1895–1945 Statistical Abstract of Taiwan (9), we compared monthly deaths during the 2 waves of epidemics in 1918 and 1920 with deaths during corresponding nonpandemic periods of the adjacent years. For example, we compared monthly deaths for November and December 1918 with the mean deaths for November and December 1916–1917 and 1919–1922. Statistically significant excess deaths were computed by detecting the data points at which the all-cause deaths exceeded the mean of the adjacent years +2 SDs (6,10). Excess deaths, computed from the mean number of deaths at these data points, were then used to ascertain the effect of the pandemic on deaths during these periods. During 1918–1920, population data were divided into 3 major groups: Taiwanese (95.2%), Mainland Chinese (0.57%), and Japanese–Korean (4.2%). However, only records of all-cause deaths for Taiwanese and Japanese were available and used in our analysis.

Figure 1 gives the mean monthly number of all-cause deaths and 95% confidence intervals (CIs) for each month during 1916–1922, excluding the known anomaly months (the 2 epidemic waves) of November–December 1918 and January–February 1920. The number of deaths increased markedly during the anomaly months. When we plotted the anomaly points against the actual number of deaths, we noted that the anomaly points were significantly >2 SDs above the means and that substantial excess deaths had indeed occurred. Moreover, we estimated the excess deaths during these 2 waves by subtracting the mean number of all-cause deaths from the number of deaths during the anomaly periods (Table 1). Because the 2 waves of epidemics had overlapped the adjacent months, we also included increases during these months. 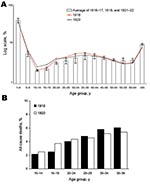 Ample literature describes the unusual age-specific death patterns for the 1918–1920 pandemic (11–13). To compare the age-specific differences between the 2 waves, we compared the percentages of all-cause deaths of persons 10–39 years of age in 1918 with the corresponding percentages of all-cause deaths for the same groups of persons, who 2 years later were 12–41 years of age (Figure 2, panel B).

In 1918, the epidemic swept through all 12 administrative districts on the island in <1 month. Given that the population of Taiwan has increased >6-fold since then and that the current population is much more mobile and travels more, a future outbreak of a similarly virulent influenza virus strain could conceivably spread through the island in a few days. The total estimated number of excess deaths is 51,048 (95% CI 41,998–61,853). Given the average Taiwan population size during 1918–1920, the percentage of excess deaths was 1.38% (95% CI 1.14–1.68). Given the population of Taiwan at the end of 2007, the number of persons killed by an epidemic of similar magnitude today would be ≈315,000 (95% CI 259,900–384,000). Pandemic readiness planning for Taiwan, or any other country, must consider the potential magnitude of a similar-sized pandemic.

Dr Hsieh is an applied mathematician and a professor in the Department of Public Health, China Medical University. His primary research interests focus on mathematical and statistical modeling and analysis of infectious disease epidemiology.

I thank Chi-Ho Chan for helpful discussion and am grateful to the anonymous referee and the associate editor for constructive comments, which substantially improved this paper.