Influenza A pandemic (H1N1) 2009 virus RNA was detected by reverse transcription–PCR in 144 clinical samples from Bonn, Germany. A common rapid antigen–based test detected the virus in only 11.1% of these samples. The paramount feature of rapid test–positive samples was high virus concentration. Antigen-based rapid tests appear unsuitable for virologic diagnostics in the current pandemic.

In Germany, 5,324 cases were confirmed by July 30 (3). Almost 50% (n = 2,184) of these cases occurred in the federal state of North Rhine-Westphalia in western Germany, where our institution is located. As of July 30, we had tested 1,838 suspected cases and confirmed 221. All testing was based on real-time reverse transcription–PCR (RT-PCR) specific for the hemagglutinin (HA) gene of pandemic (H1N1) 2009 virus in clinical specimens. Although the real-time RT-PCR format provides considerably decreased turnaround times in molecular diagnostics, delays associated with shipping of samples and laboratory-based testing are a concern when many patients have to be seen in short time. Antigen-based rapid assays can be used as bedside tests and have been successfully applied in studies of influenza caused by the seasonal strains A (H1N1) and A (H3N2) (4).

To evaluate the clinical applicability of a widely distributed rapid test in patients with pandemic (H1N1) 2009 virus, we retrospectively tested 144 PCR-positive clinical specimens from 144 different patients with the BinaxNOW Influenza A&B Rapid Test (Inverness Medical, Cologne, Germany). The assay uses monoclonal antibodies directed against the influenza A and B nucleoproteins (NP).

During preanalytical preparation, all of our samples (nasal and throat swabs) had been eluted from the swab in 500 µL of 0.9% sodium chloride solution and used for RNA extraction. The remaining part of the suspension was immediately stored at −70°C until use in this study. Before inclusion in the study, presence of pandemic (H1N1) 2009 virus in RNA extracts of all 144 samples was confirmed with a second pandemic (H1N1) 2009 virus–specific real-time RT-PCR targeting the matrix gene. Virus concentrations in samples were determined from the RNA extract without thawing the original sample, using real-time RT-PCR for the HA gene. Absolute quantification was done using photometrically quantified RNA in vitro transcripts, according to methodology described earlier (5). 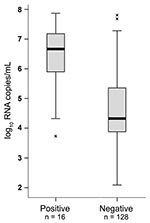 The BinaxNOW assay was used exactly according to the manufacturer’s instructions on 100 µL of freshly thawed original sample. Of 144 PCR-confirmed cases, only 16 could be detected by using the rapid antigen–based test, corresponding to a sensitivity of merely 11.1% (95% confidence interval 6.7–17.7). Samples that yielded positive results in the rapid test had a median concentration of 4,570,880 RNA copies/mL of suspension (range 5,370–74,131,020) (Figure). This contrasted with 20,089 (range 120–64,565,420) median viral RNA copies in the rapid test–negative group. This difference was highly significant at p<0.001 (1-way analysis of variance [ANOVA], F = 38.824, done on logarithmic RNA concentrations).

Because children tend to have higher influenza virus shedding than adults, the overall better sensitivity of the antigen-based rapid test in preceding influenza A seasons might be due to sample selection effects because the current pandemic leads to higher percentages of adult samples than does regular seasons. The median age in our cohort was 18 years (range 1–59 years), with no significant age difference between rapid test–positive and –negative patients (1-way ANOVA, p = 0.246, F = 1.356). Most of the samples from earlier influenza A seasons originated from children <7 years of age (2008, median 3 years, range 1–17 years; 2009, median 4 years, range 1–67 years).

In agreement with our study, a recent report by Faux at al. on the detection of pandemic (H1N1) 2009 virus by rapid antigen test found low clinical sensitivity for the QuickVue Influenza assay (Quidel, San Diego, CA, USA) in comparison to RT-PCR (11). These authors found clinical sensitivity of QuickVue to be ≈51%. Notably, earlier studies on seasonal influenza have identified 27% clinical sensitivity for the same assay in comparison to RT-PCR (12), and the higher sensitivity for pandemic (H1N1) 2009 virus observed by Faux et al. might be due either to a rather small sample size in this early study (39 patients) or a different composition of the cohort (military personnel) as opposed to our study. Nevertheless, our clinical observations are supported by recent reports suggesting low analytical sensitivity of antigen-based assays on cultured pandemic (H1N1) 2009 virus (13,14) and clinical material analyzed using 2 different antigen-based rapid tests, virus culture, and a Luminex-based multiplex assay (15). A synopsis of data suggests clearly that testing of patients suspected of pandemic (H1N1) 2009 infection with antigen-based assays may produce misleading results in clinical practice. Application of such assays should be discouraged in favor of continued molecular diagnostics.

Dr Drexler is a physician and clinical virologist affiliated with the University of Bonn. He is working on the implementation of methods for affordable viral load monitoring and the characterization of novel human and zoonotic viruses.