Because the prevalence of methicillin-resistant Staphylococcus aureus (MRSA) differs among the 3 countries forming the Euregio Meuse-Rhin (EMR) region (Belgium, Germany, and the Netherlands), cross-border healthcare requires information about the spread of MRSA in the EMR. We investigated the emergence, dissemination, and diversity of MRSA clones in the EMR by using several typing methods. MRSA associated with clonal complexes 5, 8, 30, and 45 was disseminated throughout the EMR. Dutch isolates, mainly associated with sequence types (ST) ST5-MRSA-II, ST5-MRSA-IV, ST8-MRSA-IV, and ST45-MSRA-IV had a more diverse genetic background than the isolates from Belgium and Germany, associated with ST45-MRSA-IV and ST5-MRSA-II, respectively. MRSA associated with pigs (ST398-MRSA-IV/V) was found in the Dutch area of the EMR. Five percent of the MRSA isolates harbored Panton-Valentine leukocidin and were classified as community-associated MRSA associated with ST1, 8, 30, 80, and 89.

Almost one third of the European population lives in a border region (Euregio). These border regions have collaborated since the late 1950s, especially in the field of healthcare (1). Cross-border patient mobility and free access to healthcare facilities within the European Union in general, and the Euregios in particular, are important for patients, medical doctors, healthcare facilities, and healthcare insurance companies. The Euregio Meuse-Rhin (EMR), an area totaling 4,973 square miles (12,882 km2), is the border region of Belgium, Germany, and the Netherlands. The EMR comprises the Belgian provinces of Limburg and Liège, the German-speaking region of Belgium, the Aachen region in Germany, and the southern part of the Dutch province of Limburg. Each year, thousands of the 3.88 million inhabitants of the EMR cross the border to consult a medical specialist or a healthcare facility. Since 2003, hospitals in the EMR have built a strong collaboration. For example, the University Hospital Maastricht in the Netherlands and the University Hospital Aachen in Germany have an official agreement for the transfer of patients; consequently, dozens of patients are transferred each year between the 2 hospitals. The same applies for the University Hospital Maastricht in the Netherlands and the General Hospital Vesalius in Belgium, between which nearly 100 patients are transferred each year. In an official publication of the European Commission (D. Byrne, Maastricht Conference on Cross-Border Health Care, Maastricht, the Netherlands, June 8, 2004), the EMR was mentioned as a model region for the European Union in the field of cross-border healthcare and cross-border cooperation of hospitals. Furthermore, in July 2008, establishment of a pan-European university hospital was announced, a collaboration among the university hospitals of Maastricht in the Netherlands and Aachen in Germany.

Of particular concern is cross-border dissemination of multidrug-resistant bacteria, such as methicillin-resistant Staphylococcus aureus (MRSA). The 3 countries forming the EMR differ considerably in the prevalence of hospital-isolated MRSA (23.6%, 13.8%, and 0.6% in Belgium, Germany, and the Netherlands, respectively) (2). Consequently, cross-border transfer of patients may affect the dissemination and prevalence of MRSA, particularly when patients are transferred from countries with a relatively high prevalence to a country with a low prevalence.

A study of MRSA isolates from the EMR between December 1999 and February 2004 showed that isolates from clonal complex (CC) 5 and CC 8, which harbor the resistance elements staphylococcal cassette chromosome mec (SCCmec) types I–IV, had been disseminated in the EMR (2). Our aim was to investigate the emergence, dissemination, and diversity of MRSA clones in the EMR during a 10-month period in 2005 and 2006 and to compare the results with those of the previous study. We used sequencing of the short sequence repeat (SSR) region of the S. aureus protein A gene (spa typing), multilocus sequence typing (MLST), and SCCmec typing by PCR to investigate the genetic background of all MRSA isolates. The spa locus was typed to provide more detailed information about prevalent MRSA clones in the EMR, especially because the previous study used only MLST analyses on a small subset of isolates (2). Finally, because an increase of Panton-Valentine leukocidin (PVL)–positive MRSA isolates in the Netherlands has recently been observed (3), we investigated the possible spread of PVL-positive MRSA clones into hospitals in the EMR, as well as the prevalence of the virulence factors collagen adhesion (CNA) and toxic shock syndrome toxin-1 (TSST-1).

We investigated 257 MRSA isolates, cultured during July 2005–April 2006 from 8 geographically closely related hospitals in the EMR. The hospitals included 1 hospital in Belgium (General Hospital Vesalius, Tongeren, 355 beds), 2 hospitals in Germany (General Hospital Dūren, 521 beds, and Marien Hospital, Aachen, 321 beds), and 5 hospitals in the Netherlands (Atrium Medical Center, Heerlen, 811 beds; Orbis Medical and Care Center, Sittard, 578 beds; Laurentius Hospital, Roermond, a 458-bed general hospital; University Hospital Maastricht, a tertiary hospital, 680 beds; and VieCuri Medical Center, Venlo, a 554-bed general hospital). The 257 MRSA isolates comprised 44 from Belgium, 92 from Germany, and 121 from the Netherlands. Isolates from the Belgian and German hospitals were from patients with MRSA infection; Dutch isolates were from patients carrying MRSA who were admitted to the Dutch hospitals. All isolates were identified as S. aureus by Gram stain, catalase, and coagulase testing. The presence of the mecA gene was determined as described previously (2).

The susceptibility pattern of the MRSA isolates was determined according to the guidelines of the Clinical and Laboratory Standards Institute (4). Susceptibility to the following antimicrobial agents was determined as MIC: cefaclor, cefuroxime, clindamycin, ciprofloxacin, clarithromycin, gentamicin, linezolid, moxifloxacin, oxacillin, penicillin, rifampin, teicoplanin, tetracycline, trimethoprim/sulfamethoxazole, and vancomycin. The susceptibility to fucidic acid and mupirocin (Rosco, Taastrup, Denmark) was determined by using the disk-diffusion method (5,6). MRSA isolates resistant to clarithromycin were tested for inducible clindamycin resistance by using the D-test (7).

Real-time amplification of the spa gene was performed as described previously, followed by sequencing of the SSR region (13). The spa types were clustered into spa-CCs using the algorithm Based Upon Repeat Pattern (BURP) with the Ridom StaphType version 1.4 software package (www.ridom.de). Because spa typing, together with the algorithm BURP, yields results concordant with typing results obtained by MLST and pulsed-field gel electrophoresis (13), the associated CCs, as determined with MLST, were allocated through the Ridom SpaServer (http://spaserver.ridom.de). To confirm the association between MLST and spa typing, in combination with BURP, MLST was performed on a representative set of 12 strains of each major spa type and spa-CC (2).The presence of CNA, PVL, and TSST-1 was determined with real-time PCR assays (14,15). 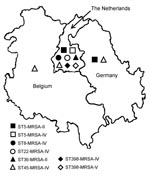 Because cross-border healthcare is an issue in the EMR, and the prevalence of MRSA differs among the countries forming the EMR, studying the possible emergence, spread, and diversity of MRSA clones within and among these countries is important (2). In addition to MRSA clones from CC5 and CC8, found previously in the EMR, we observed MRSA isolates from CC30 and CC45. Furthermore, the Dutch isolates had a more heterogeneous genetic background than did MRSA isolates from Belgium and Germany. The prevalence of PVL-positive MRSA isolates, belonging to ST1, 8, 30, 80 and 89, was higher than that found in the previous study (5% vs. 1.3%) (2).

The antimicrobial susceptibility of the MRSA isolates depends on the S. aureus lineage. The observation that the Dutch MRSA isolates were more often susceptible to ciprofloxacin and moxifloxacin than were isolates from Belgium and Germany can be explained by the fact that the isolates associated with ST5-MRSA-IV, ST22-MRSA-IV, and ST30-MRSA-IV, which were susceptible to ciprofloxacin and moxifloxacin, were mainly observed in the Netherlands. Although ST22-MRSA-IV is commonly susceptible to tetracycline, the ST22-MRSA-IV isolates in this study were resistant to tetracycline (16). S. aureus can harbor resistance genes on mobile genetic elements on the genome, such as Tn554, as well as on plasmids, and these can be exchanged among S. aureus lineages, possibly because of antimicrobial drug pressure (17).

Primarily because of the Dutch “search-and-destroy” policy, isolates derived from colonized persons were available from the Netherlands, whereas isolates from Belgium and Germany were derived from infections. However, nasal carriers are at increased risk of acquiring MRSA infection (18). Consequently, not preventing the spread of MRSA among nasal carriers could lead to MRSA infection among these persons. Furthermore, the molecular epidemiology of MRSA can vary widely among hospitals. In the Dutch hospitals of the EMR, MRSA clones in each hospital were diverse, whereas in the Belgian hospital and 2 German hospitals, 1 MRSA clone predominated, showing that the number of hospitals is unlikely to have biased the results of our study.

We could not determine the SCCmec type for 10% of the MRSA isolates by using the method of Oliveira et al. (8). This percentage was similar to that found in other studies (30,31) but higher than the 3% previously found in the EMR (2). The relatively large number of nontypeable SCCmec types found in this study, probably formed by homologous recombination among SCCmec elements, supports the need for a new system for SCCmec typing and nomenclature (19).

Previous studies have shown that MRSA isolates classified as community-associated usually harbor either SCCmec type IV or V, and often PVL, but may differ in their genetic backgrounds (CC1, CC8, CC30, CC59 and CC80) (34). In the EMR, 5% of the MRSA isolates were positive for PVL, which is higher than the previously reported 1.3% (2). Thus, PVL-positive MRSA isolates with a heterogeneous genetic background are emerging in the EMR.

PVL-positive MRSA isolates associated with ST8-MRSA-IV, ST30-MRSA-IV, and ST80-MRSA-IV have been isolated in the Netherlands (3,35). In the present study, 2 of the PVL-positive MRSA isolates harbored SCCmec type V. The different genetic background of these isolates, i.e., ST89 and ST772, a single-locus variant of ST1 at the pta locus, might suggest that SCCmec type V was introduced on different occasions into different S. aureus lineages. A PVL-positive ST772-MRSA-V has been observed in Germany (36). One of the PVL-positive isolates harbored SCCmec type I, and such isolates with a ST30 and ST37 genetic background have been described in the Netherlands (3). Although a recent study suggested that CNA and PVL combined contribute to virulence, only 6 of the 11 PVL-positive MRSA isolates from the EMR harbored the cna gene (37). Further studies are needed to investigate the contribution of the combination of CNA and PVL to virulence.

The genetic background of 1 PVL-positive ST45-MRSA-IV isolate from Belgium was similar to that of the Berlin clone. Hitherto, only PVL-negative isolates with this background have been found in EMR countries (19,20). PVL-positive MRSA isolates, associated with the major CA-MRSA clones (ST8-MRSA-IV, ST30-MRSA-IV, and ST80-MRSA-IV) have been reported from Belgium (38). Because PVL is situated on a phage, the genes encoding PVL might have been transferred to S. aureus with a CC45 genetic background (34).

The cna gene has been previously observed among MRSA isolates from CC22, CC30, and CC45 (23,29). Therefore, the presence of the can gene might, together with spa typing, be used as a marker for different genetic backgrounds.

MRSA clones associated with the hospital associated-MRSA CCs 5, 8, 22, 30, and 45, the PVL-positive CA-MRSA CCs 1, 8, 30, 80, and 89, as well as MRSA related to pigs (ST389-MRSA-IV/V) were observed in the EMR. Dissemination of these clones is possible because of the introduction of new MRSA clones associated with travel; with patients who have previously been admitted to a hospital abroad (cross-border healthcare); or with other high-risk patients, such as pig-farmers and their families. Therefore, a cross-border search-and-contain policy may help control the further spread of MRSA and reduce the financial cost to hospitals, nursing homes, and the community in the EMR.

Dr Deurenberg is a postdoctoral fellow at the Department of Medical Microbiology at the University Hospital Maastricht. His research interests focus on molecular diagnostics, mechanisms of antimicrobial drug resistance, and the molecular epidemiology of S. aureus.

The study was partly performed within the framework of the Interreg-III project “Cross-Border Health Care in the Euregio Meuse-Rhin.”