Since late 2007, several outbreaks of porcine epidemic diarrhea virus (PEDV) infection have emerged in Thailand. Phylogenetic analysis places all Thai PEDV isolates during the outbreaks in the same clade as the Chinese strain JS-2004-2. This new genotype PEDV is prevailing and currently causing sporadic outbreaks in Thailand. 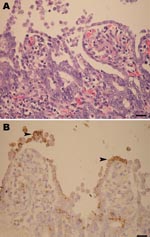 During late 2007, the PED outbreak appeared first in Nakornpathom province before spreading throughout the country. Pig losses from the recent PED outbreaks were extensive. Obvious clinical signs were severe diarrhea (Figure 1, panel A) and dehydration with milk curd vomitus in suckling piglets. Most of the affected farms reported the disease first in farrowing barns and subsequently lost 100% of newborn piglets. Pigs of all ages were affected and exhibited degrees of diarrhea and inappetite, which varied by their ages. Boars and sows had mild diarrhea and anorexia for a few days and recovered within a week. In piglets that died, the small intestinal wall was congested and intestinal contents were watery with undigested milk curd (Figure 1, panel B). Segmental enteritis was indicated by segmental disappearance of intestinal lacteal caused by malabsorption in affected intestinal parts (Figure 1, panels C and D). Atrophic enteritis, characterized by blunting of the intestinal villi and sloughing of intestinal epithelium, occurred in all affected piglets (Figure 2, panel A). Immunohistochemical tests, performed by using monoclonal anti-PEDV S protein (JBT Biotechnology Laboratory, Seoul, South Korea), demonstrated dark brown staining in intestinal epithelial cells (Figure 2, panel B). Massive feedback of piglet feces and minced piglet guts to gestating sows was recommended by local veterinary practitioners to prime the sow’s immune response and pass protective immunity to the piglets. At affected farms, the outbreak lasted <3 weeks.

Samples from 8 provinces (24 farms) in Thailand from December 2007 through March 2008 were submitted to the veterinary diagnostic laboratories of Kasetsart University and Chulalongkorn University. A total of 33 porcine samples were confirmed as positive for PEDV by reverse transcription–PCR (RT-PCR) (4) before virus isolation (Table). Published primers (5) were used for generating the PEDV 651-bp partial S gene. Primers were designed to amplify the PEDV M gene and yielded the amplified product of 715 bp on the basis of CV777 and Br1/87. Products were purified by using a QIAquick Gel Extraction Kit (QIAGEN, Hilden, Germany) and were sequenced by 1st BASE Pte Ltd (Singapore).

The M gene sequence analysis of 31 PEDV isolates obtained in Thailand indicated that the nucleotide sequence of the entire M gene was highly conserved. All recent PEDV isolates in Thailand had 99.3%–100% nucleotide homology. The lowest sequence identity (96.5%) was with the Chinese strain, EF185992/LZC, and the highest sequence identity (99.2%–99.7%) was with the Chinese strain, JS-2004-2, and concurrent isolates from the National Institute of Animal Health, Thailand, M_NIAH 07-08 (data not shown).

All 33 PEDV isolates had 97.0%–98.8% DNA sequence identities of the S gene with each other. Our findings demonstrated that the recent PEDV isolates in Thailand were genetically diverse in their S genes either within their group or with the reference strains. These point mutations may lead to genetic diversity among these isolates. The lowest sequence identity (95.7%) was with the Korean strain, Chinju99. Similar to the M gene results, the highest sequence identity of the S gene (98.6%) was with the Chinese strain, JS-2004-2 (data not shown). 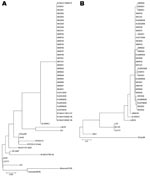 Appendix Figure. Phylogenetic trees generated on the basis of nucleotide of the M gene region (A) and the partial S gene region (B). Trees constructed with neighbor-joining method by using MEGA 3.1 (DNAStar...

Our results indicated that the recent Thai PEDV isolates clustered in the same group were highly homologous with the Chinese strains, JS-2004-2 and LJB/03. They were responsible for the recent PED outbreak in Thailand and able to produce pathologic effects similar to the Chinese isolates (6). Notably, 08NP04, isolated 4 months after the first outbreak, had the highest identity to JS-2004-2. Also, 08NP04 and 07NP01 (the first isolates in 2007) originated in the same geographic area. The Chinese-like strain of the virus might have gained entry into Thailand via unknown routes as early as December 2007. In addition, rendering trucks traveling from farm to farm might have encouraged widespread transmission of the disease. Structural differences in the partial S gene could help elucidate pathogenesis and antigenic structures of the recent PEDV isolates because S glycoproteins are responsible for inducing the virus neutralizing antibodies and known to be highly conserved in PEDV strains (7). Continuing investigation of PEDV isolates will contribute to the prevention and control of this virus.

The phylogenetic relationship of the Thai PEDV strain indicated that the recent Thai PEDV isolates differed genetically from previous Thai isolates. Despite precautions, sporadic outbreaks continue to occur. In addition, disease transmission frequently occurs due to the purchase of new stock with improper gilt acclimatization and biosecurity. Immunity induced through vaccination, currently unavailable in Thailand, does not provide lifelong protection from this virus. However, vaccination is recommended to encourage specific immunity to PEDV in all stock when an acute outbreak occurs. Undoubtedly, effective biosecurity is a key management tool for PED prevention and control. Our data suggested that all recent Thai PEDV isolates are genetically similar to the Chinese isolates identified in 2004. Further analysis of the entire S gene of PEDV and of other isolates in neighboring countries is needed to show the molecular epidemiology of the Chinese-like strain.

Dr Puranaveja is a diagnostician at the Veterinary Diagnostic Laboratory, Chulalongkorn University. His research interests include emerging diseases of public health significance.

We appreciate the technical help from Alongkorn Amonsin and Supradit Wangnaitham. We also thank the National Research Council of Thailand (2551-140) for financial support.