Tick-borne lymphadenopathy (TIBOLA), also called Dermacentor-borne necrosis erythema and lymphadenopathy (DEBONEL), is defined as the association of a tick bite, an inoculation eschar on the scalp, and cervical adenopathies. We identified the etiologic agent for 65% of 86 patients with TIBOLA/DEBONEL as either Rickettsia slovaca (49/86, 57%) or R. raoultii (7/86, 8%). 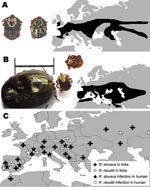 In 1968, Rickettsia slovaca, a spotted fever group (SFG) rickettsia, was isolated from Dermacentor marginatus ticks in the former Czechoslovakia before being detected in D. marginatus or D. reticulatus ticks throughout Europe (Figure 1) (1). In 1997, R. slovaca was described as a human pathogen and an agent of tick-borne lymphadenopathy (TIBOLA) (2). This syndrome, also called Dermacentor-borne necrosis erythema and lymphadenopathy (DEBONEL), is defined as the association of a tick bite, an inoculation eschar on the scalp, and cervical lymphadenopathies (3).

Since 1999, several rickettsial genotypes, called DnS14, DnS28, and RpA4, have been detected in Dermacentor spp. ticks throughout Europe (Figure 1). Isolates have been obtained and shown to belong to a unique new SFG rickettisia species named R. raoultii (4). In 2002, R. raoultii DNA was detected in a D. marginatus tick taken from the scalp of a patient in whom TIBOLA/DEBONEL developed in France (4). Moreover, DNA of what is now known to be R. raoultii has been found in the blood of 1 patient with TIBOLA/DEBONEL (5). The goal of this study was to identify the rickettsial agents in patients with TIBOLA/DEBONEL symptoms and in those who had an isolated tick bite on the scalp.

We included all patients with TIBOLA/DEBONEL symptoms (Figure 2) and those who had an isolated tick bite on the scalp without any symptoms from whom samples (serum, skin biopsy, or ticks harvested from the scalp) were received at our laboratory from January 2002 through December 2007. Epidemiologic and clinical data were collected retrospectively. The study was approved by the ethics committee of the Medicine School of Marseille under reference 08-008.

Among 98 study patients, 86 were classified as TIBOLA/DEBONEL patients. Twelve (12.2%) patients made up the second group with an isolated tick bite. All but 1 patient, who was bitten in Belgium, were bitten in France. Tick bites more frequently occurred from February through May (50/86, 58.1%). Because of results of serologic techniques, we could conclude that 66 (84.6%) of 78 TIBOLA/DEBONEL patients with obtained serum specimens had a recent rickettsial disease. Western blot and cross-adsorption analyses enabled detection of antibodies specifically directed against R. slovaca and R. raoultii in 34 and 4 patients, respectively (Appendix Table).

Two patients who were infected with R. slovaca were found to be co-infected with Coxiella burnetii in an acute form of Q fever. Serologic testing was performed in 12 patients with isolated tick bites, and results were negative in all cases. A total of 19 skin biopsy specimens were obtained. Four R. slovaca infections were diagnosed by regular PCR, and 3 isolates of this rickettsia were obtained. The suicide PCR on acute-phase serum samples identified 1 additional case of R. slovaca infection. Because of molecular tools and culture, 6 patients received the diagnosis of an R. slovaca infection, including 5 who did not receive a diagnosis by serologic assays (Appendix Table). Ticks removed from 28 TIBOLA/DEBONEL patients consisted of 23 D. marginatus (88.4%), 2 Dermacentor spp., 1 Haemaphysalis punctata, and 2 that were not identified. Overall, the tick studies enabled us to suggest the diagnosis of R. slovaca and R. raoultii infections in 10 and 3 patients, respectively, whose conditions were not diagnosed with previous tests (Appendix Table).

All DNA sequences obtained showed 100% identity with R. raoultii or R. slovaca, excluding the coexistence of several rickettsiae in the corresponding samples. According to our investigations, 49 (57%) of 86 patients with TIBOLA/DEBONEL had probable or certain R. slovaca infections, and 7 (8%) of 86 had probable R. raoultii infections. The characteristics of these patients are shown in the Table.

We report 86 patients with TIBOLA/DEBONEL; this group includes 14 patients whose conditions had been preliminarily reported (7). We also describe several cases caused by the emerging pathogen R. raoultii (4), including patients with indirect molecular evidence of infection because the pathogen was detected in the ticks that had bitten them. Original findings also include facial edema as a new clinical feature in TIBOLA/DEBONEL, and the report of the second patient co-infected with R. slovaca and C. burnetii (8). Because acute Q fever, a worldwide zoonosis, may be asymptomatic, we recommend that patients infected with tick-borne pathogens also undergo testing for concurrent infections with C. burnetii.

No TIBOLA/DEBONEL cases were recorded during the warmest summer months; peak incidence occurred during March–May and during September–November, linked with the activity of Dermacentor ticks in Europe (Figure 1) (9). However, to date, we have no explanation for the finding that children and women are at higher risk for TIBOLA/DEBONEL or why D. marginatus and D. reticulatus ticks prefer to bite persons on the scalp. A possible explanation could be that Dermacentor ticks usually bite hairy domestic and wild animals and the longer hair of women and children may attract them.

Moreover, R. raoultii seems to be more highly prevalent in D. marginatus and D. reticulatus ticks in nature than is R. slovaca. Although comparing field surveys of ticks is difficult because of the sampling methods, the sizes of the samples, and the potential PCR inhibitors, R. raoultii has been more frequently detected in D. marginatus ticks than has R. slovaca. In southeastern Spain, 73% of 101 D. marginatus ticks were infected by R. raoultii and 27% by R. slovaca (11). Similar differences have been shown in Germany, Portugal, the Netherlands, and Spain (12–15). Although interpreting these data definitively is difficult, the recurrence of similar published results by different teams suggests that exposure to R. raoultii through the bite of a Dermacentor spp. tick is likely more frequent than exposure to R. slovaca. However, more cases of R. slovaca infection have been recorded, which suggests that R. raoultii is less pathogenic.

TIBOLA/DEBONEL is a newly recognized disease, and its incidence is likely underestimated. In our laboratory, TIBOLA/DEBONEL is the most frequently reported rickettsial disease, except during the dry summer period. Doxycycline remains the treatment of choice, with new macrolides as alternative treatments (1). Although we report 6 more cases of R. raoultii infection in addition to the 2 recently reported (4,5), this Dermacentor-borne rickettsia seems to be less pathogenic than R. slovaca.

We thank all clinicians for help in collecting epidemiologic and clinical data.