The genetic backgrounds of 24 enterotoxigenic Escherichia coli (ETEC) strains from Mexico and Guatemala expressing heat-stable toxin (ST) and coli surface antigen 6 (CS6) were analyzed. US travelers to these countries and resident children in Guatemala were infected by ETEC strains of sequence type 398, expressing STp and carrying genetically identical CS6 sequences.

Enterotoxigenic Escherichia coli (ETEC) is one of the most common causes of acute watery diarrhea among children and adults in the developing world, causing ≈400 million diarrheal episodes and 380,000 deaths in children <5 years of age every year (1). The diarrhea is mediated by 1 or 2 plasmid-encoded enterotoxins; the heat-stable toxin (ST) and/or the heat-labile toxin (LT) (1). Approximately one third of all ETEC strains isolated globally reportedly produce ST only, one third produce LT and ST, and one third produce LT only (2). Two genotypes of ST exist in ETEC strains infecting humans: STp and STh (3). Colonization of the small intestine is mediated by adhesion to the epithelial cells by colonization factors (CFs), and one of the most common CFs detected on clinical ETEC isolates from different parts of the world is the plasmid-encoded coli surface antigen 6 (CS6) (4).

In a recent vaccine trial conducted in Mexico and Guatemala involving adult US travelers, ST-only strains expressing only CS6 and no other CF predominated among those infected with CF-positive ETEC; this toxin-CF profile (ST/CS6) was present in 35% of diarrheal cases (5). In other geographic regions, e.g., Egypt and Bangladesh, studies on childhood diarrhea have reported ST/CS6 frequencies of 6.6% and 19%, respectively (6,7). We conducted this study to investigate whether adult travelers in Mexico and Guatemala are infected with certain circulating ST/CS6 ETEC strains and to determine whether ETEC strains with the same E. coli clonal background may be infecting resident children in the same areas.

Seventeen clinical ST/CS6 isolates collected from adult US travelers, who were either visiting various locations in Guatemala or remaining at least 14 days in Antigua in Guatemala, or in Cuernavaca, Mexico, were included in the study. Isolates were collected from 1998 to 2001 during ETEC vaccine trials (5,8) or in 2002 and 2003 during a study of antimicrobial drug treatment (9). During June 2001–October 2003, clinical stool specimens were collected from children living in Santa María de Jesús in Guatemala as part of an ongoing childhood ETEC study (O. Torres, unpub. data). Seven CS6 isolates obtained from that study, collected in the summer of 2002, were included in the present study. Clinical isolates from both children and adults were shipped to Sweden, where toxin and CF profiles were confirmed as described (10). All strains in the study expressed STp, except for strain E874, which expressed STh.

Isolates were analyzed by multilocus sequence typing (MLST) by using the E. coli MLST scheme (http://mlst.ucc.ie/mlst/dbs/Ecoli), which is based on sequencing of internal regions of the 7 housekeeping genes adk, fumC, gyrB, icd, mdh, purA, and recA (11). PCR was performed as described but by using the same annealing temperature (54°C) for all genes. 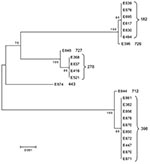 Figure. Dendrogram of the 24 enterotoxigenic Escherichia coli strains from Guatemala and Mexico included in the study, showing multilocus sequence type. Sequences were assembled with BioEdit and aligned using ClustalX within BioEdit...

The single STh/CS6 strain in the study, E874 from a child, was the only representative for MLST sequence type 443. This strain did not cluster closely with any of the other isolates by MLST (Figure). The 6 remaining isolates from the childhood study (all STp/CS6) clustered into sequence type 398. Three isolates from adult travelers collected in Antigua in Guatemala during 1998, 1999, and 2000 (E382, E447, and E670) and 1 collected from a traveler in Guatemala in 2003 (E850) also clustered into sequence type 398. The remaining adult travelers were infected by ETEC strains that clustered mainly into sequence types 182 (n = 6) and 278 (n = 4) (Table; Figure); these sequence types were found in Mexico and Guatemala during 1999–2002. Two of the strains, E830 (sequence type 182) and E837 (sequence type 278), were isolated from the same person on the same day, highlighting the possibility for several pathogens to simultaneously cause diarrhea.

A 540-bp internal region of the CS6 operon (cssABCD) encompassing the distal part of cssB, an intergenic untranslated region, and the proximal part of cssC, contains sequence differences in LT-only strains (14). Sequencing of the same region (performed as described [14]) in the 24 ST-only isolates in this study showed that all STp/CS6 isolates had identical CS6 sequences to the STp/CS6 ETEC strain GB124 (GenBank accession no. DQ538390, nt 815–1354) (14), isolated in Guinea Bissau. On the other hand, the only STh/CS6 isolate in the study, E874, had a different CS6 sequence with 7 nonsynonymous and 4 synonymous nucleotide substitutions compared with the other strains. The CS6 sequence of E874 was most similar to the CS6 sequence of the STh+LT–positive strain E10703 (GenBank accession no. U4844) (15), with only 2 adjacent nucleotide differences, resulting in a Q to R substitution at nt 139 of cssC in strain E874.

All STp/CS6 strains in the study had identical sequences in a region of the CS6 operon previously found to vary greatly in LT-only strains (14), even though the STp/CS6 strains represented 6 different MLST sequence types and were collected over 6 years and at different sampling sites in Guatemala and Mexico. This sequence was identical to the corresponding CS6 sequence in an STp/CS6 strain from Guinea-Bissau (14) but differed from the available sequences of ST/LT and LT-only CS6 strains (GenBank accession nos. UO4844, UO4846). This finding may indicate that plasmids carrying the genes for STp and CS6 are genetically conserved and have spread across the world because identical sequences were found in northern Latin America and in West Africa. Further studies have therefore been initiated to explore the genetics and epidemiology of ETEC strains expressing CS6 and STp in a global perspective.

Dr Nicklasson is a molecular microbiologist working at the World Health Organization Collaborating Centre for Research on Enterotoxigenic Escherichia coli (ETEC), which is located at the Institute of Biomedicine, Department of Microbiology and Immunology, University of Gothenburg. She recently held a research position at the Naval Medical Research Unit 3 in Cairo. Her main research interests are virulence gene expression and transmission pathways of ETEC.

This study was supported by the Swedish Agency for Research and Economic Cooperation (Sida-SAREC), the Marianne and Markus Wallenberg Foundation, and the Adlerbertska Scientific Foundation.