To assess the species distribution and epidemiologic trends of nontuberculous mycobacteria, we examined isolates from patients in Taiwan. During 2000–2008, the proportion increased significantly from 32.3% to 49.8%. Associated disease incidence increased from 2.7 to 10.2 cases per 100,000 patients. Mycobacterium avium complex and M. abscessus were most frequently isolated.

In Taiwan, the incidence of tuberculosis (TB) remains high despite advances in the antimycobacterial therapy and implementation of well-known TB control measures (1). Therefore, patients with acid-fast bacilli (AFB)–positive specimens, especially respiratory samples, are generally presumed to be infected with Mycobacterium tuberculosis and are treated with antituberculosis agents and placed in isolation rooms. Increased isolation of nontuberculous mycobacteria (NTM) causing mycobacterial diseases (2,3) implies that more patients with AFB-positive samples have received inappropriate or unnecessary empirical antituberculous treatment.

To assess prevalence of NTM isolates, we used the database of the National Taiwan University Hospital mycobacterial laboratory and prepared clinical specimens for mycobacteria cultures according to recommended guidelines (5). Before 2001, specimens were spread onto Lowenstein-Jensen slants and Middlebrook 7H11 medium (BBL; Becton, Dickinson and Company Diagnostic Instrument Systems, Sparks, MD, USA); since late 2001, they have been spread onto Lowenstein-Jensen slants and tested by the fluorometric BACTEC system (BACTEC Mycobacterium Growth Indicator Tube 960 system; Becton, Dickinson and Company). NTM were identified to the species level by using conventional biochemical methods. Some unidentified NTM species were further confirmed by sequencing of their 16S rRNA gene (1,464 bp) by using 2 primers (8FPL and 1492) as previously described (6,7). Diseases caused by NTM were defined according to previous description (4). Annual incidence and isolation ratio of TB and NTM over time were evaluated by the Cochran-Armitage test for trend. We considered p<0.05 to be significant. To define NTM disease incidence and prevalence, for patients who had isolates over successive years during the study period we included only the year in which they first appeared in the laboratory database. 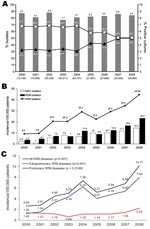 From January 2000 through December 2008, the laboratory received 283,394 clinical samples for mycobacterial culture. From a total of 23,499 (8.3%) specimens with positive mycobacterial culture results, M. tuberculosis were isolated from 14,295 (5.0%) specimens from 3,695 patients and NTM were isolated from 9,204 (3.2%) specimens from 4,786 patients. The trends of decreasing M. tuberculosis isolation and increasing NTM isolation were significant (p<0.05 for each) (Figure, panel A).

During the 9-year period, NTM accounted for 39.2% of positive mycobacterial cultures and increased significantly. In concordance with the increased incidence of NTM isolations, incidence of NTM diseases also increased significantly. The increase of NTM isolations since 2002 might have resulted from use of the BACTEC system. This apparent increase in NTM disease could also be attributed to increasing vigilance and awareness of these bacteria as human pathogens, improved methods of detection, or more immunocompromised hosts (e.g., as a result of tumor necrosis factor inhibitors, human interleukin 1 receptor antagonists, and anti-CD20 antibodies) (1,8).

Prevalence of mycobacteria species responsible for different diseases varies markedly by geographic region. In the United States and Japan, MAC and M. kansasii are the most common species (4), whereas in England and Scotland, M. kansasii and M. malmoense, respectively, are the most common (9). Our study showed that MAC was the most common NTM species in Taiwan, followed by M. abscessus. The most common organism in localized pulmonary infection and disseminated infection was MAC, and M. abscessus predominated in skin and soft tissue infection and lymphadenitis, consistent with findings of a previous study in Taiwan (2). Thus, M. abscessus deserves as much attention as MAC, especially for extrapulmonary NTM disease, in Taiwan.

Identification of clinical isolates beyond the genus level is crucial because NTM species differ in the clinical spectrum of the diseases they cause and in their susceptibility to antimicrobial drugs. Previous studies have demonstrated that the rare strains identified in this study are pathogenic and cause human infections, e.g., 1 case of catheter-related bloodstream infection caused by M. neoaurum, 1 case of pulmonary infection caused by M. celatum, and 2 cases of soft tissue infection caused by M. conceptionene and M. arupense (10–13). In addition, in this study M. mageritense and M. immunogenum were the causative agents for pulmonary infection in an adult and submandibular abscess in a child from Taiwan, respectively.

One study limitation was lack of a quantifiable denominator, which is critical for understanding the epidemiology of an illness. True population-based inferences about NTM epidemiology are usually impossible to conclude from a study of only hospital inpatients and outpatients. Although the hospital has a reference mycobacteriology laboratory and is a major referral center in Taiwan, how the study sample may have affected the results or the approximate size of its catchment of patients remains unknown. During the study period, an increasing percentage of patients (≈20% in 2008) was referred from other hospitals in different parts of Taiwan. However, because this study was conducted in a tertiary-care center in northern Taiwan, these findings might not reflect the overall situation in Taiwan.

As prevalence and incidence of NTM increases, clinicians in Taiwan should consider NTM as a possible cause of TB-like disease. Accurate species identification is imperative before proper treatment can be determined for diseases caused by the diversity of NTM species. Further studies of clinical isolates are also needed to understand the spectrum of disease caused by these rare pathogens.

This study was partially supported by Institute for Biotechnology and Medicine Industry (DOH97-DC-1501).