To the Editor: Hantaviruses are primarily rodent borne and can cause hemorrhagic fever with renal syndrome (HFRS) in persons who inhale aerosolized excreta from infected rodents. The clinical characteristics of HFRS are fever, hemorrhage, and varying degrees of renal and hepatic dysfunction. Although HFRS is endemic primarily to Eurasian regions, there is serologic evidence of hantavirus infections in rodents and humans worldwide (1). Little is known about the occurrence of hantavirus infection in rodents or humans in Vietnam. One study found 5.4% prevalence of antibodies against Hantaan 76–118 and Puumala strains among residents of the Hanoi Metropolitan (2), whereas another study in southern Vietnam did not find evidence of hantavirus infection in humans (3). We describe autochthonous HFRS from Vietnam, possible reservoir hosts, and the follow-up investigation, which implies the presence of a strain of Seoul virus (SEOV).

The case-patient was a previously healthy 25-year-old nurse working in a referral hospital and residing in a semiurban district of Ho Chi Minh City. On September 23, 2008, she was admitted to the referral hospital with a history of high fever, chills, myalgia, nausea, vomiting, hematuria, and abdominal and lower back pain for 3 days. Physical examination showed a body temperature of >39°C, petechiae, mild dehydration and hypotension, with otherwise unremarkable vital signs. Hematologic tests showed 13,300 leukocytes/mm3, 167,000 thrombocytes/mm3, and hematocrit of 31%. Urinalysis showed grave hematuria (3+), proteinuria (2+), and leukouria (2+).

Immunoglobulin (Ig) M and IgG against Hantaan recombinant nucleocapsid protein antigen were detected in the case-patient’s acute-phase and convalescent-phase serum samples, respectively, by ELISA (4,5). The presence of antihantavirus IgG was confirmed by immunofluorescent antibody (IFA) assay using whole hantavirus antigen and Western blot using hantavirus CL-1 strain (6,7). In further analysis, neutralization antibodies against SEOV strain SR-11 were detected by focus reduction neutralization test (8). The viral RNA, however, was not detectable in the acute-phase blood sample by reverse transcription–PCR (RT-PCR) (9). Other serologic tests were performed for dengue fever, typhoid fever, hepatitis B, and malaria; results of culture of blood and urine for bacteria were negative.

Following confirmation of the diagnosis, close contacts of the patient were investigated. Two family members of the patient did not have any symptoms compatible with HFRS; their serum samples were tested and found negative for antihantavirus IgG. Because the patient was a nurse, possible nosocomial transmission and sources were also investigated and excluded. On the basis of the patient’s strong history of exposure to rodents at home, further investigation focused on the domestic rodent population. 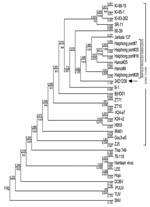 From October 14 through 16, 2008, 110 rodent traps were set within and surrounding the patient’s house. The total catch was 32 rodents, of which 16 were Rattus norvegicus, 7 R. exulans, 5 R. argentiventer, and 4 Bandicota indica. By using ELISA, IFA, and Western blot, antihantavirus IgG was detected in serum from 7 rats, of which 5 were R. norvegicus, 1 R. argentiventer, and 1 B. indica. Further analysis using RT-PCR identified 2 SEOV strains from R. norvegicus and R. argentiventer captured in the patient’s house. The M segment of 1 identified SEOV strain (24D1208) was sequenced and compared with 22 SEOV strains, 6 of which were from R. norvegicus rats captured in urban areas of North Vietnam. Phylogenetic analysis showed that this SEOV belonged to the Vietnamese SEOV genotype (Figure).

We describe a clinical case of hantavirus infection and its potential rodent reservoir occurring in Vietnam. The clinical manifestations of the case-patient were compatible with SEOV infection, which is responsible for a moderate form of HFRS (10). Also, HFRS caused by SEOV occurs in urban rather than rural areas, unlike other hantavirus infections. Our epidemiologic findings were compatible with other studies indicating the source of infection was the case-patient’s home, the only place where she had a history of exposure to rodents. Although viral RNA could not be obtained from the case-patient for genotyping, the genomic comparison of the viral strains from rodents captured in the case-patient’s home and elsewhere in Vietnam suggested that the source of infection was local rodents. This report provides additional evidence that hantavirus infection is a worldwide problem and is likely underdiagnosed in Vietnam and other countries where simple standardized laboratory diagnostics are not widely available.

This work was supported by a cooperative grant from the Pasteur Institute of Ho Chi Minh City, Vietnam, and the Hokkaido University Graduate School of Medicine, Sapporo, Japan.