The emergence and subsequent global spread of pandemic (H1N1) 2009 presents several challenges to health policy makers. Although some countries have substantial antiviral drug stockpiles available for treatment and chemoprophylaxis and vaccines became available toward the end of 2009, nonpharmaceutical interventions remain the primary resource available to most populations to mitigate the impact of pandemic (H1N1) 2009 (1). One such nonpharmaceutical intervention is school closure, either reactively following outbreaks or proactively at district or regional levels (2,3). A recent review has highlighted the lack of consensus over the potential benefits of school closures and the potential economic and social costs (4). Although the current pandemic (H1N1) 2009 virus is of moderate severity, data from 2009 provide an ideal opportunity to estimate the effectiveness of interventions against pandemic influenza.

In Hong Kong Special Administrative Region, People’s Republic of China, there was a considerable delay between the first reported imported case on May 1, 2009, and the first reported local case (i.e., not otherwise epidemiologically linked with outside travel, contact with an imported case-patient, or contact with an infected person who had contact with an imported case-patient) was laboratory-confirmed and reported to the government on June 10. During the initial stages of the epidemic, the local government operated under containment phase protocols, in which all confirmed cases were isolated in hospital and their contacts were traced, quarantined in hotels, hospitals, and holiday camps, and provided with antiviral drug prophylaxis. When the first nonimported case was confirmed, the government entered the mitigation phase and announced immediate closure of all primary schools, kindergartens, childcare centers and special schools, initially for 14 days. Closures were subsequently continued until the summer vacation began July 10. Secondary schools generally remained open, while those with >1 confirmed case were immediately closed for 14 days. Some containment-phase policies, including isolation of cases and prophylaxis of contacts, were maintained until June 27. During our study period, patients seeking treatment for suspected influenza at designated fever clinics and public hospital emergency departments were routinely tested, and pandemic (H1N1) 2009 virus infection was a reportable infectious disease. 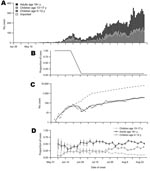 We analyzed epidemiologic data on laboratory-confirmed pandemic (H1N1) 2009 infections collected by the Hong Kong Hospital Authority and Centre for Health Protection (the e-flu database). The epidemic curve of laboratory-confirmed pandemic (H1N1) 2009 cases showed a biphasic pattern, with a small initial peak in reported cases at the end of June followed by a nadir at the beginning of July and rising incidence after that (Figure, panel A).

We specified an age-structured susceptible-infectious-recovered transmission model to explain the early pandemic (H1N1) 2009 dynamics in Hong Kong (Technical Appendix). We estimated change points in the proportion of symptomatic infections identified and age-specific rates of seeding of infectious cases from overseas. A simple 3-period model for changes in reporting rates provided a parsimonious fit to the data (Figure, panel B). Reporting rates were defined relative to the initial reporting rate. The comparison between the observed and estimated incidence is shown in the Figure, panel C.

We estimated that the relative rate of reporting declined to ≈5.2% of its initial value from June 29 onward (Table). Persons <19 years of age were estimated to be 2.6× more susceptible than the rest of the population. The estimated effective reproductive number was 1.7 before educational institutions for children <13 years of age were closed on June 11, 1.5 between June 11 and July 10 when summer vacation began, and 1.1 for the rest of the summer. The drop in reproductive number was driven by an estimated 70% reduction in intra–age-group transmission concurrent with school closures. The fitted model implies that ≈182,000 persons (2.5% of the population) had experienced illness associated with pandemic (H1N1) 2009 infection by August 27.

In Hong Kong, kindergartens and primary schools were closed when local transmission of pandemic influenza was identified. By using a parsimonious transmission model to interpret age-specific reporting data, we concluded that the subsequent closure of secondary schools for the summer vacation was associated with substantially lower transmission across age groups. We estimated that reporting of cases declined to 5.2% of its initial rate through the second half of June; this is plausible given the gradual change from containment phase to mitigation phase over that period.

It is challenging to infer the precise impact of school closures in Hong Kong, given that they were implemented immediately and sustained until summer vacation and so we have little data on local transmissibility in the absence of school closures. In previous pandemics attack rates have generally been highest in younger children (4,5), and this has been noted for pandemic (H1N1) 2009 in Mexico (6) and Chicago (7). This observation, in combination with our finding that children <12 years of age were relatively unaffected in Hong Kong during the school closure period (Figure, panel D), intuitively implies that closures were effective in preventing infections in this age group. Furthermore, assuming that children are responsible for up to half of all community transmission (8), it is likely that protection of younger children had substantial indirect benefits. Previous studies have suggested that sustained school closures during a pandemic could reduce peak attack rates and prevent 13%–17% of total cases in France (8) or <20% of total cases in the United Kingdom (3). Our finding that the reproductive number declined from 1.5 during the kindergarten and primary school closures to 1.1 during summer vacation suggests that a much more substantial drop in attack rates would result from sustained school closures.

By including a model of reporting, we have also been able to estimate case numbers. We estimated a cumulative illness attack rate of ≈182,000 cases (2.5% of the population) by August 27. Between June 29 and August 27, a total of 1,522/9,846 confirmed pandemic (H1N1) 2009 case-patients were hospitalized for medical reasons, among whom 13 died. These numbers are more consistent with a substantially lower case-fatality ratio than suggested by initial estimates of the severity of the pandemic (H1N1) 2009 strain (9,10). These estimates are dependent on the initial rate of reporting being close to 100%.

We assumed that transmission varied by age and time. If reporting rates varied in a way not accounted for by our model, this would affect the accuracy of our estimates of growth rate and cumulative attack rates. Although we attributed changes in transmissibility between June and August to school closures and summer vacations, it is possible that other secular changes or external factors such as seasonality also contributed. However, it is unlikely that seasonal factors would have reduced transmission of influenza at this time of year, on the basis of symptomatic and laboratory confirmed incidence of influenza from previous years (11). Reference data on age-specific population attack rates from serologic surveys or population-based surveillance systems would enable us to calibrate our estimates of reporting rates and growth rates and provide external validation of our model estimates.

Dr Wu is assistant professor at the University of Hong Kong School of Public Health. His research interests include using mathematical models to devise effective strategies for the control and mitigation of infectious diseases.

This research received financial support from the Research Fund for the Control of Infectious Disease, Food and Health Bureau, Government of the Hong Kong Special Administrative Region (grant no. HK-09-04-01); the Harvard Center for Communicable Disease Dynamics from the US National Institutes of Health Models of Infectious Disease Agent Study program (grant no. 1 U54 GM088558); the Area of Excellence Scheme of the Hong Kong University Grants Committee (grant no. AoE/M-12/06); from Fogarty International Center (grant no. 3R01TW008246-01S1); and the Research and Policy for Infectious Disease Dynamics program from Fogarty International Center and the Science & Technology Directorate, Department of Homeland Security.