Rickettsia rickettsii is the etiologic agent of Rocky Mountain spotted fever (RMSF). During the past 2 decades, a clear reemergence of RMSF has been seen in southeastern Brazil, where ≈350 laboratory-confirmed cases (case fatality rate ≈30%) have been reported (1). Most of these cases were confirmed solely by serologic-based techniques; specific identification of the Rickettsia species was not achieved. However, because these cases were clinically and epidemiologically compatible with RMSF, the agent was presumed to be R. rickettsii (1).

The occurrence of R. parkeri in Brazil has been restricted to ticks; human clinical infection has been reported in the United States, and possibly in Uruguay (1). Additionally, a few clinical cases caused by R. felis or R. typhi have been reported in southeastern Brazil during the 21st century (2,3). We report a clinical case of SFG rickettsiosis in a patient from southeastern Brazil. Molecular analysis of clinical samples showed that the patient was infected by a novel SFG strain.

Figure 1. Inoculation eschar on the lumbar region of the back of a patient infected with a Rickettsia sp. from the Atlantic rainforest in the state of São Paulo, southeastern Brazil.

On May 2, 2009, a 66-year-old man was bitten by a tick on his lumbar region while walking on his ranch within an Atlantic rainforest area. Although his primary residence was in the urban area of Santo André within the São Paulo Metropolitan region (where he reported never having been bitten by ticks), he often visited his ranch in Barra do Una, a village within the Peruíbe Municipality, southern coastal region of the state of São Paulo (where he reported having been bitten by ticks several times). The area is within a large Atlantic rainforest reserve and is <50 m above sea level. The patient reported no travel to additional locations during the previous 3 months. Ten days after the tick bite (May 12, 2009), the patient reported the first episode of fever (≈39°C) and took acetaminophen. On May 15, 2009, he visited a doctor, who prescribed oral cephalexin (500 mg, 6×/6 h). On the next day, a macular rash appeared on his arms and legs, associated with muscle and joint pain. Fever was still present (39.5°C). On May 19, 2009, the patient had continuing fever (39.5°C), a macular rash (without itch) on his arms and legs, arthralgia, and myalgia on lower regions of the arms and legs and hands. The patient had an eschar on the lumbar region (Figure 1), exactly where he had removed an attached tick on May 2, 2009. He admitted that the tick remained attached to his skin for at least 20 hours until being removed and discarded.

Based on suspicion of rickettsial disease, blood samples were collected the same day, and doxycycline (100 mg, 12×/12 h) was prescribed for 10 days. Three days later (May 22, 2009), the patient returned to the laboratory where a new blood sample was collected, and a skin biopsy of the eschar was aseptically performed. The patient had not had a fever since May 20, 2009 (1 day after initiation of doxycycline therapy), but still had macular rash and joint and muscle pain. A third blood sample was collected 13 days later (June 4, 2009), and no clinical abnormalities were found. 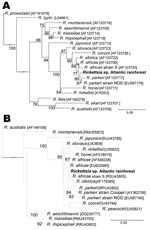 Figure 2. Molecular phylogenetic analysis of Rickettsia sp. strain Atlantic rainforest detected in a patient from the State of São Paulo, Brazil. A) A total of 740 unambiguously aligned nucleotide sites of the...

For each rickettsial gene, partial sequences were aligned with the corresponding sequences of other Rickettsia species available in GenBank, and rooted phylogenetic trees were built with PAUP 4.0b10 (8) by using the maximum likelihood method with an heuristic algorithm and the transition model + the Γ, transversion model + Γ, and the general time reversible + Γ + proportion invariant model for gltA, ompB, and ompA, respectively, as determined by Model Test (9). Tree stability was assessed by bootstrapping >1,000 replicates. In all trees, the sequence from the Brazilian patient, designated as Rickettsia sp. Atlantic rainforest, grouped in a cluster composed by different strains of R. africae, R. parkeri, and R. sibirica. This cluster was supported by high bootstrap value for ompB tree, but low for the ompA tree (Figure 2). Little divergence was observed between SFG species in the gltA tree; clusters were generally supported by low bootstrap values (data not shown). Partial sequences (gltA, ompB, ompA) from Rickettsia sp. strain Atlantic rainforest generated in this study were deposited into GenBank and assigned nucleotide accession nos. GQ855235–GQ855237, respectively.

We report a clinical case of SFG rickettsiosis acquired in an Atlantic rainforest area of the state of São Paulo, Brazil. Definitive diagnosis is supported by demonstrating a minimum 8× increase in titers between acute-phase and convalescent-phase serum samples, and by identification of rickettsiae in an acute-phase tissue sample (eschar), which was confirmed as a novel SFG strain and designated as Rickettsia sp. strain Atlantic rainforest. Genetic analyses indicated that this new strain was similar to R. africae, R. parkeri, and R. sibirica. The clinical profile of the Brazilian patient was similar to the disease caused by these 3 rickettsial species in the United States (R. parkeri) and in the Old World (continents of Asia, Europe, and Africa [R. africae or R. sibirica]), that is, mild fever, muscle and joint pain, eschar, rash, and no deaths (10–12). We did not observe regional lymphadenopathy, a clinical sign usually associated with R. parkeri, R. africae, and R. sibirica (10–12) infection, possibly because the inoculation eschar was on the lumbar region of the back.

It was recently proposed that a new Rickettsia species should not show >99.9%, 99.2%, and 98.8% similarity for the gltA, ompB, and ompA genes, respectively, with the most homologous validated species (13). The strain detected in the Brazilian patient showed similarity values equal to or greater than the above threshold values for >2 genes of either R. africae or R. parkeri or R. sibirica. Thus, we cannot identify the species for Rickettsia sp. strain Atlantic rainforest. Notably, it has been proposed that closely related species, such as R. parkeri and R. africae, should be considered strains of 1 species (12).

Ms Spolidorio is a doctoral student in the Faculty of Medicine of the University of São Paulo, Brazil. Her research interests focus on the epidemiology of tick-borne diseases.