We screened Salmonella and Escherichia coli isolates, collected 2004–2008 in the United Kingdom, for 16S rRNA methyltransferases. rmtC was identified in S. enterica serovar Virchow isolates from clinical samples and food. All isolates were clonally related and bore the rmtC gene on the bacterial chromosome. Surveillance for and research on these resistance determinants are essential.

Aminoglycosides are used in treating a wide range of infections caused by both gram-negative and gram-positive bacteria and have been classified by the World Health Organization as critically important antimicrobial drugs in human medicine (1). They inhibit bacterial protein synthesis by binding irreversibly to the bacterial 16S ribosomal subunit, which thereby leads to cell death. Resistance to these antimicrobial agents usually results from production of aminoglycoside-modifying enzymes (such as acetyltransferases, phosphorylases, and adenyltransferases), reduced intracellular antimicrobial drug accumulation, or mutation of ribosomal proteins or rRNA. An additional mechanism, methylation of the aminoacyl site of 16S rRNA, confers high-level resistance to clinically important aminoglycosides such as amikacin, tobramycin, and gentamicin. Six types of 16S rRNA methyltransferase genes conferring resistance to these antimicrobial agents, armA, rmtA, rmtB, rmtC, rmtD, and npmA, have been identified (2,3). armA and rmtB are spread in enterobacteria worldwide, and the presence of other methyltransferase genes have not previously been reported in Europe (3). With the exceptions of armA and rmtB in porcine Escherichia coli from Spain and the People’s Republic of China, respectively (4,5), all methyltransferase genes described have been identified in human clinical samples, for which a possible role for food in transmission of these determinants remains largely unknown. Despite large surveys performed to identify 16S rRNA methyltransferases, the rmtC gene has been detected in only 2 Proteus mirabilis clinical isolates from Japan and Australia in 2006 and 2008, respectively (3,6,7). In this study, 81,632 Salmonella and 10,700 Escherichia coli isolates obtained from the Health Protection Agency (HPA) Centre for Infections culture collection (isolated from January 2004 through December 2008) were screened for the presence of 16S rRNA methyltransferases.

Salmonella enterica (56 isolates) and Escherichia coli (24 isolates) were selected from the HPA collection based on their resistance to amikacin (breakpoint concentration routinely used in HPA Salmonella Reference Unit = 4 µg/mL). Because 16S rRNA methyltransferases confer high-level resistance to amikacin, 13 S. enterica isolates were selected on the basis of ability to grow on Isosensitest agar containing 500 µg/mL amikacin, whereas none of the E. coli isolates grew under these conditions. All isolates belonged to serotype Virchow. Further antimicrobial susceptibility testing by microdilution by using dehydrated Sensititer plates following the CLSI guidelines confirmed high-level resistance to 4,6-disubstituted 2-deoxystreptamines (Table 1). PCR screening of the 13 isolates for armA, rmtA, rmtB, rmtC, and rmtD (8) identified rmtC. Nucleotide sequencing of the amplicons confirmed an rmtC gene with 100% identity with those originally identified in Proteus mirabilis strain ARS68 isolated from an inpatient in Japan (6) and P. mirabilis strain JIE273 from Australia (7). To our knowledge, this is the third report of rmtC-bearing bacteria. Class one integrons were amplified (9), and sequenced. Isolates resistant to neomycin bore the aac(6′)-Ib gene cassette, whereas the dfrA1 gene was responsible for resistance to trimethoprim. 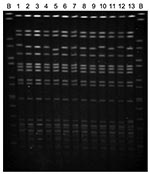 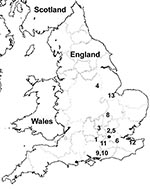 Twelve of the 13 S. enterica strains were originally isolated over a 4-year period from patients with clinical infection; 1 strain was obtained from frozen produce. Seven of 12 strains were obtained from patients with histories of foreign travel; 4 of the 7 patients had reported recent travel to India (Table 2). P. mirabilis strain JIE273 was also isolated from a patient who had recently returned from India (7). Investigations to ascertain the presence of rmtC genes in India are under way. To identify a possible link between the isolates, chromosomal DNA was embedded in agarose plugs prepared according to the pulsed-field gel electrophoresis (PFGE) protocol of PulseNet Europe (10). PFGE patterns showed only 1–2-band differences (Figure 1) and correlated with phage typing data (Table 1). All clinical isolates were recovered from feces, except a blood isolate recovered from a patient with invasive salmonellosis (Table 2). The temporal and geographic distribution of the isolates suggested independent acquisition of infections in most cases and possibly epidemiologically linked cases, e.g., strains 9 and 10 (Table 2; Figure 2).

PCR with primers ISEcp1R-F and rmtC-down (7) showed that the rmtC gene and immediate upstream sequences (GenBank accession nos. FJ984623–FJ984634 for human isolates and GQ131574 for the food isolate) were identical to those previously identified in P. mirabilis (6,7), in which ISEcp1 has been shown to play a role in the expression and transposition of the rmtC gene (11). However, the complete ISEcp1 element could not be amplified by using primers ISEcp1 5′ and ISEcp1 reverse, which suggests either partial deletion of this element or involvement of a different ISEcp1-like element in spread of rmtC in Salmonella (6,12). Attempts to isolate rmtC by conjugal transfer to rifampin-resistant E. coli 20R764 were unsuccessful, as was electroporation into E. coli LMG194 and ElectroMAX DH10B cells (both Invitrogen, Paisley, UK) by using plasmid preparations. An ≈100-kb rmtC-bearing plasmid was previously transferred from P. mirabilis ARS68 by electroporation but could not be mobilized by conjugation (6), and attempts to transfer the rmtC plasmid from P. mirabilis JIE273 by electroporation and conjugation failed (7). This finding contrasts with some qualities of the other methyltransferases, such as armA and rmtB, which are mostly located on conjugative plasmids (8,13).

The location of the rmtC gene was determined with PFGE by using I-CeuI nuclease treatment. Agarose plugs were digested with 9.5 U I-CeuI nuclease (New England Biolabs, Beverly, MA, USA). Separated DNA fragments were transferred onto a nylon membrane (GE Healthcare, Madrid, Spain) and hybridized with 16S rDNA and rmtC probes labeled with DIG-11-dUTP. Hybridization, labeling, and detection were performed according to the manufacturer’s recommendations (Roche Applied Science, Mannheim, Germany). A DNA band hybridized with both probes, showing that the rmtC gene was located on the chromosome. Results of hybridization of plasmid extractions (Plasmid Midi kit; QIAGEN, Inc., Chatworth, CA, USA) with the rmtC probe were negative (data not shown).

While this manuscript was under revision, an S. enterica ser. Virchow isolate bearing the rmtC gene isolated from a child with a history of travel to India was reported in the United States (14).

Dr Hopkins is a researcher in the Gastrointestinal, Emerging and Zoonotic Infections Department at the Health Protection Agency Centre for Infections (London, UK). Her research interests focus on mechanisms of antimicrobial resistance in enteric pathogens and development and application of DNA-based typing methods for epidemiologic investigations.

We thank Michel Doumith of the HPA Antimicrobial Resistance Monitoring and Reference Laboratory for technical advice and assistance with the electroporation experiments.

This study was supported by work package 29 of the Med-Vet-Net Network of Excellence (FOOD-CT-2004-506122). Strain requests should be addressed to the Health Protection Agency Centre for Infections (katie.hopkins@hpa.org.uk).