Plasmodium knowlesi is now established as the fifth Plasmodium species to cause malaria in humans. We describe a case of P. knowlesi infection acquired in Indonesian Borneo that was imported into Australia. Clinicians need to consider this diagnosis in a patient who has acquired malaria in forest areas of Southeast Asia.

Plasmodium knowlesi is now recognized as a cause of potentially fatal human malaria in forest areas of Southeast Asia. We describe a case of P. knowlesi malaria acquired in Indonesia and imported to Australia.

A 39-year-old man from Australia came to a suburban hospital in Sydney, New South Wales, Australia, with a 2-week history of morning fevers and mild headaches. His symptoms started 13 days after he left Indonesian Borneo (Kalimantan). The patient had spent an average of 10 days per month for the past 18 months working adjacent to a forest area in South Kalimantan Province, Indonesian Borneo. The most recent visit was toward the end of the rainy season. He did not use any personal vector avoidance measures (mosquito nets, long clothing, insect repellent) or receive malaria chemoprophylaxis. The patient did not travel to any other malaria-endemic areas during this 18-month period. 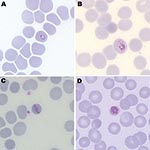 Figure. Giemsa-stained thin blood films of patient infected with Plasmodium knowlesi, showing a ring form (A), a trophozoite with Sinton and Mulligan stippling (B), a band form resembling P. malariae (C), and...

The patient was treated with atovaquone/proguanil, 250 mg/100 mg, 4×/day for 3 days. His fever resolved and the thrombocyte count returned to the reference level within 48 hours. He did not show any complications.

Naturally acquired human infection with P. knowlesi was first described in Malaysian Borneo in 1965 after an unusual sequence of events (3). Extensive investigation at this time failed to demonstrate zoonotic transmission of simian malaria to humans. More recently, molecular techniques have identified human infections with P. knowlesi, establishing it as the fifth Plasmodium species that infects humans (2). P. knowlesi accounts for most (70%) human malaria infections requiring hospitalization in Sarawak, Malaysian Borneo (4), and is widespread throughout Malaysia (5). Reports have also described human infections in Thailand (6), along the border of the People’s Republic of China and Myanmar (7), Singapore (8), and the Philippines (9). A recent epidemiologic study reported that 4/22 malaria cases diagnosed by microscopy as P. falciparum, P. vivax, or mixed P. falciparum/P. vivax infections were identified retrospectively by PCR to be mixed infections that included P. knowlesi (10). Presumably, P. knowlesi may account for a higher proportion of cases if those diagnosed morphologically as P. malariae were investigated.

Human malaria was considered to be caused by only 4 Plasmodium species in the premolecular biology era. Simian and human malaria parasites, including P. knowlesi and P. malariae, are often indistinguishable morphologically. Clues to identification of P. knowlesi by light microscopy that are useful, if present, include early trophozoites with fine ring forms, double chromatin dots, and 2–3 parasites per erythrocyte (resembling P. falciparum), trophozoites with a bird’s-eye appearance, mature trophozoites with a band appearance resembling P. malariae (Figure, panel C), and mature schizonts with a higher average merozoite count (16/erythrocyte) than in P. malariae (12/erythrocyte) (2,11).

Deaths and severe disease caused by P. knowlesi result from pulmonary and hepatorenal failure (5). Severity of P. knowlesi infection is related to potentially high parasitemia levels produced by its rapid and unique 24-hour erythrocytic cycle and its ability to infect all stages of erythrocytes (13). Sequestration is not thought to occur during P. knowlesi infection, and neurologic complications seen during P. falciparum infection have not been described. Although our patient was treated with atovaquone/proguanil, patients with similar uncomplicated cases have responded well to treatment with chloroquine (4).

Public health control is challenging in areas where zoonotic human malaria is endemic (14). Standard public health measures for malaria prevention (insecticide-treated nets, indoor residual spraying, and intermittent preventive treatment in the reservoir population) are likely to be less effective than for typical forms of human malaria. Nevertheless, travelers to malaria-endemic areas should be encouraged to practice mosquito bite protection measures and chemoprophylaxis.

P. knowlesi malaria is transmitted from long-tailed (Macaca fasicularis) and pig-tailed (M. nemestrina) macaques to humans by Anopheles latens mosquitoes (in the Kapit Division of Malaysian Borneo) when humans visit forest or forest fringe areas. However, transmission does not seem to occur readily in villages (2,15). Increased recognition of P. knowlesi indicates that human infection is possible by with other simian malaria parasites (P. cynomolgi and P. inui).

We report a patient with P. knowlesi infection that was acquired in Indonesia and imported to Australia. Fortunately, this patient had a low parasitemia level and mild disease. A high degree of clinical suspicion is likely to increase the number of P. knowlesi cases diagnosed in patients with malaria acquired in forest areas of Southeast Asia.