To clarify the potential for respiratory transmission of Saffold cardiovirus (SAFV) and characterize the pathogen, we analyzed respiratory specimens from 1,558 pediatric patients in Beijing. We detected SAFV in 7 (0.5%) patients and identified lineages 1–3. However, because 3 patients had co-infections, we could not definitively say SAFV caused disease.

Saffold cardiovirus (SAFV) is a new piconavirus, originally identified from fecal samples of a female infant with fever of unknown origin (1). SAFV has since been reported worldwide, and 8 lineages have been identified (1–6). Although serologic surveys have shown that SAFV-3 infection occurs early in life (7), the pathogenicity of SAFV is still unclear.

Because SAFVs are mainly detected in fecal samples, virus transmission is thought to occur by the fecal–oral route (1,3–7). However, 2 research groups also found SAFV-2 lineage in respiratory secretions (2,4). Thus, we investigated whether the respiratory tract route could be an additional transmission route and whether SAFV lineages other than SAFV-2 may also infect the respiratory tract. We identified and characterized 7 SAFV strains, which belonged to 3 distinct lineages, from respiratory samples of children with lower and upper respiratory tract infections (LRTIs and URTIs, respectively).

Virus nucleic acids in clinical samples were extracted by using the NucliSens easyMAG system (bioMérieux, Marcy-l’Etoile, France) according to the manufacturer’s instructions. SAFV RNA was detected by nested reverse transcription–PCR (RT-PCR) by using primers selective for the 5′ untranslated region (UTR) (3). The viral protein (VP) 1 gene was amplified by using 3 pairs of primers as previously described (3,5,6). The full genomic sequences were obtained by a genome walking method (7). The 5′ and 3′ UTR sequences were determined by using the RACE System (Invitrogen, Carlsbad, CA, USA) according to the manufacturer’s protocol. After being cloned into the pGEM-T Easy vector (Promega, Madison, WI, USA), all PCR products were verified by sequencing. In addition, all screened specimens were tested for known respiratory viruses as previously described (8,9). Mycoplasma pneumoniae was detected by using the gelatin particle agglutination test kit (SERODIA-MYCO II, Fujirebio, Japan).

For phylogenetic analysis, we constructed neighbor-joining trees based on the distances of SAFV nucleotide or amino acid sequences by using MEGA 4.0 (10). We used SimPlot (version 3.5.1) to analyze possible recombination between viral genome sequences (11).

LLC-MK2 cells were used to isolate SAFV as previously described (12). Cells were collected either when cytopathic effects were observed or after 12 days postinoculation, and then they were tested for SAFV by RT-PCR.

Co-infections with additional respiratory pathogens were detected for 3 of 7 SAFV-positive patients, all in the first cohort. These pathogens were respiratory syncytial virus (1 patient), enterovirus (1 patient), and M. pneumoniae (1 patient) (Table). A SAFV-3 strain was isolated from sample BCH1031. Starting at 5 days postinoculation, cytopathic effects were observed. Virus was not isolated from other SAFV-positive samples (data not shown).

We identified 3 genetic lineages, SAFV-1, -2 and -3, on the basis of phylogenetic analysis of VP1, the most diverse protein of picornaviruses (6) (Figure 1). Multiple-alignment analysis, based on reference sequences of each lineage available in GenBank, showed that the identity of the VP1 amino acid sequences among the strains in the same lineage was 92.6%–100% and among strains belonging to different lineages, 63.3%–100% (Appendix Table). We found no obvious differences in amino acid sequences, nor any new motifs in these sequences, between strains detected in respiratory samples and those in fecal samples within the same lineage. 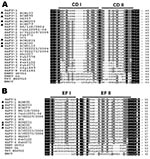 To further characterize the variation of SAFVs, we amplified the P1 region sequences of 6 strains identified in this study. The identity of all available nucleotide sequences of the P1 region among SAFVs was 68.5%–97.2%, whereas that of amino acid sequences was 74.9%–99.4%. The VP1 CD and VP2 EF loop structures, which display the greatest amino acid divergence among different SAFVs and are associated with tropism and virulence (6,7), were analyzed by amino acid alignment. Similar to previously reported findings (6,7), we found that the sequences in both loops among SAFVs were highly diverse among SAFVs (Figure 2). The amino acid identities among all known SAFVs were 53.1%–100% in CD loops and 40.3%–100% in EF loops; amino acid identities of SAFVs versus animal cardioviruses were 29.1%–41.1% in CD loops and 19.2%–32.6% in EF loops. We did not find any major differences among the available amino acid sequences of CD loops (91.1%–100.0%) or EF loops (97.9%–100.0%) of SAFVs within the same lineage for samples collected from either the gastrointestinal or respiratory tracts.

The complete genome sequence of BCH1031 (SAFV-3) was obtained, as were nearly complete genome sequences of BCHU115 (SAFV-3) and BCHU79 (SAFV-2), which covered full-length coding sequences as well as the 3′ UTR and a partial 5′ UTR (Figure 1). SimPlot analysis showed relatively high (>86%) identity between strains within the same lineage. No clear evidence of genetic recombination between the SAFV strains was found (Appendix Figure).

Although SAFV is known to be transmitted by the fecal–oral route (1,3–7), as are other picornaviruses (14), our detection of SAFV in respiratory samples suggests that various SAFV lineages may also be transmitted through the respiratory tract and may be associated with disease. However, other respiratory viruses and M. pneumoniae were co-detected in 3 of the 7 SAFV-positive patients. Given that we did not conduct assays for common respiratory bacteria (and the number of SAFV-positive cases was limited), whether SAFV actually caused the observed symptoms in the patients cannot be definitively determined.

Dr Ren works as a scientist at the Dr Christophe Mérieux Laboratory, Institute of Pathogen Biology, Chinese Academy of Medical Sciences–Fondation Mérieux and State Key Laboratory of Molecular Virology and Genetic Engineering. Her research is focused on the etiology of infection and pathogenesis of respiratory viruses.

We thank Yaowu Yang and Li Guo for their assistance with sequence analysis.

This study was supported in part by grants from the International Scientific and Technological Cooperative Project of Chinese Ministry of Science and Technology (S2010KR0788); Fondation Mérieux; and Institute of Pathogen Biology, Chinese Academy of Medical Sciences.