Spotted fever group (SFG) rickettsiosis is the most prevalent arthropod-borne infectious disease in Japan (1). Before publication of a 1984 report about Japanese spotted fever (JSF) caused by Rickettsia japonica, scrub typhus caused by Orientia tsutsugamushi had been known as the sole rickettsiosis in Japan (1). Although many SFG Rickettsia species (R. japonica, R. helvetica, R. tamurae, R. asiatica, and other related Rickettsia spp.) were known, only R. japonica had been isolated or detected by PCR from Japanese SFG rickettsiosis patients (1–3). R. japonica was found in Dermacentor taiwanensis, Haemaphysalis cornigera, H. flava, H. formonensis, H. hystricis, H. longicornis, and Ixodes ovatus ticks, and R. helvetica in H. japonica, I. columnae, I. monospinosus, I. ovatus, I. pavlovskyi, I. persulcatus, and I. turdus ticks (3,4). Cases of SFG rickettsiosis caused by R. heilongjiangensis, showing mild rash associated with fever and an eschar, have been reported in the Russian Far East and the People’s Republic of China (5–8). In Russia and China, R. heilongjiangensis was isolated from H. concinna and D. sylvarum ticks (6,7). Highly related Rickettsia spp. were detected from H. longicornis ticks by PCR in South Korea (9). In this study, we confirmed a human case of R. heilongjiangensis infection in Japan. We also isolated R. heilongjiangensis from H. concinna ticks, a probable transmission vector, in the suspected geographic area of infection.

A 35-year-old man had chills and malaise on July 29, 2008 (day 0). On day 3, the patient became febrile (39.3°C). On day 5, a physician recognized the rash and prescribed oral minocycline (200 mg/d). On day 6, the patient was hospitalized because of constant fever and a whole body rash of unknown cause. At that time, laboratory data showed leukocyte count 7.2 × 109 cells/L, thrombocyte count 275 × 109 cells/L, aspartate aminotransferase 129 U/L, alanine aminotransferase 98 IU/L, and C-reactive protein 3.5 mg/dL. Biopsies were performed on eschars 1 and 2 (5–8 mm diameter) with erythema (≈20 mm diameter), above the left scapula and on the right lower back. During hospitalization, the patient received minocycline, 200 mg/day, intravenously. DNA was extracted from skin biopsy specimens by using a commercial kit according to the manufacturer’s instructions (Gentra Puregene; QIAGEN, Valencia, CA, USA). PCR was performed by using primers of 3 rickettsial genes: outer membrane protein A (ompA; primers Rr190.70p and Rr190.602n) (10), citrate synthase (gltA; primers Cs2d and CsEndr) (6), genus Rickettsia–specific outer membrane (17-kDa antigen gene; primers R1 and R2) (11), and primers for O. tsutsugamushi, as reported previously (12). 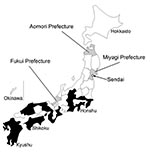 The case reported in this article occurred in an urban area of Sendai in the northern section of Honshu Island (Figure 2). Scrub typhus caused by O. tsutsugamushi occurs in this area with 2 seasonal peaks: from early spring to early summer, and from early fall to early winter (1). Serologic and microbiologic data ruled out scrub typhus in the present case. R. heilongjiangensis infection has been reported in the summer in the disease-endemic area of the Eurasian continent. Notably, the present case occurred in midsummer.

Dr Ando is chief of the Laboratory of Rickettsia and Chlamydia, Department of Virology I, National Institute of Infectious Diseases, Japan. His primary research interests are ecology and epidemiology of rickettsial and chlamydial diseases and the development of new diagnostic methods for vector-borne diseases.

We thank the staff of the Sendai City Municipal Government.

This study was supported by a grant for Research on Emerging and Reemerging Infectious Diseases (H18-Shinkou-Ippan-014 and H21-Shinkou-Ippan-06) from the Ministry of Health, Labor and Welfare, Japan.