Although ESBL production has mainly been shown in extraintestinal E. coli infections, studies concerning effects of ESBLs in intestinal E. coli infections are scarce. The worldwide spread of CTX-M-15 type ESBLs has led these β-lactamases to replace TEM- and SHV-type ESBLs in Europe, Canada, and Asia and become one of the major groups of ESBLs studied. Of the different CTX-M–type ESBLs, CTX-M-15 has become the most widely distributed enzyme worldwide. It was first identified in an isolate from India in 1999 and thereafter became prevalent around the world (4). CTX-M-15 enhances hydrolytic activity against ceftazidime (5). A particular clone of CTX-M-15–producing E. coli, characterized by phylogenetic type (phylotype) B2 and sequence type 131 (ST131), seems to be largely responsible for international epidemics of CTX-M–producing E. coli (6). Sequence types (STs) are grouped into clonal complexes by their similarity to a central allelic profile.

ST131 is a singleton and therefore does not belong to a clonal complex (7). Molecular epidemiologic studies have suggested that the sudden increase in CTX-M-15–producing E. coli worldwide was mainly caused by this single clone (ST131) and that foreign travel to high-risk areas, such as the Indian subcontinent, might play a partial role in the spread of this clone across continents (8). The blaCTX-M-15 gene is usually found downstream from the insertion sequence ISEcp1, which may be involved in the clone’s dissemination and expression (9). We describe molecular epidemiology and plasmid analyses of 5 CTX-M-15–producing EAEC isolates from patients with travelers’ diarrhea who had traveled from Spain to India.

The study included all patients with diarrhea who visited the Tropical Medicine Unit of Hospital Clinic in Barcelona, Spain, during 2005 and 2006. Patients with diarrhea that started during or shortly after (<5 days) a stay in a developing country were eligible. After the participants provided informed consent, clinical and epidemiologic data were collected.

Among all eligible participants, infection with EAEC and no other enteropathogen was found for 51. Of these 51 EAEC isolates, 5 from patients who had traveled to India were resistant to third-generation cephalosporins. Resistance phenotypes indicated ESBL production. MICs for antimicrobial agents and susceptibility class were determined by using the Clinical and Laboratory Standards Institute breakpoints guideline (Table 1). All strains were resistant to penicillins; second-, third-, and fourth-generation cephalosporins; and all β-lactamase–inhibitor combinations except piperacillin/tazobactam. Apart from β-lactam susceptibility, the strains showed resistance to other classes of antimicrobial agents, such as fluoroquinolones, tetracyclines, and monobactams (aztreonam). Positive amplification with specific primers and sequencing for the blaCTX-M-15 gene provided positive genotypic confirmatory test results for ESBL production.

The epidemiologic relationships among the 5 strains were studied by repetitive sequence–based PCR, pulsed-field gel electrophoresis, and multilocus sequence typing (10,11). The PCR and pulsed-field gel electrophoresis genomic fingerprinting showed that the 5 strains were not epidemiologically related (Figure 1). However, multilocus sequence typing identified 2 clonal complexes: ST38 (3 strains) and ST10 (1 strain). The fifth strain could not be classified into any clonal complex (Table 2).

A PCR method was used to detect genes encoding for typical EAEC virulence factors (2). These genes include aggA and aafA (encoding for adhesions); aap (for dispersin); aatA (for TolC); aggR (for regulation of aggregation); astA, set1A, and sen (for toxins), fyuA (for iron recruitment); agn43 (for antigen 43); and genes encoding for serine protease autotransporter toxins such as pet and sat. Gene aatA was detected in the 5 strains, whereas aap, aggR, and aggA had positive amplification for only 2 of the strains belonging to ST38. The other genes detected are shown in Table 2. EAEC was also identified by typical adherence to HEp-2 cells. 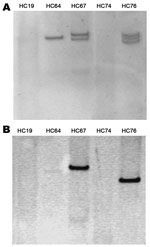 Figure 2. Plasmidic profile of the enteroaggregative Escherichia coli strains (A) and Southern blotting of the blaCTX-M-15 gene (B).

For plasmid extraction of the 5 isolates, we used the method of Kado and Liu (13). Only 3 strains had plasmids ranging from 93 kb to 170 kb (Figure 2, panel A). To confirm the absence of plasmids in the 2 strains, we conducted S1 digestion of the strains, resolving chromosomal DNA from plasmidic DNA. Southern blot of this digestion showed that the blaCTX-M-15 gene was chromosomally located in these 2 strains, as was the aatA gene (usually found in the plasmid contained in EAEC strains) (data not shown). Finally, the location of the blaCTX-M-15 gene in the 3 plasmid-containing strains was analyzed by using Southern blot from the plasmid extraction. The blaCTX-M-15 gene was located in a plasmid in the 3 strains. The size of the plasmid containing CTX-M-15 varied in each strain (Figure 2, panel B). Plasmids with specific known molecular weight were used to provide a range of the size of the plasmids studied.

We identified several features concerning the molecular epidemiology of CTX-M-15–producing EAEC isolates in India. First, all strains belonged to phylogenetic groups D and B2, the 2 groups most commonly found with E. coli infections (14). Second, not finding ST131 suggests that ST131 might not be the most common ST among EAEC strains from India and that clonal complex ST38 might play a large role in causing infectious intestinal diseases. Third, the blaCTX-M-15 gene is not only located in the plasmid but may also be in the chromosome. However, previous reports have shown that blaCTX-M-15 is consistently linked with ISEcp1, which means that the chromosomal location might have originated from a previous plasmid location that was part of either a transposon or a cassette within an integron (9). It is also worth noting that the size of the plasmids containing the blaCTX-M-15 gene was not the same in all strains, indicating that this gene may be located in different types of plasmids.

This evidence of widespread distribution and flexibility of the blaCTX-M-15 gene highlights the need to develop appropriate means to control dissemination of this gene and associated resistance genes. Epidemiologic surveillance and correct use of antimicrobial agents will help prevent the steady increase of antimicrobial drug resistance worldwide.

Ms Guiral is a PhD student with the Microbiologist Research Team at the August Pi i Sunyer Biomedical Research Institute in Barcelona. Her research interests include the genetic characterization of antimicrobial drug–resistant bacteria, especially all E. coli pathotypes.

We thank R. Rodicio and I. Montero for their help with the plasmid extraction method.