Use of Workplace Absenteeism Surveillance Data for Outbreak Detection 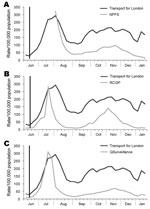 In London, United Kingdom, during the first wave of pandemic influenza A (H1N1) 2009, workplace absenteeism data from the Transport for London attendance/absence reporting system were compared with the historical baseline 3-year mean for comparative weeks of the year. The proportion of Transport for London employees absent because of self-reported or medically certified ILI, during June 28–October 17, 2010, generated surveillance alerts when compared with historical baseline data above the 95th and 99th percentile thresholds (SDs 1.96 and 2.58). For the same period, cause-specific workplace influenza absenteeism data were highly correlated with routinely published ILI surveillance, including the National Pandemic Flu Surveillance and sentinel General Practitioner systems (Figure) (2).

Use of Workplace Absenteeism Surveillance Data for Outbreak Detection