During 2007–2009, we tested serum samples from 2,004 pregnant women living in an area of high Q fever incidence in the Netherlands. Results confirmed that presence of antibodies against Coxiella burnetii is related to proximity to infected dairy goat farms. Pregnant women and patients with certain cardiovascular conditions should avoid these farms.

Dairy goat farms were implicated in the large Q fever epidemic (>3,500 human cases) in the Netherlands during 2007–2009 (1,2). However, most human infections remain asymptomatic or appear as a self-limiting febrile illness and are therefore not reported. Seroprevalence studies are needed to discover the true infection pressure in the population. We aimed to establish whether the presence of antibodies to Coxiella burnetii, the etiologic agent of Q fever, is associated with physical proximity to infected small ruminant (dairy sheep and goat) farms.

Serum samples from pregnant women were obtained from laboratories located in the high-incidence Q fever area in the province of Noord-Brabant. The samples had been collected during June 20, 2007–May 26, 2009, during a screening program for syphilis, hepatitis B, and HIV infection, which was routinely offered to all pregnant women. Serum samples were analyzed by using an immunofluorescence assay (Focus Diagnostics, Cypress, CA, USA) for detecting IgG and IgM against phases I and II of C. burnetii infection in a single dilution of 1:64. An IgG II titer >64 was considered indicative of past infection. Possible recent infection was defined as IgM II >64 combined with either an IgG II or IgM I titer >64. 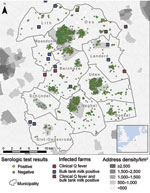 Figure 1. Location of the 10 municipalities studied in southern area of the Netherlands, 2007–2009, with residence and serologic results for 2,004 pregnant women, sites of small ruminant farms with infected animals, and...

Figure 2. Q fever notifications by month of onset of illness in 10 municipalities in southern area of the Netherlands, 2007–2009

For each pregnant woman, we calculated the distance from her home address to the closest farms in the following 3 categories: 1) dairy goat or dairy sheep farm where clinical Q fever (i.e., abortion waves) occurred during 2005–2009 (data from Animal Health Service) (8 farms [all goat farms] were identified in this way, of which 6 were located within or just outside of the study area) (Figure 1); 2) dairy goat or dairy sheep farms at which bulk tank milk tested positive for C. burnetii antibodies in the mandatory bulk tank milk monitoring program in 2009 (data from Food and Consumer Product Safety Authority; 12 goat farms were identified); and 3) a farm with >100 goats or sheep, irrespective of the infection status and production type (milk or meat) of the farm (data from the Ministry of Agriculture, Nature and Food Quality). Details of category 1 and category 2 farms are provided in Table A1.

Univariate regression analysis showed that pregnant women living <2 km from a farm that had experienced clinical Q fever had a higher risk of testing positive for antibodies to C. burnetii than those living >5 km away (odds ratio 2.63, 95% confidence interval 1.33–5.20 for IgG II titer >64 and odds ratio 6.58, 95% confidence interval 2.78–15.55 for possible recent infection). The increased risk for farms that had positive test results during monitoring of bulk tank milk was not significant. No increased risk was found for women who lived close to any farm with >100 animals. However, 98% of the population in the study area live within 5 km of such farms. In multivariate logistic regression analyses, taking into account address density of the neighborhood and other relevant variables, living <2 km from a farm with clinical Q fever remained a strong risk factor (Table 2).

The presence of antibodies against C. burnetii, especially levels suggesting recent infection, is associated with living near a farm with infected dairy goats. This finding applied only to farms where animals had clinical Q fever and not for farms where tests of bulk tank milk were positive. A study in 2008 showed that persons who lived near (<2 km) an infected dairy goat farm had a much higher risk for Q fever than did persons who lived further away (>5 km) (3). However, these results were based on notified cases, i.e., patients with clinical signs. Because the link to goat farming has received substantial attention in the public media, persons living close to goat farms may have sought medical care for suspected Q fever more rapidly than those who lived distantly from goat farms. Our population-based serologic study had a control group of seronegative women and identified asymptomatic infections. Combined, both studies provide evidence that living near dairy goat farms that experience abortion waves increases the risk in humans for symptomatic and asymptomatic C. burnetii infection.

A limitation of this study is that the exact infectious periods for each of the 20 farms in the study are unknown. Mandatory systematic monitoring of bulk tank milk only started in October 2009. However, for 17 of the 20 farms identified in the distance calculations in the present study, bulk tank milk testing results from 2008 were available from the records of the Animal Health Service. When an ELISA was performed, animals at 13 of the 17 farms tested positive for C. burnetii antibodies (Table A1). Furthermore, for 15 of the 17 farms, bulk tank milk tested positive by PCR in 2008. The assumption that persons became infected where they lived, although infection might have occurred elsewhere, might have weakened the association between house location and infected farms because of nondifferential misclassification. We did not account for circumstances that may play a role in transmission from farm to humans, such as wind, vegetation patterns, and soil conditions around infected farms (4). We assume that the effect of the voluntary vaccination program of small ruminants in 2008 had only limited effects on the study. Culling of pregnant animals on infected farms did not affect the results of the study because that began in December 2009.

Whether infection during pregnancy is associated with adverse pregnancy outcomes remains uncertain. The international literature suggests this conclusion, but an analysis based on 1,174 of the 2,004 women included in the present study showed no evidence of adverse pregnancy outcome among women with antibodies to C. burnetii (7–9). Despite uncertainties surrounding the clinical significance of asymptomatic seropositivity, this study supports the recommendation that pregnant women and persons at risk for chronic Q fever, such as patients with certain cardiovascular conditions, should avoid visiting infected farms.

Dr van der Hoek is a medical doctor and epidemiologist working at the Center for Infectious Disease Control of the Netherlands. His main research interest is in environmental determinants of respiratory, gastrointestinal, and zoonotic infectious diseases.

We thank Marianne van der Sande and Roel Coutinho for their comments on the manuscript.

This study was funded from a budget made available by the Ministry of Health, Welfare and Sport to the Center for Infectious Disease Control (project nos. V/210402 and S/210206).