These orbiviruses were frequently reported to have originated in sub-Saharan Africa (3,5–7). In many cases, outbreaks of orbivirus diseases in Algeria were followed by incursions of these viruses into southern Europe, most likely through passive wind-borne transmission of infected vectors (8,9). The aim of this study was to identify 3 particular orbiviruses (BTV, EHDV, and AHSV) in Algeria and determine their geographic distribution.

Algeria contains 19.6 million sheep, 3.8 million goats, 1.6 million cattle, ≈230,000 horses, and 290,000 camels. This country is divided into 48 provinces (wilayas). For reasons of animal health, transportation of animals is not allowed between southern and northern Algeria. Vaccination against bluetongue disease, EHD, and African horse sickness in Algeria is forbidden by law because vaccinated animals cannot be differentiated from naturally infected animals. 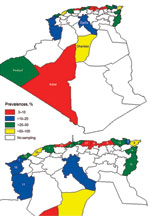 We detected an overall BTV seroprevalence of 24%. BTV seroprevalence differed among wilayas (Table; Figure) but was higher in northern wilayas and Ghardaia in central Algeria. In contrast with official 2008 data in which only 6 outbreaks were reported, our results indicated that BTV was widespread in 2008.

BTV seroprevalence differed between species (Table): 29% in cattle, 14% in sheep, and 21% in goats. In addition, a high seroprevalence (21%) was found in camels. In a recent study, BTV was isolated from the blood of 3 experimentally infected camels, which indicated that this animal might play a role in BTV transmission (11). Given that camels are frequently moved across desert areas in Algeria, they could potentially transport BTV over long distances, enabling viruses to cross the Sahara Desert.

Of ELISA-positive samples, 335 samples (250 from cattle, 51 from sheep, 15 from goats, and 19 from camels) obtained in 20 wilayas throughout Algeria were tested by BTV RT-PCR. BTV RNA, which indicates recent infection, was detected in 37 of samples (34 from cattle and 3 from sheep), most of which had been obtained in northeastern Algeria. The serotype identified was BTV-1.

Antibodies against EHDV were detected in 9% of the cattle tested. EHDV seroprevalence was detected in 15 of 21 wilayas sampled (Table), although EHD was not officially reported in 2008. This finding might be explained by often inconclusive clinical diagnoses and the factthat definitive diagnoses of this disease require specific laboratory tests (3). Given that only animals 6–12 months of age were sampled, seropositivity indicated circulation of EHDV over the previous year; the last reported outbreak in Algeria was in September 2006. In addition, the EHD epidemic in 2006 affected only central Algeria. However, our results indicate that EHD was widespread in 2008. EHDV seroprevalence seemed to be higher in central and southern Algeria (Table). None of 145 mules and 6 horses sampled in southwestern Algeria had antibodies against AHSV.

Our results indicated that BTV and EHDV were widespread in Algeria. Distribution of orbiviruses is determined by distribution of competent vectors, and entomologic surveys indicated that Culicoides imicola midges are abundant in northern and central Algeria (12), which is consistent with our results. Conversely, C. imicola midges were not present in southern desert regions, which would indicate that the livestock were infected elsewhere or that other Culicoides spp. might play a role in transmission. Moreover, although BTV seroprevalence was higher in northern and central wilayas, EHDV seroprevalence was higher in southern and central regions. This finding might be explained by the fact that different vector species can transmit EHDV and BTV (3). The temperature requirements for replication of these viruses and further transmission are also likely to differ (3). Furthermore, differences in distribution of these viruses might be influenced by exposure to viruses in previous years (13).

EHDV in northern Africa poses a major risk for the European Union because of likely wind-borne dispersal of infected vectors (3). In Europe, the presence of a known competent vector for EHDV (C. imicola), plus several suspected vectors (14), and the climatic conditions could be conducive to EHDV circulation (3). As reported in Israel in 2006, an EHDV epidemic can have a major economic effect through loss of milk production and increased animal deaths (15). If EHDV were introduced into the European Union, detection of infected animals would be hampered by a lack of diagnostic methods (3). EHD control would also be complicated by a lack of vaccines (3). In addition, the high prevalence of BTV in camels in Algeria and their potential role in BTV transmission warrants further investigation.

Dr Madani is head of the Virology Department at the Institut National de Médecine Vétérinaire in Algiers, Algeria. Her research interests are diagnosis and control of viral diseases.

We thank the veterinarians for helping collect samples and Peter Biggins for providing an English revision of the manuscript.

This study was supported by the MedReoNet Surveillance Network of Reoviruses, Bluetongue and African Horse Sickness, in the Mediterranean basin and Europe, Sixth Framework Programme.