To the Editor: Seasonal outbreaks of fatal acute encephalitis syndrome (AES) occur regularly in several parts of India. Japanese encephalitis virus (JEV) has been the major and consistent cause of these outbreaks in the Gorakhpur region of Uttar Pradesh State, accounting for ≈10%–15% of total AES cases annually (1–3). In India, vaccinations against Japanese encephalitis (JE) are administered in areas where the disease is hyperendemic, including Gorakhpur, and AES cases are regularly investigated to clarify the effects of vaccination. Currently, >2,000 patients with AES are admitted each year to Baba Raghav Das Medical College, Gorakhpur.

JEV is classified into 5 genotypes. Genotype III (GIII) is widely distributed in Asian countries, including Japan, South Korea, the People’s Republic of China, Taiwan, Vietnam, the Philippines, India, Nepal, and Sri Lanka (4). However, during the past decade, JEV GI has been introduced into South Korea, Thailand, and China and has replaced the GIII strains that had been circulating in Japan and Vietnam during the mid-1990s (5). Until 2007, all known JEV strains isolated in India belonged to GIII (2–4,6). 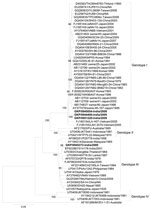 The first JE outbreak in the Gorakhpur region was documented during 1978. Since then, JE epidemics have occurred regularly (8). This study demonstrated simultaneous detection and isolation of GI and GIII JEV strains from AES case-patients. Documented clinical symptoms among patients infected with the 2 strains were indistinguishable.

GI JEV isolates from India share close genetic relationship with GI strains from Japan and Korea. In India, JEV neutralizing antibodies have been detected in 179 (34.8%) of 514 birds, including pond herons and cattle egrets, indicating a possible role in virus maintenance (9). Large perennial lakes, swamps, and rice fields provide a wintering and staging ground for several migratory waterfowl; such areas also favor breeding and survival of mosquitoes (10). Considering these conditions, GI JEV may have been introduced into India through migratory birds, as it has in other Asian countries (5). However, the exact mode of introduction of GI JEV into India is not known, and further studies are needed to determine the role of migratory birds in JE transmission.

This study suggests the recent introduction of JEV GI strain in India. Simultaneous detection of GI and GIII strains indicates their co-circulation and association with human infections in Gorakhpur region. Because the live attenuated JE vaccine used in India is derived from GIII strain SA14–14–2, the efficacy of the vaccine to protect against GI JEV must be carefully evaluated. Thus, the genetic and antigenic variation among JEV strains circulating in India should be monitored to determine effects on JE epidemiology and ongoing vaccination efforts. Additionally, the expansion of GI JEV into other parts of India should be continuously tracked.

We thank the Directorate of Health Services, Government of Uttar Pradesh, India, for support. We also are grateful to K. P. Kushwaha and A. K. Thacker for their efforts in clinical diagnosis and to V. Shankararaman, V. M. Ayachit, V. Sonawane, S. Mahamuni, V. Phokmare, and staff members from the National Institute of Virology Unit, Gorakhapur, for technical support.

This study was supported by the Indian Council of Medical Research, Ministry of Health and Family Welfare, Government of India.