We characterized 97 non-O157 Shiga toxin (stx)–producing Escherichia coli strains isolated from human patients during 2000–2009 from the national reference laboratory in Switzerland. These strains belonged to 40 O:H serotypes; 4 serotypes (O26:H11/H–, O103:H2, O121:H19, and O145:H28/H–) accounted for 46.4% of the strains. Nonbloody diarrhea was reported by 23.2% of the patients, bloody diarrhea by 56.8%. Hemolytic uremic syndrome developed in 40.0% of patients; serotype O26:H11/H– was most often associated with this syndrome. Forty-five (46.4%) strains carried stx2 genes only, 36 strains (37.1%) carried stx1, and 16 (16.5%) strains carried stx1 and stx2. Genes encoding enterohemolysin and intimin were detected in 75.3% and 70.1% of the strains, respectively. Resistance to >1 antimicrobial agent was present in 25 isolates. High genetic diversity within strains indicates that non-O157 stx–producing E. coli infections in Switzerland most often occurred as single cases.

Shiga toxin (stx)–producing Escherichia coli (STEC) is among the most common causes of food-borne diseases (1). This organism is responsible for several human gastrointestinal illnesses, including nonbloody or bloody diarrhea. Especially in children, these diseases may be affected by neurologic and renal complications, including hemolytic uremic syndrome (HUS). Most outbreaks and sporadic cases of bloody diarrhea and HUS have been attributed to strains of STEC serotype O157:H7. However, in Europe and recently in the United States, the role of non-O157 STEC strains (e.g., O26:H11/H–, O91:H21/H–, O103:H2, O111:H–, O113:H21, O121:H19, O128:H2/H–, and O145:H28/H–) as causes of HUS, bloody diarrhea, and other gastrointestinal illnesses is being increasingly recognized (1).

The common feature and main virulence factor of STEC is production of stx1 or stx2 proteins. Human virulent STEC strains often may also contain other virulence factors such as intimin (eae), a protein essential for the intimate attachment and the formation of attaching and effacing lesions on gastrointestinal epithelial cells, and E. coli hemolysin (ehxA) (2).

Little data are available for clinical non-O157 STEC infections in humans, including those in Switzerland, a country with a small but disproportionately high population of travelers. Therefore, we characterized all non-O157 STEC strains collected by the Swiss National Centre for Enteropathogenic Bacteria (Zurich, Switzerland) during 2000–2009, characterized these strains according to clinical and anamnestic data, and compared these results with data from other countries in Europe and the United States.

A total of 97 non-O157 STEC strains obtained from the Swiss National Centre for Enteropathogenic Bacteria were characterized. Strains were isolated during 2000–2009 from fecal samples of human patients with a reasonable clinical suspicion of infection with STEC. Samples sent to the Centre from hospitals or private practitioners are representative for Switzerland and the period screened.

STEC isolates were serotyped by using O (O1–O186)–specific and H (H1–H56)–specific rabbit antiserum produced at the Federal Institute for Risk Assessment (Berlin, Germany). Nonmotile strains were investigated with respect to their flagellar genotypes by using PCR and HhaI digestion of PCR products as described (3).

The 97 strains were isolated from 95 patients. Two STEC strains (968–03I and 968–03II; 2244–08I and 2244–08II) were isolated from 2 patients (online Appendix Table, www.cdc.gov/EID/content/17/2/180-appT.htm). During the period of screening, an increasing number of strains per year were registered. This increase could have been caused by the official reporting system for STEC, which was initiated in Switzerland in 1999; or by a country-wide reporting program for HUS, which was initiated in Switzerland in 2004 and may have increased physician awareness for HUS. 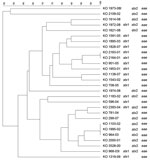 All non-O157 STEC strains were susceptible to 5 antimicrobial drugs (ceftazidime, ciprofloxacin, cefotaxime, cefepime, and cefoxitin). Results are summarized in the online Appendix Table. Among 97 strains, 13 (13.4%) were resistant to ampicillin, 3 (3.1%) to amoxicillin/clavulanic acid, 12 (12.4%) to cefalothin, 1 (1%) to cefpodoxime, 1 (1%) to cefuroxime, 2 (2.1%) to gentamicin, and 21 (21.6%) to tetracycline. The most frequent combination was resistance to ampicillin, cefalothin, and tetracycline, which was detected in 8 isolates, once each with additional resistance to amoxicillin/clavulanic acid or gentamicin. One strain, 1972–08, appeared to hyperexpress a broad-spectrum β-lactamase (resistance to ampicillin, amoxicillin/clavulanic acid, cefalothin, cefuroxime, and cefpodoxime).

Over the 10-year study period (2000–2009), HUS caused by infection with non-O157 STEC was detected in 38 (40%) of the 95 patients investigated. This frequency of HUS cases in our study was higher than that in other studies (10,11). In contrast to other studies, in which all diarrhea samples were screened for STEC, the set of non-O157 strains in our study was isolated from patients with a reasonable clinical suspicion of infection with STEC. This fact could be the reason for a higher proportion of HUS and bloody diarrhea cases in our study group. Fourteen (36.8%) HUS cases were caused by STEC O26:H11; the remaining cases were caused by other serotypes. Of the patients with HUS, 20 (52.6%) were female and 18 (47.4%) were male. Furthermore, 30 (78.9%) were <5 years of age and only 4 (10.5%) were >60 years of age.

Our finding that O26 isolates (28.9%) were the most common non-O157 STEC serogroup found in Switzerland is similar to findings reported from Belgium, Germany, Japan, Spain, and the United States (15–19). Similar to other countries (16), in Switzerland, STEC O26:H11/H– also caused several HUS cases.

Among the STEC O121:H19 group, all but 1 of the strains were motile, fermented sorbitol, and were stx2, eae, and ehxA positive; the 1 exception was ehxA negative. Four patients had bloody diarrhea and HUS developed in 2 patients. These findings confirm the results of Johnson et al. (11), which showed that strains of serogroup O26, O103, O121, and O145 are more likely to be associated with cases of HUS.

Although STEC O111 is one of the most common serogroups in countries such as Germany, Austria, and Australia and is often associated with HUS (11,22), we found only 2 O111:H– strains that had the H8 genotype. One of these strains had stx1, eae, ehxA, and the other strain had stx1, stx2, eae and ehxA. The patients from whom these 2 strains were isolated sought treatment for bloody diarrhea and HUS, respectively.

In Germany, STEC O91 (H14/H21) is currently the fourth most common STEC serogroup isolated (24). However, we have detected only 1 O91:H10, stx2-positive, eae- and ehxA-negative, sorbitol-fermenting strain in Switzerland during the past decade. This strain was isolated from a 60-year-old woman in whom HUS developed. STEC O91 isolates that express flagellar antigen H10 have been detected in different countries, albeit at low frequencies (25–27). O91 is usually eae negative and the most common serogroup isolated from adult patients (25). Another eae-negative serogroup is O117, which is often associated with travelers, mainly to Asia, Africa, and Cuba (28). We identified 3 (3.1%) O117:H7 strains that were stx1 positive and stx2, eae, and ehxA negative. This virulence pattern was identical to that for 20 STEC strains reported by Olesen et al. (28). One of our strains was associated with a patient who traveled to India, a country that has been reported as the origin of O117 infections (29). However, no information was available regarding travel for the other 2 patients in our study from whom the O117:H7 stx1-positive, stx2-, eae-, and ehxA-negative strains were isolated. Two of these patients had bloody diarrhea, but no clinical data were available for the third patient.

To detect genetic similarities and epidemiologic relationships among STEC strains, we performed PFGE on representatives of serogroups that occurred at high frequencies. O26 PFGE patterns were heterogeneous except for 2 strain sets, which had 2 and 3 strains without any obvious epidemiologic relationship to each other. Set 1 contained 2 stx1-positive, eae-positive strains isolated in 2001 (KO 2163–01 and KO 2164–01) from an 80-year-old woman and a 2-year-old-boy, respectively, each of whom had bloody diarrhea. Set 2 contained 3 stx2-positive, eae-positive strains isolated in 2002 and 2003 (KO 1103–02, KO 1995–02, and KO 964–03), from 3 female patients (1, 2, and 41 years of age), all of whom had HUS and bloody diarrhea. However, no information for risk factors, such as contact with animals, traveling, or eating animal derived-food, was available for these 5 patients.

PFGE patterns for O145 strains were also heterogeneous, except for 2 similar strains without any epidemiologic relationships to each other that were isolated in 2008 (K 145:25–1550–08 and K 145:25–2208–08; both stx2 and eae positive, 1 from a 2-year-old girl who was treated for HUS, and 1 from a 1-year-old boy who had bloody diarrhea). However, no information for risk factors, such as contact with animals, traveling, or eating animal-derived food, was available for these 2 patients. PFGE patterns of O103 and O121 strains were the most heterogeneous; none of the strains had the same patterns.

The presence of the eae gene has been reported to have some predictive value for STEC seropathotypes that are associated with epidemic disease and consequently associated with severe disease such as bloody diarrhea and HUS (12,30,31). Therefore, we performed statistical analysis with multinomial regression and binary logistic regression for our data.

Strains associated with HUS, compared to those associated with bloody diarrhea, were more likely to harbor stx2 and eae, but the presence of only 1 of these virulence factors was not significantly associated. In our study, of 29 patients who provided eae-negative isolates, 17 had bloody diarrhea, 4 had bloody diarrhea and HUS, 4 had HUS, 1 had nonbloody diarrhea, and 3 had no clinical data available. Strains from the 8 patients with HUS comprised a variety of serogroups (O20, O82, O91, O148, O153, O181, and ONT); only 5 had the stx2 gene. In our study, 21.1% of isolates from HUS patients were eae negative. The 3 eae-negative, stx2-negative strains had only stx1 or stx1 and ehxA. Strains with such a pattern of virulence factors are notable because they are less likely to cause HUS than strains harboring stx2. However, these findings are consistent with epidemiologic data from other countries (19,27), which indicate that certain eae-negative STEC strains cause hemorrhagic diseases in humans. A report from the United States (Minnesota) indicated that non-O157 isolates that had only stx1 can cause severe illness (bloody diarrhea or HUS) (32).

Resistance to >1 of the 12 antimicrobial drugs tested was identified in 25 (25.8%) non-O157 STEC strains. This finding is consistent with results for a study in Spain, in which 238 (41%) of 581 non-O157 STEC strains were resistant to >1 of 26 antimicrobial drugs (33). In our study, 13 (13.4%) of 97 strains were resistant to ampicillin, 3 (3.1%) to amoxicillin/clavulanic acid, 12 (12.4%) to cefalothin, 1 (1%) to cefpodoxine, 1 (1%) to cefuroxime, 2 (2.1%) to gentamicin, and 21 (21.6%) to tetracycline. In STEC strains, the most frequent drug-resistance combination was resistance to ampicillin, cefalothin, and tetracycline, which was detected in 8 isolates, once with resistance to amoxicillin/clavulanic acid and once with resistance to gentamicin. Comparably, Schroeder et al. (34) tested 137 non-O157 E. coli human isolates (including 37 STEC strains) from the United States, Saudi Arabia, Argentina, Canada, Mexico, Zambia, and Singapore and reported STEC drug-resistance frequencies of 14% for ampicillin, 5% for amoxicillin/clavulanic acid, 11% for cefalothin, and 32% for tetracycline.

In conclusion, high genetic diversity within strains indicates that non-O157 Shiga toxin–producing E. coli infections in Switzerland most often occurred as single cases. Because little data are available for clinical non-O157 STEC infections in humans, our results may provide useful information for analysis of these strains.

Ms Käppeli is a doctoral candidate at the Institute for Food Safety and Hygiene, Vetsuisse Faculty, University of Zurich. Her main research interest is characteristics of non-O157 Shiga toxin–producing E. coli.

We thank the Federal Office of Public Health for support in obtaining anamnestic data, Grethe Sägesser for help with strain collection and technical support, and Paul Torgerson for statistical advice.