Mycobacterium caprae is a pathogen that can infect animals and humans. To better understand the epidemiology of M. caprae, we spoligotyped 791 animal isolates. Results suggest infection is widespread in Spain, affecting 6 domestic and wild animal species. The epidemiology is driven by infections in caprids, although the organism has emerged in cattle.

Mycobacterium caprae is a cluster within the M. tuberculosis complex (Technical Appendix). This pathogen has been recognized mainly in central Europe, where it has been occasionally isolated from tuberculous lesions from cattle (1–5), pigs (4), red deer (Cervus elaphus) (4,5), and wild boars (Sus scrofa) (3). Its isolation from humans has also been described (3,6); often, a contact with livestock has been suggested as a likely means of transmission (5). To our knowledge, this pathogen has never been isolated outside continental Europe, except from a European patient in Australia (7) and a cow in Algeria (8).

The combination of disease tracing and molecular typing is needed to understand the epidemiology of tuberculosis. This report describes the molecular epidemiology of M. caprae infection in Spain compared with other countries. We characterized M. caprae isolates from goats and other domestic and wild animals by spoligotyping (9). The relative contribution of each animal and its role in animal tuberculosis are discussed. 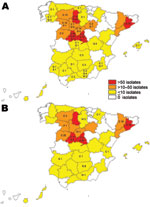 Further authentication was achieved by detection of RD4 in the isolates with a 3-primer PCR in a panel of 63 unrelated isolates that included all spoligotyping patterns and animal species. Of the selected isolates, 62 showed the 545-bp product, indicating that they harbor RD4. One isolate from a cow of Eastern European origin repeatedly showed a 340-bp band, and its sequencing could not confirm presence or absence of RD4. For detection of specific M. caprae gene polymorphisms, 1 isolate from every spoligotyping pattern was studied. Additional identification was determined by sequencing of the pyrazinamidase A gene, which demonstrated a C at nt 169 that results in the functional wild-type pyrazinamidase A gene, and of the gyrase B gene that showed the G at nt 1311 and a C at position 1410 (Technical Appendix).

The isolates, which originated from 195 single cases or outbreaks (Table 1), clustered into 15 patterns, which share the features previously described for the species (absence of spacers 1, 3–16, 28, and 39–43). Notably, the Iberian spoligotype cluster lacks spacers 30–33, whereas most M. caprae isolates from central Europe belong to spoligotypes that harbor these spacers. The 3 isolates of profiles SB0418 and SB1619 that presented spacers 30–33 originated from cattle imported from southeastern Europe. The 2 predominant spoligotypes, SB0157 and SB0416, were found to be responsible for 60% and 22%, respectively, of the cases and infected different animal species in distant areas, whereas 7 patterns were unique to a single case or outbreak. We calculated the index of discrimination (D) described by Hunter and Gaston (10) using the website of the University of the Basque Country (www.insilico.ehu.es). The result, D = 0.584, is notably lower compared with a parallel research of 252 patterns from 6,215 M. bovis isolates (D = 0.87) (11).

Additionally, variable number tandem repeat typing by using loci ETR-A, ETR-B, ETR-D, QUB11a, QUB11b, QUB3232, ETR-E, and MIRU26 ( Technical Appendix) was performed as described by Frothingham and Meeker-O’Connell (12) on a selection of 20 isolates (Table 2). The isolates originated from 10 properties (6 goat herds and 4 cattle farms), each with 2 different spoligotypes detected at a time. At 5 farms, the loss of spacers 25–27, 29, and 34–38, which can be explained by a single deletion event, had caused a change of the spoligotype pattern. This loss changed SB0157 to SB1081 and SB1084 to SB1889, while the variable number tandem repeat profiles within the same farm remained identical.

The routine application of molecular diagnosis and typing techniques in clinical laboratories has enabled its real role as a pathogen for several species to be recognized. In Spain, M. caprae represents 7.4% of all M. tuberculosis complex isolates from domestic and wild animals. Seventy-five of the 197 outbreaks (38.1%) involved goats (Table 1). This species showed the highest diversity among M. caprae with 12 patterns identified, 6 of them exclusive to caprine herds. The association of M. caprae with goats in Spain may be due to 2 reasons. First, the microorganism seems to be highly pathogenic for the goats in Spain, based on the disseminated tuberculous lesions that it produces and its fast transmission within a herd. Second, caprine herds have not been included in the national eradication campaign (except when coexisting with cattle or as part of some regional programs). Therefore, M. caprae infection can spread easily through animal movements, such as purchase for replacement or genetic improvement.

The emergence of this pathogen in cattle has been observed. Cattle were involved in 106 outbreaks (53.3%) during the study period. Since 2004, cattle from 2,218 herds identified in the eradication program have been inspected by bacteriology. The number of cattle properties infected with M. caprae represented 0.85%–6.67% of the total number of herds diagnosed with bovine tuberculosis. Temporal trend of M. caprae isolates cultured over time was assessed by using the software WINPEPI 9.4 (13). The proportion of M. caprae isolated from bovine samples has increased consistently during 2004–2009, showing a significant positive trend (p = 0.009, by Mantel trend test) (Figure 2). We observed more M. caprae infections in cattle in regions with a high goat density. However, an analysis of the type of farm production shows that 86.7% of M. caprae–infected cattle have been raised in farms without any contact with small ruminants. This fact indicates recirculation of the pathogen within and between cattle herds. In countries that are virtually free of animal tuberculosis such as Germany, Austria, and the Czech Republic, a large number of cases in cattle and red deer are caused by M. caprae.

Identification of isolates from human patients has shown M. caprae as a human pathogen (3,6,14). A recent study suggests that M. caprae causes 0.3% of the cases of human tuberculosis in Spain, with SB0157 also being the most dominant spoligotype (14). The role of the pathogen as a public health risk is highlighted by lesions that can also be found in the mammary glands of infected goats; thus, consumption of unpasteurized dairy products remains a concern (15).

Compelling evidence indicates that M. caprae poses a serious health risk not only for goats, but also for other domestic and wild animal species and humans. Our results indicate that M. caprae infection is widespread in Spain and that the epidemiology is driven by caprine infections. Considering the role of M. caprae in animal tuberculosis, relevant legislation should be considered to address the infection as was done for M. bovis.

Ms Rodríguez is a PhD candidate in the Departamento de Sandidad Animal, Facultad de Veterinaria, Universidad Complutense de Madrid and received predoctoral research fellowship AP2006-01630 from the Spanish Ministry of Education. Her research focuses on molecular characterization of M. tuberculosis complex isolates and its application in epidemiology of these pathogens.

This research was supported by European Union project TB-STEP (KBBE-2007-1-3-04, no. 212414), the Ministry of Environment and Rural and Marine Affairs, the Comunidad de Madrid, and the Junta de Castilla y León.

1A list of members of The Spanish Network on Surveillance and Monitoring of Animal Tuberculosis can be found in the Technical Appendix (www.cdc.gov/EID/content/17/3/532-Techapp.pdf).