In conjunction with efforts to assess pathogen exposure in feral pigs from the southeastern United States, we amplified Bartonella henselae, B. koehlerae, and B. vinsonii subsp. berkhoffii from blood samples. Feral pigs may represent a zoonotic risk for hunters or butchers and pose a potential threat to domesticated livestock.

Bartonella spp. are intravascular, gram-negative bacteria that infect a diverse array of wild and domestic animals. These bacteria appear to induce a wide range of symptoms in humans and can cause similar disease manifestations in animals (1,2). An increasing number of Bartonella spp. are regarded as zoonotic pathogens, which creates a public health concern for human and veterinary medicine (3).

Feral pigs (Sus scrofa), nonnative, ancestral species derived from domesticated pigs in Europe, inhabit 39 states. As their geographic distribution expands and their numbers increase, these animals are causing substantial economic and ecologic damage, which has required implementation of specific damage management programs (4). Hunters and butchers coming in contact with blood from feral pigs may be at risk for infection with Bartonella spp (3). We report the molecular detection of 3 zoonotic Bartonella spp. in feral pigs harvested by hunters in Johnston County, North Carolina, USA.

During 2007–2009, a total of 135 EDTA-anticoagulated whole blood samples were obtained from 76 hunter-harvested juvenile and adult feral pigs (39 males). Blood samples were aspirated postmortem from the carotid artery, heart, or orbital venous sinus, resulting in >1 blood sample for 57 feral pigs. Specimens were stored frozen at –20°C until analysis.

For this study, a newly designed forward ITS primer (Bkoehl-1s (5′-CTT CTA AAA TAT CGC TTC TAA AAA TTG GCA TGC-3′) was used in conjunction with the 1100as reverse primer. Amplification was performed in a 25-µL final volume reaction containing 12.5 µL of Tak-Ex Premix (Fisher Scientific, Pittsburgh, PA, USA), 0.1 µL of 100 µmol/L of each forward and reverse primer (IDT DNA Technology, Coralville, IA, USA), 7.3 µL of molecular grade water, and 5 µL of DNA from each sample tested. Blood from a healthy dog was routinely used during DNA extraction and as a PCR negative (5 µL of extracted DNA) control. For positive controls, 5 µL of 0.001 pg/µL of B. henselae DNA (equivalent to 2.5 genome copies) was prepared by serial dilution in specific pathogen-free dog blood (7). No positive control was used for the B. koehlerae PCR. Conventional PCR was performed in an Eppendorf Mastercycler EPgradient (Eppendorf, Hamburg, Germany) under the following conditions: 1 denaturing cycle at 95°C for 2 min followed by 55 cycles at 94°C for 15 s, 68°C (Bartonella genus PCR) or 64°C (B. koehlerae PCR) for 15 s, and 72°C for 18 s. PCR was completed by an additional final cycle at 72°C for 30 sec. Products were analyzed by 2% agarose gel electrophoresis and detection by using ethidium bromide under UV light and sequenced either after purification of amplicons directly from the gel or from plasmid-clone minipreps by using QIAquick PCR purification kit or QIAGEN Miniprep Kit (QIAGEN), respectively, as described (6,7). 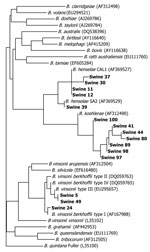 We amplified and sequenced B. henselae, B. koehlerae, and B. vinsonii subsp. berkhoffii DNA using >1 primer sets from 19.7% of hunter-harvested feral pigs. The domestic cat is the primary reservoir for B. henselae and B. koehlerae, and fleas are the primary vector (1). Managers of the study site reported the presence of feral cats, but cat numbers and interactions with feral pigs were unknown. Although feral pigs in the southeastern United States are hosts for ticks that are potential Bartonella vectors (9,10), the pigs in this study were harvested during the winter so no ectoparasites were found.

Mesorhizobium, an environmental microbe, most likely introduced during sample collection under field conditions, also was amplified by using 3 primer sets. Although unlikely, ectoparasite feces or dirt containing Bartonella spp. could have been similarly introduced during venipuncture. For future studies in which molecular testing is anticipated, blood should be collected aseptically.

The 3 Bartonella spp. found in feral pigs, B. henselae, B. vinsonii subsp. berkhoffii, and B. koehlerae, are known zoonotic pathogens (3,11,12). Transmission of B. alsatica, which infects wild rabbits in Europe, has been reported in humans with endocarditis and lymphadenitis in association with butchering wild rabbits (13). Because hunters and butchers are exposed to large quantities of pig blood, potential exists for Bartonella spp. transmission through inadvertent cuts or scratches, which has occurred with other zoonotic pig pathogens, such as Brucella suis (14).

Another potential implication of these results involves the transmission of Bartonella spp. from feral to domesticated pigs (15). Ctenocephalides felis and C. canis fleas, known vectors of B. koehlerae and B. henselae, have been reported to infest young pigs (10,12). Measures to control ectoparasites are commonly used by large commercial pig operations, where transmission of Bartonella spp. is not likely to pose a production or zoonotic risk.

We thank Pedro Diniz, Mrudula Varanat, Barbara Hegarty, and the staff at Howell Woods Environmental Learning Center for assistance during this project.

Funding for A.W.B. was provided by the Merck-Merial Veterinary Scholars Program. This research was supported in part through a grant from the American College of Veterinary Internal Medicine Foundation and by the State of North Carolina. N.A.C. is the Novartis Fellow in Vector-borne Infectious Disease Research. Funding for field work was provided by the Fisheries and Wildlife Sciences Program at North Carolina State University, Howell Woods Environmental Learning Center, and Johnston Community College.