Only indirect or circumstantial evidence has been published to support transmission of Rickettsia rickettsii by Amblyomma americanum (lone star) ticks in North America. This study provides molecular evidence that A. americanum ticks can function, although most likely infrequently, as vectors of Rocky Mountain spotted fever for humans.

Historically, transmission of Rickettsia rickettsii has been attributed to Dermacentor variabilis ticks in the eastern United States and to D. andersoni ticks in the western United States (1). Recently, researchers at the Centers for Disease Control and Prevention (CDC; Atlanta, GA, USA) documented transmission of R. rickettsii to persons residing in Arizona by a novel tick vector for North America, Rhipicephalus sanguineus (commonly referred to as the brown dog tick or kennel tick) (2,3). As reviewed by Goddard and Varela-Stokes in 2009, only scant evidence has been published to support transmission of R. rickettsii by Amblyomma americanum (lone star) ticks in North America (4), although Parker et al. in 1933 reported experimental transmission of rickettsial infection by lone star ticks (1), and other Amblyomma species, such as A. imitator and A. cajennense, are likely vectors for Rocky Mountain spotted fever (RMSF) in Central and South America (5).

A 61-year-old man visited his physician in May 2010 and reported a history of fevers, myalgias, and headache. He had been free of symptoms until 3 days earlier, when he experienced nausea and dizziness. The following morning, he had chills and, later the same day, a fever of 38.4°C. Mild headache and myalgias accompanied his fever. His symptoms became progressively more severe during the next 2 days, and fever reached 39.4°C. 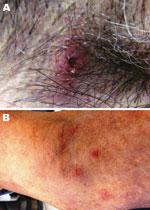 Figure. Images of lesion in the patient caused by bite from lone star tick. A) Erythematous circular lesion in right armpit at site of tick bite with induration and a necrotic center....

The patient resided on a farm in central North Carolina and had occasional exposure to ticks. Seven days before the onset of illness, he had removed an embedded tick from his right axilla. He estimated that the tick had been attached for 2–3 days. Clinical examination showed an eschar-like lesion at the site of the tick bite that appeared erythematous with a necrotic center (Figure). The patient’s neutrophil count (2,553 cells/µL) was within low reference limits, accompanied by 5% band neutrophils, and mild thrombocytopenia (148,000 platelets/µL).

A tick-borne rickettsiosis or ehrlichiosis was suspected, and on the 4th day of illness, the patient was prescribed doxycycline, 100 mg 2×/d for 7 days. A maculopapular rash appeared the next morning, which predominantly involved the extremities but not the palms or soles. Fever resolved within 36 hours after beginning therapy, and the rash began to fade. Within 1 week after receiving doxycycline, the patient’s symptoms and hematologic abnormalities had resolved (neutrophil count 4,378 cells/µL, no band neutrophils, and platelet count of 320,000/µL).

The patient provided the tick, which he had preserved in alcohol. The tick was identified by using Herms’s taxonomic key to Ixodes spp. ticks as a male lone star tick (A. americanum). Amplification of the mitochondrial 16S rRNA gene confirmed the tick species as A. americanum (417/418 bp, 99.8% homology with GenBank sequence L34313) (6).

According to CDC criteria, RMSF developed in this patient after he was bitten by an A. americanum tick. Evidence to support a diagnosis of RMSF included 1) amplification of R. rickettsii DNA from the patient’s blood sample at the onset of illness; 2) development of a prototypical rickettsial illness, including fever, rash, and thrombocytopenia 8 days after the tick was removed; 3) amplification of R. rickettsii from the alcohol-stored tick removed by the patient; 4) documentation of seroconversion to R. rickettsii antigens; and 5) a rapid and appropriate clinical response after treatment with doxycycline. The patient was not aware of any other recently attached ticks. Therefore, infection by an A. americanum tick caused by preexisting rickettsemia in the patient seems unlikely.

On the basis of historical (4) and recent PCR data, transmission of R. rickettsii by A. americanum ticks is most likely an infrequent event in North America (9). However, in Central and South America, A. cajennense and A. imitator are suspected vectors of R. rickettsii (5). For clinical and surveillance purposes, it is essential to recognize that at least 3 tick genera, Dermacentor, Rhipicephalus, and Amblyomma, may be capable of transmitting RMSF in the eastern and south-central United States.

During the past decade, CDC has reported a progressive rise in cases of RMSF, particularly in the eastern United States (www.cdc.gov/ticks/diseases/rocky_mountain_spotted_fever/statistics.html). During the same period, there has been a concurrent expansion in the geographic range of A. americanum ticks in conjunction with reports suggesting an increased frequency of attachment of this tick species to animals and humans (10,11). Although R. ambylommii is frequently amplified from A. americanum ticks, no current evidence supports a pathogenic role for this Rickettsia sp. in animals or humans (11). In contrast, A. americanum ticks can transmit R. parkeri, which is a recently documented human pathogen, most often transmitted by the Gulf Coast tick (A. maculatum) (12,13). Eschars have occurred frequently in the limited number of R. parkeri cases published, whereas eschars, such as the one seen in this case, are uncommonly described in association with RMSF (14). Using the 180-bp ompA gene variable region we sequenced in this study, we differentiated R. rickettsii from R. parkeri and R. ambylommii by 9 and 21 bp, respectively. Substantial efforts to amplify R. parkeri by using multiple primer sets (data not shown) from the tick and the patient’s blood were not successful.

Taken in the context of other recent studies, this report supports the hypothesis that lone star ticks can transmit R. ambylommii, R. parkeri, and R. rickettsii infections to persons in the United States (12,13,15). An increasing diversity of competent tick vectors in conjunction with recent identification of novel Rickettsia spp. may be contributing to the increase in seroepidemiologic surveillance trends reported for RMSF. Because extensive serologic cross-reactivity exists among rickettsial species, defining the infecting species requires organism isolation in a biosafety level III laboratory or PCR amplification and DNA sequencing, as was used in this study.