To the Editor: Dengue is a mosquito-transmitted viral disease endemic to the tropics and subtropics worldwide. It is caused by 4 dengue virus serotypes (DENV-1–4) that belong to the genus Flavivirus. The disease varies from dengue fever to life-threatening hemorrhagic fever and shock that are associated with secondary infections. During recent decades, dengue incidence and prevalence have increased in disease-endemic areas, and the disease has been increasingly recognized in travelers (1). We report a case of dengue in a man who had traveled to Yemen.

In June 2010, a 38-year-old Italian man was admitted to the hospital for high fever (maximum 39.5°C) after a 1-week work-related stay in Yemen, near Mukalla, in the province of Hadhramaut. The patient had visited the countryside where he was heavily bitten by mosquitoes.

Virus isolation was conducted as described (3). Viral RNA was extracted from the supernatant of the infected Vero E6 cells, and the envelope gene was amplified in an RT-PCR. The amplified product was directly sequenced (details available from P.R. upon request). The obtained envelope gene sequence (GenBank accession no. HQ336219) of 1,479 bp was aligned with 26 other DENV-3 strains, including the most similar sequences identified in nucleotide BLAST search and a global set of sequences representing different genotypes (4), by using MUSCLE (www.ebi.ac.uk/Tools/muscle/index.html). A neighbor-joining phylogenetic tree was inferred by using p-distance, with 1,000 bootstrap replicates in MEGA version 4 (www.megasoftware.net). 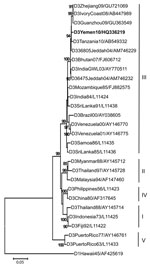 The strain isolated from Yemen in 2010 (this study) shared highest nucleotide homologies with strains from Jeddah, Saudi Arabia (98%–99%), and Tanzania (98%) and was phylogenetically grouped within genotype III of DENV-3. The most closely related strains also included recent isolates from Côte d’Ivoire, People’s Republic of China, Bhutan, and India (Figure).

Dengue has been documented in the Middle East, including Saudi Arabia (5) and Yemen (6). In May 2010, a dengue outbreak in Yemen was reported (7). The patient reported here had visited Yemen in June, and by August the outbreak had resulted in ≈100,000 infections and 200 deaths (7). To our knowledge, the DENV strains involved in this outbreak had not been previously characterized. The same genotype as the isolate described here, genotype III of DENV-3, was most recently isolated from Saudi Arabia in 2005 and has been associated with recent outbreaks in Sri Lanka, East Africa, and Latin America (8). Without further information, it remains unknown whether other serotypes or genotypes circulate concurrently in Yemen.

According to the Italian Public Health Institute (Istituto Superiore di Sanitá), the numbers of imported dengue cases in Italy are increasing (www.iss.it/binary/publ/cont/09_11web.pdf), but because only a few hospitals perform diagnostic tests, dengue is likely to be underdiagnosed in Italy. Viremic travelers can contribute to spread of DENV, and during the active mosquito season, travelers from dengue-endemic areas who have diagnosed or suspected dengue should be advised to avoid contact with mosquitoes.

Recently, indigenous transmission of dengue virus was shown to have occurred in Côte d’Azur in southern France (9) and in Croatia (10), thereby highlighting the risk in areas that have Aedes albopictus mosquitoes, which are competent DENV vectors. In these areas, including Italy, vector control and surveillance of DENV in mosquitoes should be conducted. We conclude that recognition and diagnosis of dengue in travelers should be emphasized and that characterization of DENV strains from travelers helps elucidate the molecular epidemiology of DENV in a global context.

We thank Irina Suomalainen, Antonella Rossati, Diego Brustia, Maura Bandi, Letizia Krizmancic, and Vittorio Quaglia for assistance and the Hospital District of Helsinki and Uusimaa and Academy of Finland for financial support.