In February 2006, a patient colonized with a multidrug-resistant sequence type 56 Acinetobacter baumannii strain was admitted to a hospital in Madrid, Spain. This strain spread rapidly and caused a large outbreak in the hospital. Clinicians should be alert for this strain because its spread would have serious health consequences.

The increasing resistance of Acinetobacter baumannii to antimicrobial drugs, including carbapenems (1–3), and resistance to desiccation and disinfectants (4) contribute to its persistence in hospital environments and propensity to cause outbreaks (5,6). In February 2006, a patient colonized with a multidrug-resistant A. baumannii strain was admitted to the medical–surgical intensive care unit (ICU) of a hospital in Madrid, Spain. This strain then spread rapidly, persisted for >30 months, and caused a large outbreak in the hospital. We report details of this outbreak.

MICs of drugs were confirmed by using Etest strips (AB Biodisk, Solna, Sweden) according to the manufacturer’s criteria. Multidrug-resistant (MDR) phenotypes were defined as resistance to 5 classes of drugs: antipseudomonal cephalosporins (ceftazidime, cefepime), carbapenems (imipenem, meropenem), piperacillin/tazobactam, fluoroquinolones, and aminoglycosides (gentamicin, tobramycin, amikacin). Isolates were classified on the basis of antimicrobial susceptibility patterns: antibiotype 1, MDR isolates; antibiotype 2, isolates resistant to carbapenems but not MDR; and antibiotype 3, isolates susceptible to carbapenems. Colonization was defined as isolation of A. baumannii from >1 clinical specimen in the absence of clinical symptoms consistent with infection. Bacteremia was determined by application of criteria proposed by the Centers for Disease Control and Prevention (Atlanta, GA, USA) (7). 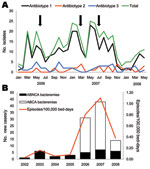 MLST analysis of 3 isolates belonging to clone AbH12O-A2 was performed to determine the relationship between these isolates and other described strains. The 3 isolates showed the same allelic profile of 7 housekeeping genes (allele no. in brackets; gltA [1], gyrB [18], gdhB [18], recA [10], cpn60 [14], gpi [29], and rpoD [18]) and were identified as sequence type 56 according to the MLST database (http://pubmlst.org/abaumannii/).

A. baumannii clone AbH12O-A2, which showed a broad antimicrobial drug-resistance profile, resistance to carbapenems, and susceptibility only to tigecycline and colistin, was present throughout the entire 30-month study and peaked several times until the medical–surgical ICU was refurbished in July 2007. The number of new case-patients with clone AbH12O-A2 then decreased; <3 cases/month were observed during October 2007–February 2008 (Figure 1, panel A).

Plasmid pMMA2 (GenBank accession no. GQ377752), which was isolated from the clone causing the outbreak (AbH12O-A2), harbored a blaOXA-24 gene (10) coding for carbapenemase OXA-24 (also called OXA-40) as described (11). Four additional clones were detected during the outbreak (AbH12O-D, AbH12O-CU1, AbH12O-CU2, and AbH12O -CU3), which harbored plasmids pMMD, pMMCU1, pMMCU2, and pMMCU3, respectively (GenBank accession nos. GQ904226, GQ342610, GQ476987, and GQ904227). Carbapenem resistance in all clones was linked to a plasmid harboring the blaOXA-24 gene flanked by XerC/XerD-like recombination sites (11). Comparative analysis among plasmid sequences showed different patterns and coding regions. All plasmids, including pMMA2, harbored the blaOXA-24 gene as part of a DNA module flanked by XerC/XerD-like sites, which suggested that these sites are involved in mobilization of DNA containing the bla OXA-24 gene by site-specific recombination (11). 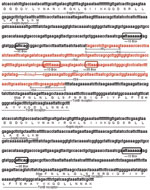 Figure 2. Nucleotide sequence of the region between the septicolysin and Ton-B dependent receptor genes of Acinetobacter baumannii in plasmids pMMA2 and pMMCU3 from clone AbH12O-A2 (upper panel) and AbH12O-CU3 (lower panel), respectively....

Two genes with a putative role in virulence were detected in plasmids from clones AbH12O-A2 and AbH12O-CU3 upstream of blaOXA-24: a septicolysin-like gene coding for a pore-forming toxin (12), and a TonB-dependent receptor gene coding for an outer membrane protein involved in iron uptake and virulence (13–15). Insertion sequence 4, which provided an additional promoter sequence, was detected upstream from the septicolysin gene in plasmid pMMA2; this sequence was absent in plasmid pMMCU3 (Figure 2). Two nucleotide changes detected in promoter regions provided an additional promoter region for the TonB-dependent receptor gene in plasmid pMMA2.

Outbreaks of MDR A. baumannii have been demonstrated in many studies (1,2,5). We report a large outbreak during 2006–2008 that persisted for >30 months. The AbH12O-A2 strain was pathogenic and caused 65 cases of bacteremia.

Clone AbH12O-A2 had unique characteristics. First, it was an MDR (including carbapenems) clone (ST56), susceptible only to tigecycline and colistin. Second, it harbored a carbapenemase blaOXA-24 gene, flanked by XerC/XerD binding sites located on a plasmid, which probably spread to other Acinetobacter clones by a Xer recombination system (11). Third, this clone overexpressed 2 putative virulence factors, septicolysin and TonB-dependent receptor.

The septicolysin gene showed 2× overexpression caused by insertion of IS4, which provided an additional promoter. Although the exact role of septicolysin is unknown, it has been designated a cholesterol-dependent cytolysin, which has been reported to be produced by pathogenic bacteria such as Clostridium perfringens, Bacillus anthracis, and Streptococcus pneumoniae to aid invasion of tissues or cells (12).

The protein produced by the TonB-dependent receptor gene has been associated with virulence and iron uptake in A. baumannii (13) and may be involved in survival of bacteria in the lungs and blood. This characteristic may explain the large rate of bacteremia caused by clone AbH12O-A2. Thus, clinicians should be alert for the MDR ST56 A. baumannii clone because its spread would have serious health consequences.