In 2009, dairy goat farms in the Netherlands were implicated in >2,300 cases of Q fever; in response, 51,820 small ruminants were culled. Among 517 culling workers, despite use of personal protective equipment, 17.5% seroconverted for antibodies to Coxiella burnetii. Vaccination of culling workers could be considered. 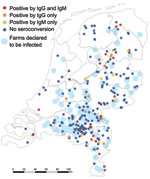 Figure 1. Residential location of 246 culling workers who were seronegative in December 2009 and their serostatus in June 2010 with location of 89 farms declared to be infected (by PCR-positive bulk-milk monitoring)...

Q fever is caused by the bacterium Coxiella burnetii. Since 2007 in the Netherlands, annual outbreaks originating from dairy goat and sheep farms have occurred. In 2009, a total of 2,354 cases in humans were reported, 20% of patients were hospitalized, and at least 6 died (1). Among acute cases, ≈2% become chronic, and fatality rates for untreated chronic patients are high (2). To stop spread, culling was conducted from December 19, 2009, through June 22, 2010, on 87 infected commercial dairy goat farms and 2 dairy sheep farms (Figure 1). A total of 50,355 pregnant goats and sheep and 1,465 bucks were culled (3). Animal pregnancies were confirmed by abdominal ultrasound; pregnant animals were sedated and euthanized, and their corpses were transported to a destruction facility. Culling workers were provided with personal protective equipment (PPE) and advised to read occupational health and hygiene regulations (4). To determine seropositivity of workers before culling, incidence of symptomatic and asymptomatic C. burnetii infection during culling, and risk factors associated with occupational exposure, we conducted a prospective cohort study.

Participants were 517 workers who culled goats and sheep during December 2009–June 2010. Serum samples were required from workers before employment in December 2009 (pre-cull) (4), and voluntary post-cull samples were requested in June 2010. In June, workers were asked to complete a questionnaire about symptoms, occupational exposure, adoption of hygiene measures and PPE use (filtering facepiece masks, gloves, overalls, hairnets), demographics, medical history, and other animal contact. Written informed consent was obtained. Information about farms (animal numbers and abortions) and workers (hours worked per person, job description) was available from occupational records.

Serum was tested for immunoglobulin (Ig) G and IgM against C. burnetii phase II by using ELISA (Virion/Serion, Würzburg, Germany). According to manufacturer instructions, IgG phase II seropositivity was defined as negative for titers <30 IU/mL and positive for titers >30 IU/mL. IgM phase II was qualitatively positive or negative. A worker was considered seronegative if a phase II sample was IgM and IgG negative and seropositive if IgM and/or IgG positive. Positive results were confirmed by immunofluorescence assay (Focus Diagnostics, Cypress, CA, USA) titers >32. Symptomatic infection was defined as fever or rigors and >1 of the following after December 1, 2009: malaise, headache, cough, nausea, diarrhea, shortness of breath, pleuritic chest pain, or myalgia. Intensity of occupational exposure was summarized as follows: hours worked, weighted mean farm size (animal number), whether animal abortions were reported, and whether work was performed on average inside or outside the stable (proxy for direct/indirect animal contact). Months worked were dichotomized as cold (December 2009–March 2010) (5) and warm (April–June 2010) (6). Use of PPE was classified as compliant or noncompliant.

To calculate distance of workers’ residence to the nearest infected farm, we used ArcGIS software (www.esri.com/software/arcgis/index.html). We used

Of 517 participants, 453 gave pre-cull blood samples, 246 of these gave post-cull samples, and 351 completed the questionnaire. Age, gender, and residential distance from the nearest infected farm were available from occupational records. Participant median age was 47 years (range 19–67 years); 97% were male. Before culling, 14 (3.1%) were IgM II and IgG II positive, 8 (1.8%) were IgM II positive only, 36 (8%) were IgG II positive only, and 395 (87%) were IgG II and IgM II negative; i.e., any seropositivity was found for 13.0%. Pre-cull blood samples indicated more seropositivity among workers who lived within 5 km of an infected farm and had regular work contact with sheep and goats (excluding culling). Prior culling experience was more common among seronegative than seropositive workers (Table 1). Among those who were IgG seropositive before culling, none became IgM seropositive after culling.

Seroconversion for C. burnetii among 17.5% of culling workers who were seronegative before culling provides evidence of high-risk work. Before culling, seroprevalence was 13%, similar to that among blood donors in a high-incidence area in the Netherlands in 2009 (H.L. Zaaijer, pers. comm.) and in similar high-risk occupational groups (7). Laboratory testing by using ELISA is an accepted method in an acute setting (8), and positive results (including positive IgM only) were confirmed by immunofluorescence assay. Nonparticipants were in the youngest and oldest age groups; their effect on the proportion of seroconversion is uncertain. Eighteen workers (excluded for not providing a follow-up blood sample) completed the questionnaire in June. Symptom incidence for these 18 workers was the same as that for included participants.

Symptomatic infection (31% of seroconverters) was probably underestimated. A diagnosis of Q fever was self-reported (unconfirmed) to the occupational health service by 8 workers who did not participate in the study. During December–July 2010, the national infectious disease surveillance system reported 11 culling-related cases of acute Q fever; 2 of these patients were hospitalized.

A strong association was shown between risk for seroconversion and total hours worked on the farms and working inside the stable. In other settings internationally, a risk gradient has also been shown for close direct and indirect animal contact over time (9,10). In our study, half the participants had experience with previous animal epidemics (avian influenza, foot-and-mouth disease, classical swine fever) and using PPE. Their compliance with PPE was reportedly high; however, a key problem was not wearing PPE while taking work breaks but remaining on the farm.

Given the high risk for infection despite extensive personal protective measures during culling, additional preventive measures are needed. The Health Council of the Netherlands issued guidelines for persons in risk groups who would benefit from vaccination against Q fever (11). Culling workers were not included in these guidelines. The efficacy of human Q fever vaccine has been shown to be high for young and healthy persons in similar occupational groups (12–14). Vaccination of culling workers could be considered if further animal culling is advised.

Dr Whelan is a fellow with the European Programme for Intervention Epidemiology Training, National Institute for Public Health and the Environment (RIVM), the Netherlands. Her research interests are Q fever in the Netherlands and other vaccine-preventable diseases.

We thank Ben Bom for providing the map and distance calculations; Daan Notermans, Marianne van der Sande, Ioannis Karagiannis, and Biagio Pedalino for their scientific input, the culling workers and their affiliated organizations for their participation; and the Food and Consumer Product Safety Authority for facilitating this study.