After 3 dengue cases were acquired in Key West, Florida, we conducted a serosurvey to determine the scope of the outbreak. Thirteen residents showed recent infection (infection rate 5%; 90% CI 2%–8%), demonstrating the reemergence of dengue in Florida. Increased awareness of dengue among health care providers is needed.

Dengue is the most common mosquito-borne viral infection worldwide (1); however, it has been eliminated from the continental United States. No locally acquired cases have been reported outside the Texas–Mexico border (2,3) in >60 years, despite global increases in incidence and severity. Concern exists that dengue virus (DENV) may be reintroduced (4) because it is the most frequent cause of febrile illness among travelers returning from the Caribbean, South America, and Asia (5). Immigrants and visitors from dengue-endemic countries also provide opportunity for its reintroduction (6).

In September 2009, the Florida Department of Health (FDOH) was notified that a person with suspected dengue had recently traveled to Key West, Florida. The Centers for Disease Control and Prevention (CDC) (Atlanta, GA, USA) confirmed the diagnosis. Subsequently, dengue was confirmed in 2 Key West residents without a history of recent travel. FDOH and CDC conducted an investigation to determine size and scope of the outbreak. Cases identified through passive surveillance were reported (7).

Key West is a tourist destination with >2 million visitors annually (8). Old Town, the area with reported cases, has a population of 19,846 (9). Aedes aegypti mosquitoes, the usual vectors of dengue, are widespread in Key West, but Ae. albopictus mosquitoes are uncommon.

In September 2009, we surveyed Old Town residents to estimate the infection rate and identify risk factors using stratified, 1-stage cluster sampling to randomly select 911 (15%) households within 1 km of the residence of the index case-patient. The area around the residences of the index case-patients was divided into 3 strata: strata 1 and 2 (within 200 m of each case-patient) and stratum 3 (201–1,000 m). Investigators asked household members (>5 years of age) for a blood sample and information on recent illness, travel, foreign residence, and risk factors for dengue. One adult per household completed a questionnaire concerning the household. Investigators revisited unresponsive households 3 times unless the homes were empty.

Serum specimens were screened by ELISA for dengue-specific IgM and IgG (10,11). IgG-positive samples were tested by plaque reduction neutralization test with 90% cutoff (PRNT90) against DENV serotypes 1–4 and West Nile virus (12). A >4-fold difference in titer between viruses was used to identify the infecting virus. Participants reporting febrile illness within a week were tested by reverse transcription PCR for DENV and West Nile virus and by nonstructural protein 1 ELISA for DENV antigen. 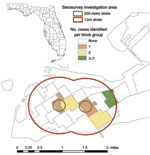 Approximately 3%–5% of Old Town residents were infected with DENV during July–September 2009, and surveillance identified new cases through October (7). Additionally, 63 cases, caused by the same strain of DENV-1, were reported there in 2010. All infections in Key West seem to have been locally acquired. Our findings that less frequent use of air conditioning, leaving windows open, and yard vegetation were risk factors for infection agree with results of previous dengue studies (2,3,14).

A specific route and time of introduction of dengue to Key West cannot be identified. The island has many tourists from dengue-endemic countries and a well-traveled population. Because the clinical features of dengue are often nonspecific, transmission was likely ongoing before the index case-patient’s condition was diagnosed and FDOH was notified. Without diagnosis of this case, the outbreak may not have been recognized. Efforts to inform local healthcare providers about the identification, diagnosis, and clinical management of dengue are ongoing.

A useful discovery was the evidence of previous infections with other serotypes among residents, which indicates that a segment of the population is at risk for secondary infection, which is associated with severe dengue (15). The survey population was well traveled, placing them at risk of acquiring severe disease during travel to dengue-endemic countries or of different dengue serotypes being introduced into Key West. Other risk factors include the age, immune status, and genetic background of the infected person (15).

This investigation was performed quickly after outbreak identification while transmission was ongoing, which allowed acute infections to be identified. Study limitations included the circumstances that many households could not be contacted and many residents refused to participate. We attempted to minimize participation bias through our sampling scheme. Also, presumptive infections may have been misclassified, which makes the 3% infection rate more likely to be accurate. Other misclassification because of prior flavivirus infection is possible, but was minimized by careful interpretation of laboratory results.

This outbreak and its continuation into 2010 demonstrate the potential for reemergence of dengue in subtropical areas of the United States where Ae. aegypti mosquitoes are present. Awareness among healthcare providers should be increased for optimal patient management and to limit outbreaks. Minimizing the effects of future dengue epidemics depends on personal protection against mosquitoes, mosquito control, early diagnosis, appropriate testing, and prompt reporting of suspected cases to public health authorities.

We thank the Monroe County Health Department and Florida Keys Mosquito Control District for their invaluable assistance with this investigation.

Financial support for this project was provided by the CDC through an Epidemiology and Laboratory Capacity grant.