We identified 131 strains of Vibrio fluvialis among 400 nonagglutinating Vibrio spp. isolated from patients with diarrhea in Kolkata, India. For 43 patients, V. fluvialis was the sole pathogen identified. Most strains harbored genes encoding hemolysin and metalloprotease; this finding may contribute to understanding of the pathogenicity of V. fluvialis.

Many members of the family Vibrionaceae cause diarrheal disease; among these, Vibrio cholerae O1/O139 and V. parahaemolyticus are responsible for several epidemics and pandemics (1,2). In Indonesia, >20% of diarrheal infections are caused by pathogenic Vibrio spp (3). Some of these Vibrio spp. can grow in thiosulfate–citrate–bile salts–sucrose agar as yellow colonies and do not agglutinate with V. cholerae O1 antiserum. These species are broadly defined as nonagglutinating (NAG) vibrios.

The emerging etiologic agent V. fluvialis has caused sporadic cases and outbreaks of diarrhea in several countries (4–6). Species-specific minimal biochemical tests, e.g., lysine decarboxylase, ornithine decarboxylase, arginine didydrolase, and L-arabinose, are used to identify V. fluvialis; without these tests, it may be confused with NAG vibrios, V. cholerae, and even Aeromonas spp. In most resource-poor countries, these tests are not performed, which may lead to labeling of V. fluvialis as a NAG vibrio.

Although V. fluvialis is known to cause diarrhea, the mechanisms involved in its pathogenicity are not well established. To evaluate the prevalence of V. fluvialis in India and possible mischaracterization as an NAG vibrio, we examined cases in which isolates from hospitalized patients with diarrhea were identified as NAG vibrios and characterized the strains using phenotypic and genetic methods.

Expression of VFH was determined in vitro by using erythrocytes from rabbit and sheep. Cytotoxin assay was performed with HeLa and Chinese hamster ovary cell lines by using sterile culture filters of the V. fluvialis strains that were isolated as a sole pathogen. Antimicrobial drug susceptibility testing was performed by using the disk diffusion method with commercially available disks (Becton Dickinson, Sparks Glencoe, MD, USA), according to Clinical and Laboratory Standards Institute criteria (13). Because these guidelines do not include interpretive criteria for V. fluvialis, breakpoints for Enterobacteriaceae were adopted. Escherichia coli ATCC 25922 was used as a quality control strain.

Among the 400 isolates presumptively identified NAG vibrios, multiplex PCR confirmed 131 and 269 strains (each strain representing a case) as V. fluvialis and V. cholerae, respectively. The overall prevalence rate of V. fluvialis among 11,904 hospitalized patients with diarrhea was 1.1%. Abrupt appearance of V. fluvialis was identified in 2002, although the surveillance of diarrheal infection was initiated at the Infectious Diseases and Beliaghata General Hospital in 1996 (www.niced.org.in/annual_reports.htm). The isolation rate of V. fluvialis gradually increased from 0.7% in 2002 to 2.2% in 2009 (Table 1). Of the 131 strains of V. fluvialis, 43 (33%) were identified as the sole pathogen; the remaining 88 (67%) were isolated as a co-pathogen with either V. cholerae, V. parahaemolyticus, E. coli, Shigella spp., parasites, or enteric viruses (data not shown). Among the mixed infections, V. fluvialis with V. cholerae was isolated most often (17%), followed by V. fluvialis and V. parahaemolyticus (8%). The presence of Vibrio spp. as mixed pathogens indicates that these patients likely acquired the infection from contaminated water or food. We analyzed the date of admission and place from where the patients resided and found no evidence for clusters of infection or small outbreaks caused by V. fluvialis.

All the V. fluvialis strains were negative for the virulence genes commonly reported in V. cholerae and V. parahaemolyticus, but >90% were positive for genes encoding VFH and metalloproteases. More than 80% of the strains expressed hemolysin against rabbit and sheep red blood cells. Hemolysin is a widely distributed virulence factor in most pathogenic Vibrio spp. Metalloprotease produced by V. fluvialis is related to hemagglutination proteases of V. vulnificus, which enhances permeability and hemorrhagic activities (12). These factors may increase the virulence of V. fluvialis and contribute to diarrhea.

When the culture filtrates were tested, cytotoxic effect was readily noticed in the Chinese hamster ovary and HeLa cell lines, i.e., cytoplasmic vacuolation, cell rounding, and destruction of the monolayer. In most strains isolated as a sole pathogen, the cytotoxic endpoint titer was 2–256 (Technical Appendix Table 1). The cell vacuolation phenomenon has been reported as a virulence factor in several enteric pathogens (Technical Appendix References).

In this study, V. fluvialis strains were highly resistant to ampicillin (92%), streptomycin (85%), furazolidone (85%), and sulfamethoxazole/trimethoprim (70%) (Technical Appendix Table 2). About half the number of strains were resistant to ciprofloxacin and 45% to nalidixic acid; the lower resistance rate for nalidixic acid compared with fluoroquinolones is unexpected and warrants further investigation to confirm the additional mechanisms. In a previous study, we found that some V. fluvialis strains carried the plasmid-mediated quinolone resistance gene allele qnrA1 and a gene encoding the aminoglycoside acetyltransferase (aac(6')-Ib-cr), which reduces ciprofloxacin activity (15). Fluroquinolone resistance and intermediate susceptibility to erythromycin (92%) are the unique features of the V. fluvialis isolated in this study; this trend was not recorded in other Vibrio spp., e.g., V. cholerae and V. parahaemolyticus. 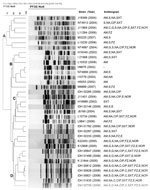 Although the V. fluvialis strains exhibited distinct NotI restriction profiles in the denrogroam analysis, at least 4 major clades were identified (Figure). Clades A and B, with strains isolated during 2002–2007, exhibited less antimicrobial drug resistance than did clade C and D strains identified during 2008–2009; multidrug-resistant strains, especially those resistant to fluroquinolones, were identified in higher numbers in clades C and D (Figure).

Our results demonstrate an emerging trend of prevalence of V. fluvialis among patients with acute diarrhea patients in Kolkata. The expression of cytotoxic activity and hemolysin may contribute to understanding the pathogenicity of V. fluvialis. Further epidemiologic studies are necessary to elucidate the public health importance of V. fluvialis–mediated diarrhea.

Mr Chowdhury is a doctoral candidate at the National Institute of Cholera and Enteric Diseases, Kolkata, India. His main research interest is the pathogenesis and molecular biology of enteric Vibrio spp.

This work was supported in part by the Ministry of Health, Labor and Family Welfare of Japan (Project H17-Shinkou-3); Initiative for Global Research Network on Infectious Diseases, Ministry of Education, Culture, Sports, Science and Technology, Japan; and intramural grants of the Indian Council of Medical Research, New Delhi, India.

Page created: October 16, 2012
Page updated: October 16, 2012
Page reviewed: October 16, 2012
The conclusions, findings, and opinions expressed by authors contributing to this journal do not necessarily reflect the official position of the U.S. Department of Health and Human Services, the Public Health Service, the Centers for Disease Control and Prevention, or the authors' affiliated institutions. Use of trade names is for identification only and does not imply endorsement by any of the groups named above.