Characterization of porcine reproductive and respiratory syndrome virus (PRRSV) isolates from pigs in Thailand showed 30-aa discontinuous deletions in nonstructural protein 2, identical to sequences for highly pathogenic PRRSV. The novel virus is genetically related to PRRSV from China and may have spread to Thailand through illegal transport of infectious animals from bordering countries.

Porcine reproductive and respiratory syndrome (PRRS) has a substantial economic effect on the swine industry worldwide. PRRS virus (PRRSV), a member of the family Arteriviridae, is the etiologic agent of the syndrome. PRRSVs are divided into 2 distinct genotypes: type 1 and type 2. The genotypes have a similar genomic organization, and 10 open reading frames (ORFs) have been identified (1–3). Nonstructural protein 2 (Nsp2) and ORF5 are the most variable regions (4,5), coding for replicase protein and neutralizing epitope, respectively.

In general, PRRSV causes a disease characterized by reproductive failure in sows and respiratory infection in growing pigs. However, in June 2006, a disease characterized by high fever and associated with a high mortality rate emerged in the People’s Republic of China (PRC), resulting in the death of >20 million pigs (6). The disease, referred to as porcine high fever disease (PHFD), was caused by a new PRRSV variant with a unique hallmark: 2 discontinuous 30-aa deletions in Nsp2. The variant, identified as a highly pathogenic (HP) PRRSV, has subsequently become endemic in PRC (7), and it has spread to other countries, including Vietnam (8) and Lao People’s Democratic Republic (Lao PDR) (9).

It is thought that HP-PRRSV spread to Thailand early in 2010. Pigs on a small farm in Nong Khai, a border province in northeastern Thailand located near Lao PDR, showed signs of illness identical to those for PHFD. Within 2 weeks of the initial outbreak, similar clinical features were observed in pigs on 19 small farms in a nearby village. Since then, pigs exhibiting similar clinical signs have been observed in >100 herds in >20 provinces throughout Thailand. The causative agent was isolated from sick pigs and determined to be PRRSV.

To further our knowledge about PRRSV in Thailand, we genetically characterized partial Nsp2 and complete ORF5 genes of PRRSV isolates. In addition, we determined sickness and mortality rates on affected farms.

During August 2010–June 2011, outbreaks of disease consistent with PHFD were investigated on 4 pig farms located in geographically separate regions of Thailand (Table 1). Herds were selected for study if farm owners agreed to participate. Pigs in all 4 herds had similar clinical signs. In 3 herds, the outbreak was initially observed in the breeding herd and lasted for ≈1 month; most deaths occurred in the third week. In those 3 herds, the initial signs of illness in sows were inappetence and high fever (40°C–42°C), followed by reddened skin and abortion. Illness rates among sows were 100%, 50%, and 60%, respectively for the 3 herds. The highest number of deaths among the sows occurred within 1 week of onset of the first symptoms. The percentage of culled sows on the 3 farms was 20.4%, 13.6%, and 6.7%, respectively; abortion rates were 52.8%, 8.4%, and 8.7%, respectively (Table 1). The outbreak in the fourth herd was confined to nursery facilities housing ≈4,000 pigs; nearly all pigs were sick within 1 week, and the mortality rate approached 60% within 2 weeks. 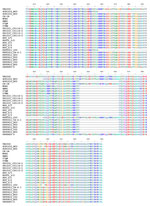 To determine the relationship of PRRSV from herds in Thailand to HP-PRRSV, we compared the partial Nsp2 amino acid sequences corresponding to aa 404–640 of ORF1a from the isolates from Thailand with sequences for HP-PRRSV from PRC and Vietnam and for strain VR2332. PRRSV isolates from Thailand possess 2 discontinuous 30-aa deletions (aa 482 and 534–562) that are identical to those in HP-PRRSV (Figure 1).

Figure 2. . . Phylogenetic analysis of types 1 and 2 porcine reproductive and respiratory syndrome virus (PRRSV) isolates constructed by the neighbor-joining method and based on the nucleotide sequences of complete ORF5...

We further investigated routes by which the virus spread. Before the outbreaks in Thailand, dead pigs were illegally transported from Lao PDR to an illegal slaughterhouse located not far from the farm where the first outbreak occurred, and the owner of the farm often visited the slaughterhouse. These findings suggest the movement of infected pigs in neighboring countries might play a role in introducing HP-PRRSV to new regions.

Infected pigs that were transported across the country and illegal slaughterhouses were the most likely routes of the spread of PRRSV within Thailand. The owners of several of the herds we investigated reported that pigs showed clinical signs within 1–2 days after trucks hauling dead pigs arrived at their farms. It was reported that dead pigs from herds in outbreak areas had been loaded on the trucks the day before they arrived at these farms. In Thailand, unlike in the United States, dead pigs are not composted, buried, or incinerated; instead, they are sold to feed catfish. Truckers associated with this trade visit pig farms to buy and transport dead pigs. These trucks are not washed, so they are a potential source of contamination on farms.

Another source for the introduction of the novel PRRSV into Thailand could be an unapproved vaccine from PRC. The phylogenetic tree demonstrated that 3 recent isolates from Thailand (UD1210US/61-F03, UD1210US/61-G03, and UD1210US/61-E03) were more genetically related to CH-1R (an attenuated vaccine strain used in PRC) than HP-PRRSV (Figure 2). CH-1R is a classical PRRSV from PRC that does not possess the 2 discontinuous 30-aa deletions in Nsp2 (15). Furthermore, CH-1R is an attenuated PRRSV vaccine strain in PRC, and there is evidence that it has been illegally smuggled into Thailand. Thus, it is possible that this modified live virus from PRC may have been administered to the herd involved in the initial outbreak in Thailand and may have been the source of the novel PRRSV strain that caused the outbreak.

A novel PRRSV, which is genetically related to PRRSV isolates from PRC, has been introduced into Thailand. Sequences of Nsp2 revealed a unique 30-aa discontinuous deletion in the novel virus, a hallmark of HP-PRRSV. The virus may have been introduced into Thailand through the illegal transport of infected materials from bordering countries, more specifically, from Vietnam to Thailand through Lao PDR. This scenario is supported by our finding that PRRSV isolates from Thailand are more homologous with an isolate from Vietnam than with isolates from PRC. The cause of viral spread within Thailand may have been the movement of infected live and dead pigs across the country.

Dr Nilubol is an assistant professor in the Department of Veterinary Microbiology, Faculty of Veterinary Science, Chulalongkorn University. His research interests are PRRSV and porcine epidemic diarrhea.

We thank Brad and Eileen Thacker for reviewing the manuscript.

Funds for this research were provided by the Thailand Research Fund (project nos. MRG5080323 and IUG5080001) and by the government of Thailand (budget year 2010).