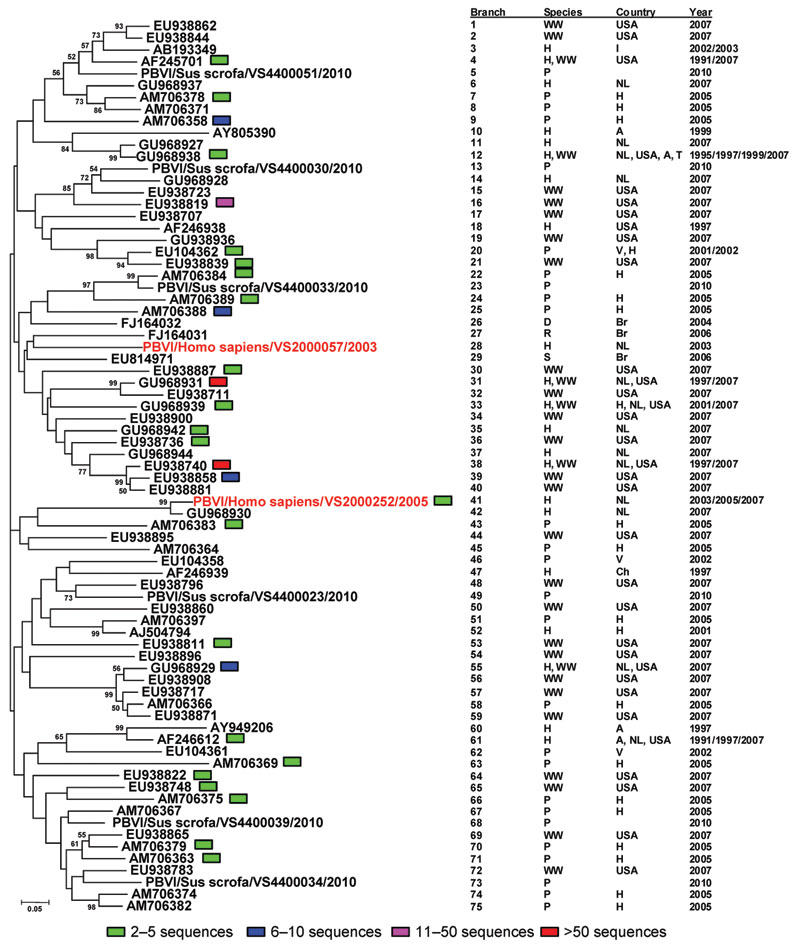 Figure. . Neighbor-joining (Jukes-Cantor model) phylogenetic tree of an ≈165-bp fragment of the genogroup I picobirnavirus RNA-dependent RNA polymerase gene from known human, porcine, and wastewater genogroup I picobirnaviruses and newly characterized genogroup I picobirnaviruses (sequences are available on request) from the human respiratory tract. Each branch represents a sequence or group of sequences (95% identical with gaps) indicated by the presence of a colored block. Every branch corresponds to the adjacent table, which explains the source, year of isolation, and location of the virus variants. Reference sequences from previously published studies are identified by their GenBank accession numbers. The designations for picobirnaviruses from various species are designated as follows: P, porcine; WW, wastewater; D, dog; S, snake; R, rat; H, human; The different countries of isolation are designated as follows: A, Argentina; Br, Brazil; Ch, China; H, Hungary; I, India; NL, the Netherlands; USA, United States of America; T, Thailand; V, Venezuela. The sequences from the newly identified human respiratory picobirnaviruses in this study comply with recent nomenclature proposals (9) and are indicated in red.

Page created: August 22, 2012
Page updated: August 22, 2012
Page reviewed: August 22, 2012
The conclusions, findings, and opinions expressed by authors contributing to this journal do not necessarily reflect the official position of the U.S. Department of Health and Human Services, the Public Health Service, the Centers for Disease Control and Prevention, or the authors' affiliated institutions. Use of trade names is for identification only and does not imply endorsement by any of the groups named above.