In 2012, an outbreak of Neisseria meningitidis serogroup W135 occurred in The Gambia. The attack rate was highest among young children. The associated risk factors were male sex, contact with meningitis patients, and difficult breathing. Enhanced surveillance facilitates early epidemic detection, and multiserogroup conjugate vaccine could reduce meningococcal epidemics in The Gambia.

The Gambian Ministry of Health and the Medical Research Council Unit, The Gambia, investigated a serogroup W135 epidemic that occurred during February–June 2012 in the Central River Region (CRR) and Upper River Region (URR). Since 2008, surveillance of invasive bacterial diseases has been ongoing in Bansang Hospital in CRR and Basse Health Centre in URR (10). The peripheral health centers refer severely ill patients to these health facilities. Three approaches were used to recruit persons with suspected cases of serogroup W135: enhanced prospective surveillance in Bansang Hospital and Basse Health Centre, retrospective case identification from hospital records, and visits to households with confirmed case-patients serogroup W135 to identify other suspected cases. A suspected case was defined as a history of acute onset of fever and any of the following: altered consciousness, inability to eat, neck stiffness, seizures, petechial rash, or bulging anterior fontanel in a child <2 years of age. Cerebrospinal fluid (CSF) and/or blood samples were collected from hospitalized persons with suspected serogroup W135. A confirmed case was a suspected case in which serogroup W135 was identified by culture and/or an antigen-specific test. The alert threshold was defined as >5 meningitis cases per 100,000 persons per week; the epidemic threshold was >10 cases (11).

The investigation team administered 1 dose of ciprofloxacin to each close contact of confirmed case-patients and provided health information to raise awareness. At the end of the epidemic, The Gambian government deployed the tetravalent meningococcal polysaccharide vaccine.

During February 1–June 25, 2012, a total of 469 suspected cases were identified, and 114 were confirmed to be serogroup W135. Thirty-one were co-primary or secondary cases in confirmed case-patients’ households. Most (67%) suspected case-patients were <5 years of age, and 56% of cases occurred in male patients. The overall case-fatality rate was 8%. 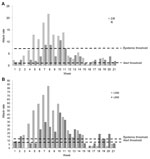 The overall AR was 111 cases per 100,000 persons but was much higher among younger children (Table 1). The epidemic threshold was exceeded in the last week of February and continued until April for persons of all ages and until June for children <5 years of age (Figure 1, panels A, B). Among children <5 years of age, the peak AR attained 83 and 47 cases per 100,000 persons per week in CRR and URR, respectively (Figure 1, panel B). The epidemic peaked during the high temperature/driest months (March–May) and ended abruptly after the first rainfalls in June (Figure 2).

The most common signs and symptoms among the 113 confirmed serogroup W135 case-patients were weakness (96%), irritability (88%), neck stiffness (81%), and inability to eat (80%). Bulging fontanelle (74%), altered mental status (73%), and seizures (65%) occurred in a slightly lower proportion of case-patients.

Blood and/or CSF samples were collected from 301 (69%) of 438 hospitalized suspected case-patients, of which almost half (138) were positive for bacterial pathogens. Serogroup W135 was the major pathogen (114 [83%] of 138); followed by Streptococcus pneumoniae (13%) and Staphylococcus aureus (2%). Common antibacterial drugs used for meningitis were tested on 92 (81%) serogroup W135 isolates, which were susceptible to most of them (ampicillin, 100%; chloramphenicol, 99%; ciprofloxacin, 99%; penicillin, 95%; and tetracycline, 92%) but not to erythromycin (59% susceptible) and trimethoprim/sulfamethoxazole (100% resistant).

Before the current cases, the most recent sporadic cases in The Gambia were reported in the early 1990s. These cases were part of a larger epidemic in the meningitis belt with a comparable predominance of serogroup W135 followed by S. pneumoniae (1). After introduction of MenAfriVac (serogroup A conjugate vaccine), incidence and epidemics caused by serogroup A decreased substantially in the meningitis belt (6,12). The reemergence of epidemic serogroup W135 in this region requires a strategy for surveillance, epidemic detection and control, and revised vaccination policy.

Serogroup A outbreaks usually affect children >5 years of age and young adults (5,13,14). However, two thirds of the serogroup W135 cases occurred in children <5 years of age, for whom the AR was 5-fold higher than it was for older age groups, similar to the characteristics of the serogroups W135 outbreaks in Burkina Faso (2002–2003) and Niger (2010) (3,5). Therefore, the current operational definition of alert and epidemic thresholds, drawn mostly from serogroup A data, should be revised because merging the AR for all age groups may delay, or result in nondetection of, a serogroup W135 epidemic in younger age groups.

Signs and symptoms of concurrent respiratory illness were more prevalent among case-patients than controls;, itchy eyes and difficult breathing were associated with disease. The temporal sequence of these signs relative to the occurrence of meningococcal disease was not determined, and whether these factors facilitated the invasion of serogroup W135 carried in the nasopharynx or whether these symptoms were part of the initial serogroup W135 infection before onset of severe disease is unclear. Contact with confirmed serogroup W135 case-patients was a strong risk factor. These results are consistent with information available for the other serogroups and with the route of serogroup W135 transmission through droplet infection (15).

Our findings suggest that isolation of case-patients and prophylactic treatment of contacts may reduce transmission of meningococcal disease during epidemics. Enhanced surveillance for meningitis is recommended for early detection of epidemics. The occurrence of this large serogroup W135 outbreak suggests that multiserogroup conjugate vaccine should be deployed for control and prevention.

Dr Hossain is a clinical epidemiologist and medical graduate working in the Child Survival Theme of the Medical Research Council Unit, The Gambia. His research interests are diarrheal diseases, emerging infections, and infectious diseases.

We thank the communities of the CRR and URR of The Gambia, the staff of the government health facilities, the Regional Health Teams, and the Ministry of Health for participating and supporting outbreak investigation. We also thank Lady Chilel Sanyang and Jarrah Manneh for laboratory testing; Golam Sarwar and Sarra Baldeh for organizing the data; and Edrissa Sabally and Yerro Bah for coordinating the field team and data collection. We thank Pa Cheboh Saine for the logistical support.

The study was supported by the Medical Research Council. The Bill & Melinda Gates Foundation funded the prospective bacterial disease surveillance.