We investigated the infection rate for severe fever with thrombocytopenia syndrome virus (SFTSV) among ticks collected from humans during May–October 2013 in South Korea. Haemaphysalis longicornis ticks have been considered the SFTSV vector. However, we detected the virus in H. longicornis, Amblyomma testudinarium, and Ixodes nipponensis ticks, indicating additional potential SFTSV vectors.

Severe fever with thrombocytopenia syndrome (SFTS) is an emerging disease characterized by fever and thrombocytopenia. The syndrome is caused by SFTS virus (SFTSV), a member of the family Bunyaviridae, genus Phlebovirus (1). SFTSV is related to, but distinctly different from, Heartland viruses, which were isolated in the United States (2).

The first case of SFTS was reported in China during 2010 (1), and in 2013, SFTSV infections were reported in South Korea and Japan (3–5). In South Korea, the first human case of SFTS was confirmed in May, 2013 (3). Although person-to-person transmission of SFTSV through contact with the blood or mucus of an infected person has been reported (6,7), the virus is primarily transmitted to humans by the bite of SFTSV-infected ticks. The virus has been detected in Haemaphysalis longicornis Neumann (bush tick) and Rhipicephalus microplus Canestrini (southern cattle tick) ticks (1,8).

We collected a total of 261 ticks (113 nymphal, 7 adult male, and 141 adult female ticks) from humans during May–October 2013. The ticks were placed in plastic tubes and transported to our laboratory for identification to species and developmental stage (11); we used a dissecting microscope for identification purposes. Tick samples were homogenized in 600 μL of phosphate-buffered saline (pH 7.0) containing 10% fetal bovine serum (GIBCO BRL, Grand Island, NY, USA), penicillin (500 IU/mL, GIBCO BRL) and streptomycin (500 μg/mL, GIBCO BRL) by using the Precellys 24 tissue homogenizer (Bertin Technologies, Bretonneux, France) and 2.8-mm stainless steel beads. We used a viral RNA extraction kit (iNtRON Biotechnology, Seongnam, South Korea) to extract RNA from the supernatant of the tick homogenates. To detect SFTSV RNA, we performed a 1-step reverse transcription PCR (RT-PCR) using a DiaStar 2× OneStep RT-PCR Pre-Mix Kit (SolGent, Daejeon, South Korea) with designed primers, MF3 (5′-GATGAGATGGTCCATGCTGATTCT-3′) and MR2 (5′-CTCATGGGGTGGAATGTCCTCAC-3′), under the following conditions: an initial step of 30 min at 50°C for reverse transcription and 15 min at 95°C for denaturation, followed by 35 cycles of 20 s at 95°C, 40 s at 58°C, and 30 s at 72°C, and a final extension step of 5 min at 72°C. 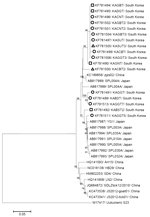 Figure. Phylogenetic analysis of severe fever with thrombocytopenia syndrome viruses based on the partial medium segment sequences (560 bp)The tree was constructed by using the neighbor-joining method based on the p-distance model...

H. longicornis ticks have been considered the principal tick vector of SFTSV; there is limited information on SFTSV infection by other tick species. On the basis of our findings, we propose that A. testudinarium and Ix. nipponensis ticks, from which we detected SFTSV, might serve as potential vectors of this virus in South Korea. However, the presence of viral RNA in a tick does not confirm that the tick can transmit the virus. To our knowledge, A. testudinarium and Ix. nipponensis ticks have not previously been considered as SFTSV vectors.

Further studies, including studies to isolate SFTSV from infected tick vectors and laboratory vector competence studies, are needed to confirm whether A. testudinarium and Ix. nipponensis ticks transmit SFTSV to humans. We attempted to isolate SFTSV from the SFTSV-positive ticks in our study by using Vero E6 cells but were unable to do so.

Adults and nymphs of Haemaphysalis and Ixodes spp. have been collected most frequently from humans, but larvae have not been collected. We did not detect SFTSV from adult male ticks in our study; however, the number of collected ticks was small. In another study in South Korea, ticks were collected from medium- and large-sized mammals (9), and the species and developmental stage of ticks in that study were similar to those in our study. In that study, H. longicornis and Ix. nipponensis ticks were most frequently found on wild boar, water deer, roe deer, raccoon dog, Siberian weasel, Asian badger, and leopard cat. Although A. testudinarium ticks were not collected from mammals in that study, we did collected them from humans in our study.

The prevalence of SFTSV in H. longicornis ticks in our study was 5.7%. In 27 other localities in 9 South Korean provinces, the mean SFTSV MIR of H. longicornis ticks collected by dragging or sweeping in the environment was 0.5% (S.-W. Park et al., unpub. data). In a study of SFTSV in China, 0.7%–5.4% of the tick population was positive for SFTSV (13). In the United States, 0.02% of field-collected ticks were positive for Heartland virus (14). The SFTSV MIR for ticks in Japan has not been reported.

Farmers and agricultural and forest workers from rural areas are at high risk for SFTS because their work environment increases their risk of contact with SFTSV-infected ticks (15). In our study, most ticks were collected from persons who lived in rural areas. Although 18 persons were bitten by ticks infected with SFTSV, not all of them had signs or symptoms of SFTS. This finding suggests that further studies are needed to obtain a detailed understanding of SFTS as an emerging tickborne viral disease and to develop preventive measures for the disease.

Mr Yun is a senior researcher at the Division of Arboviruses, National Institute of Health, Korea Centers for Disease Control and Prevention. His research interests focus on tickborne viral diseases.

We thank the staff members at the Regional Health Institutes for the help they provided with this study.