Levofloxacin resistance in Haemophilus influenzae has increased significantly in Taiwan, from 2.0% in 2004 to 24.3% in 2010 (p<0.001). Clinical and molecular investigations of 182 levofloxacin-resistant isolates revealed that the increase was mainly the result of the spread of several clones in the elderly population in different regions.

Since their first introduction in 1980s, fluoroquinolones have been used extensively (1). The wide use of these antimicrobial drugs has been attributed to the emergence of resistance in several bacterial species (1,2). Respiratory tract infection (RTI) is one of the most common conditions for which fluoroquinolones are used (1,3). Haemophilus influenzae is a major bacterial pathogen causing RTIs. Globally, fluoroquinolone resistance in H. influenzae has remained sporadic and uncommon, and international surveillance data showed the resistance rate to be <1% (4–6). However, emergence of fluoroquinolone-resistant H. influenzae strains has been reported in elderly patients and in those in long-term care facilities (7–9).

The Taiwan Surveillance of Antimicrobial Resistance (TSAR) is a biennial nationwide surveillance program of inpatient and outpatient clinical isolates (10). Levofloxacin-resistant H. influenzae isolates were not detected in the TSAR collection before 2002 but emerged in 2004, and prevalence increased rapidly. We conducted a study to delineate the clinical and molecular characteristics of emerging levofloxacin-resistant H. influenzae in Taiwan. 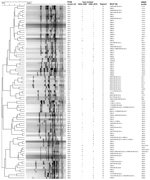 Our study indicates that levofloxacin-resistant H. influenzae emerged in Taiwan around 2004 and increased over the next 6 years, especially in elderly patients, regional hospitals, and central and southern Taiwan. We found age and regional differences in this resistance phenotype, which might have resulted from differences in fluoroquinolone use and patient populations.

In our study, isolates of the same PFGE cluster mostly had similar mutation patterns. Therefore, the emergence of fluoroquinolone-resistant isolates may be the results of several clones spreading in the same region. However, isolates within the same PFGE cluster having the same ST but different QRDR mutation patterns were also found. In addition, nearly all the levofloxacin-resistant H. influenzae isolates belong to 7 previously unreported STs or their SLVs. This finding indicates that the emergence of levofloxacin-resistant isolates likely occurred through spontaneous mutation of hypermutable clones under selective pressure (8,14), and these clones then disseminated locally in each region.

In summary, our study revealed the emergence and spread of levofloxacin-resistant H. influenzae in different regions of Taiwan, with regional predominance of certain STs. We studied a large number of levofloxacin-resistant H. influenzae from clinical diagnostic samples of multiple hospitals in different regions of Taiwan, so physicians should take into account the high rate of fluoroquinolone resistance when they prescribe empirical therapy for H. influenzae infections. Surveillance and intervention measures should be directed at the risk groups identified in this study to halt the increase in fluoroquinolone resistance in H. influenzae.

This project was supported by intramural grants from the National Health Research Institutes (IV-101-PP-01 and IV-102-PP-01).