Human Parvovirus 4 Infection among Mothers and Children in South Africa 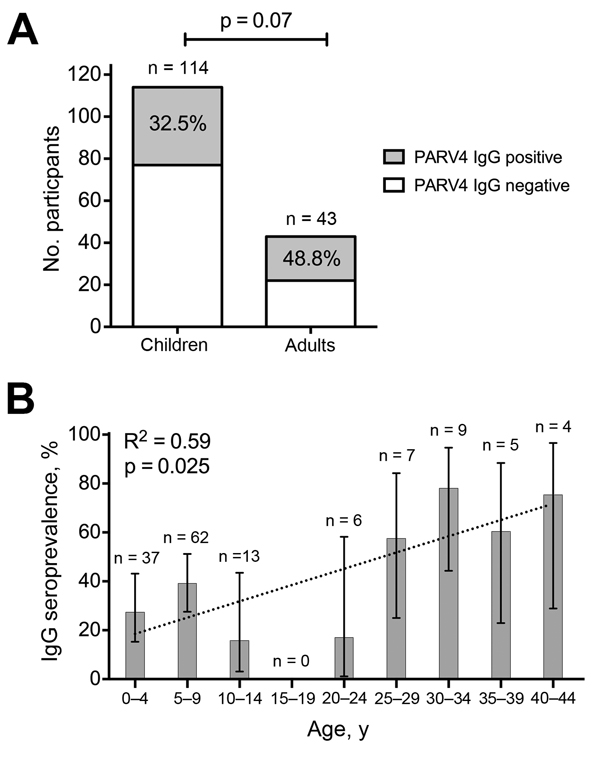 Figure. Relationship between age and seroprevalence of IgG against human parvovirus 4 (PARV4) among 157 mothers and children in Kimberley, South Africa, 2009–2013. A) Number and proportion of children and adults seropositive for IgG against PARV4; the number in each group is shown above the bar. p value calculated by using the Fisher exact test. B) Proportion of population seropositive for IgG against PARV4 according to age; the number in each group is shown above the bar. Data are shown for 143 persons because no date of birth was recorded for 2 children and 12 adults. Error bars show 95% CIs calculated by the adjusted Wald method. R2 was calculated by linear regression (dotted line). We considered whether maternal antibodies might be contributing to PARV4 IgG seroprevalence among those 0–4 years of age. However, from 11 children in this group who were <12 months of age (in whom detection of maternal antibody might still be expected), 2 were PARV4 IgG seropositive, and only 1 of these had an IgG-positive mother, suggesting that maternal antibodies did not contribute significantly to PARV4 seropositivity in this cohort.