After heavy rains and flooding during early 2011 in the normally arid interior of Australia, melioidosis was diagnosed in 6 persons over a 4-month period. Although the precise global distribution of the causal bacterium Burkholderia pseudomallei remains to be determined, this organism can clearly survive in harsh and even desert environments outside the wet tropics.

Melioidosis, a tropical disease caused by the bacterium Burkholderia pseudomallei, is endemic to Southeast Asia and northern Australia and is being increasingly recognized in other locations globally (1,2). During 1989–2009, a total of 540 cases of melioidosis were documented in a prospective melioidosis study based at Royal Darwin Hospital (latitude 12.4°S) in the tropical north of the Northern Territory of Australia (3). During that 20-year period, 4 of the study participants were considered to have been infected in the central Australia region of the Northern Territory; the other 536 were infected in the tropical north. During the same period, 2 persons who were not included in that study tested positive for B. pseudomallei in the central Australian region and were treated at Alice Springs Hospital (23.8°S), making a total of 6 cases of melioidosis during 20 years attributed to B. pseudomallei infection acquired in Central Australia. The ongoing Darwin prospective melioidosis study is approved by the Human Research Ethics Committee of the Northern Territory Department of Health and Menzies School of Health Research (approval 02/38). 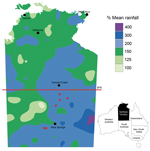 Figure. Rainfall in the Northern Territory of Australia during August 1, 2010–July 31, 2011. Rainfall is expressed as percentages of historical mean; the lowest rainfall total was 100% of mean. Cities and...

Central Australia (also known as the “Red Centre”) is the most inland part of the arid interior of Australia and features low average annual rainfall, a desert environment, and rivers that are often dry. During March–July 2011, a total 6 cases of melioidosis were diagnosed in patients from Central Australia who resided south of latitude 20°S (Figure) and had not traveled to the tropical north of the country or to overseas regions to which melioidosis is endemic. These cases occurred after exceptionally heavy rainfall in February and March 2011, which resulted in widespread flooding in this normally parched region. The heavy rainfall in Central Australia was linked to a La Niña–associated, record-breaking wet season during 2010–2011 in the tropical north of the Northern Territory (Figure). Tropical Cyclone Carlos formed over the Beagle Gulf north of Darwin on February 15. At Darwin airport, the total rainfall during February 2011 of 1,110.2 mm and during the October–April wet season of 2,926.8 mm were the highest on record for that weather station. At Alice Springs airport, rainfall was 107.6 mm during February 2011, compared with a February mean of 40.3 mm during 1981–2010. The February 2011 rainfall at Tennant Creek airport (19.6°S) was 309.6 mm, compared with a February mean of 122.3 mm during 1981–2010. During the month of March 2011, when the first 3 patients became ill, rainfall amounts at Alice Springs and Tennant Creek airports were 120.6 mm and 222.6 mm, respectively; the annual mean March rainfalls in these locations during 1981–2010 were 35.4 mm and 53.8 mm, respectively.

The 6 persons whose illnesses were diagnosed as endemic melioidosis were treated at the central Australia hospitals in Alice Springs and Tennant Creek (Table). Of the 6 patients, 3 were male and 5 were indigenous Aboriginal Australians; 3 became bacteremic and required intubation and ventilation in intensive care for severe sepsis. The only patient <50 years of age and no identified risk factor had the mildest disease, characterized by a localized skin abscess. All patients were treated according to standard guidelines (1): with initial intravenous ceftazidime or meropenem, then with oral eradication therapy, which is usually with trimethoprim/sulfamethoxazole. All 6 patients survived.

Rainfall in the region returned to normal patterns and there have been no further locally acquired cases of melioidosis in Central Australia. Two persons with confirmed melioidosis were treated at Alice Springs Hospital in August 2011 and December 2014; both were attributed to infection acquired while traveling to the tropical north of the Northern Territory.

B. pseudomallei isolates from the 6 patients were subjected to multilocus sequence typing (MLST) as described by Godoy et al (4). On interrogation of the global B. pseudomallei MLST database (http://bpseudomallei.mlst.net/), each of the 6 isolates was unique and a novel sequence type (ST) (Table). ST907 has 2 novel alleles (gmhD, 54 and lipA, 48) and ST905 has 1 novel allele (lepA, 44); the remaining 4 STs contained unique configurations of existing alleles. None of the 6 STs was a single-locus variant of any ST in the MLST database (i.e., sharing 6/7 alleles), but all in the database except ST904 had double locus variants (i.e., sharing 5/7 alleles) that were B. pseudomallei isolates from northern Australia. Subsequent environmental soil sampling from Central Australia has confirmed the endemic presence of B. pseudomallei in several locations, and further studies are planned to characterize the environmental correlates of such B. pseudomallei–positive sites in Central Australia (M. Mayo, B.J. Currie, unpub. data).

Historically, melioidosis has been found to occur in the wet tropics between latitudes 20°S and 20°N (5,6). Nevertheless, the first recognition of melioidosis in Australia was in an outbreak among sheep in 1949 at Winton, Queensland (22.4°S) (7), an arid location with geographic similarities to Central Australia and where flooding also sporadically occurs. Case clusters of melioidosis have also occurred even further south in Australia: 1 cluster spanned 25 years in temperate southwestern Western Australia (31°S) (8). Severe weather events with heavy rainfall have dramatically increased the case numbers in regions in Australia and overseas to which the organism is endemic (9,10) and have also unmasked melioidosis in locations where it was uncommon or not previously recognized as being endemic (11–13).

Although genotype profiles showed the 6 isolates to be closer to STs of other Australian B. pseudomallei than to STs from Southeast Asia and the rest of the world, the extensive diversity among B. pseudomallei in Central Australia is evident in that each isolate is a novel ST and that none has any known single-locus variants. This diversity is similar to the situation seen in tropical northern Australia and in northeast Thailand (14) and contrasts with endemic melioidosis identified in Puerto Rico, which was recently shown to be mostly restricted to a single ST (15). The limited genetic diversity of B. pseudomallei seen in Puerto Rico to date is consistent with more recent introduction of B. pseudomallei to that location, potentially through importation of infected animals, as has occurred elsewhere (2). Importation of infected animals from the tropical north of Australia was also considered a possible source of the clonal cluster of melioidosis seen in various animals and in a person in southwestern Western Australia (8).

Heavy rains and flooding in the normally arid interior of Australia early in 2011 were followed by 6 cases of melioidosis over a 4-month period. Although the true extent of the environmental presence of B. pseudomallei remains to be determined, both regionally and globally (1,2), these bacteria can clearly survive in harsh and even desert environments outside the traditionally recognized melioidosis-endemic regions of the wet tropics. Melioidosis should therefore be considered in such regions, especially after heavy rainfall and flooding.

We thank the laboratory scientists at Alice Springs and Tennant Creek hospitals and at SA Pathology for assistance with identification and provision of bacterial strains. We also thank Martin Cutter for epidemiological support.

This work was supported by the National Health and Medical Research Council of Australia (grant numbers 605820, 1046812) and by the Wellcome Trust (grant number WT089472).