Two cases of disseminated enteroviral infection occurred in patients who received the CD20 monoclonal antibody obinutuzumab. Clinical features included hepatitis, edema, and a dermatomyositis-like syndrome. These manifestations may be unfamiliar to clinicians and are possibly responsive to intravenous immunoglobulin. Clinicians should remain vigilant for enteroviral infections in patients receiving obinutuzumab.

Viral, fungal, and bacterial infections (1,2) and a recent case of enteroviral meningoencephalitis (3) associated with obinutuzumab use have been described. Early recognition is critical because the infection can be effectively treated with intravenous immunoglobulin (IVIg).We report 2 cases of disseminated enteroviral infections in patients in Australia treated for lymphoma with the CD20 monoclonal antibody (mAb) obinutuzumab. Clinical features, including hepatitis, edema, and a dermatomyositis-like syndrome, were similar to those mentioned in the original descriptions of disseminated enteroviral infections in children with X-linked agammaglobulinemia (XLA) (4,5). 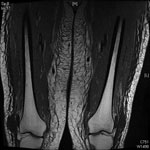 During summer 2014, a 35-year-old woman with symptomatic follicular lymphoma achieved a complete clinical and radiological response to induction treatment with 6 cycles of bendamustine and obinutuzumab; she subsequently took obinutuzumab for an additional 8 weeks. Twelve months after she began taking obinutuzumab, she sought treatment for fever, headaches, and myalgias. Peripheral blood lymphocyte count was 0.40 × 109 cells/L (1,2,4,5). Cerebrospinal fluid was acellular, but we detected enterovirus in cerebrospinal fluid and feces by using PCR. Sequencing of the PCR product was unsuccessful, and we could not identify the enterovirus strain. Immunoglobulin levels were at the lower end of the reference ranges: IgG 7.9 g/L (reference range 7.5–15.6 g/L), IgM 0.6 g/L (reference range 0.5–3.0 g/L), and IgA 1.5 g/L (reference range 0.8–4.5 g/L). Results of liver function tests were initially normal, but liver function deteriorated after 2 weeks. Peak level of bilirubin was 86 μmol/L (reference range 0–20 μmol/L), of alanine amino transferase was 1,419 IU/L (reference range 7–56 UI/L), of alkaline phosphatase was 117 U/L (reference range 30–120 U/L), and of albumin was 28 g/L (reference range 35–45 g/L); international normalized ratio peaked at 2.0 (reference range 0.8–1.2). Results of liver biopsy showed active hepatitis. Results of tests to determine possible causes of hepatitis and encephalitis were negative; the tests included those for autoantibodies, HIV antibodies, thyroid function, and PCR for respiratory viruses (including influenza) and herpesvirus. Bacterial and fungal cultures were negative. Obinutuzumab was ceased, and the patient was treated with 0.8 g/kg IVIg. All clinical and laboratory features rapidly improved.

Anti-CD20 mABs such as rituximab are now standard of care for treatment of B-cell lymphoma in combination with chemotherapy. The US Food and Drug Administration approved obinutuzumab in September 2013 for use in chronic lymphocytic leukemia, but indications for use probably will expand. Obinutuzumab is glycoengineered to cause more profound and rapid B-cell depletion than rituximab, elicited by subtle differences in the orientation of binding to the CD20 molecule between the 2 drugs (6). As a result of these binding differences, compared with rituximab, obinutuzumab has superior induction of apoptosis, natural killer cell activation, and antibody-dependent cytotoxicity but less complement-dependent toxicity (6).This mechanism may also explain the differences in susceptibility to, and patterns of, enteroviral infections associated with obinutzumab, resulting in a phenotype similar to XLA (5).

The clinical features described in most cases of disseminated enteroviral infections relate to chronic meningoencephalitis (2,5). However, several reports describe a dermatomyositis-like syndrome with edema and hepatitis that responded to IVIg (5); this syndrome is strikingly similar to the cases reported here. Enteroviral infections (coxsackieviruses and echoviruses) also have been implicated in the pathogenesis of myositis (9). Enterovirus PCR was positive from the muscle biopsy of the patient in our report, suggesting that the virus had a direct role in pathogenesis of the myositis.

Future studies could define susceptibility to enteroviruses through the effect of obinutuzumab on B-cell and immunoglobulin function and host defense against enteroviral infections. It would be clinically useful to identify biomarkers or clinical predictors of disseminated infection. Future research might also focus on the development of a screening strategy for enteroviral infections followed by prophylactic or preemptive therapy with IVIg.

The clinical manifestation of disseminated enteroviral infections, particularly those similar to dermatomyositis, may be unfamiliar to clinicians caring for adults because most experience of the illness is in children and there have been few reports in recent years. Given the therapeutic response to IVIg in the cases we report, enteroviral infection and the use of IVIg therapy should be considered in patients treated with obinutuzumab who develop atypical clinical features of organ inflammation.

Dr. Dendle is an infectious diseases physician at Monash Health and researcher at Monash University. She specializes in immunocompromised hosts and is especially interested in infections in patients with hematologic malignancies and who have undergone transplantation.