Bacteria genetically related to Coxiella burnetii have been found in ticks. Using molecular techniques, we detected Coxiella-like bacteria, here named Candidatus Coxiella massiliensis, in skin biopsy samples and ticks removed from patients with an eschar. This organism may be a common agent of scalp eschar and neck lymphadenopathy after tick bite.

During 2011–2014, we identified patients in hospitals throughout France, who had eschars after tick bite. We retrospectively tested skin biopsy or swab samples of the eschars, serum samples when possible, and ticks from the patients. Ticks were identified by matrix-assisted laser desorption/ionization time-of-flight mass spectrometry (Bruker Daltonics, Billerica, USA) (6). All human samples and ticks were tested for Rickettsia, Borrelia, Bartonella, and Ehrlichia spp.; Francisella tularensis; Staphylococcus aureus; and Coxiella burnetii by quantitative PCR (qPCR) (2,7). On the basis of the aligned rrs gene sequences of Coxiella-like bacteria, we developed a specific qPCR to detect the DNA of all Coxiella species and degenerated primers aimed to amplify a 659-bps long portion of the groEL gene of Coxiella spp. (Technical Appendix Table 1). Skin biopsy samples were also tested by universal eubacteria 16S rRNA gene amplification and sequencing (7).

Five spawns of Rhipicephalus sanguineus ticks infected with Candidatus C. massiliensis were used for antigen production (8). Molecular assays indicated that these spawns were negative for Rickettsia, Borrelia, Bartonella, Ehrlichia spp.; F. tularensis; S. aureus; and C. burnetii. We used spawns of R. sanguineus ticks without Candidatus C. massiliensis infection as negative controls to confirm that their antigens did not react with serum from the patients. To confirm the presence of Candidatus C. massiliensis, we used qPCR and transmission electron microscopy to visualize the bacteria (Technical Appendix Figure). To determine the specificity of our immunofluorescence assay (IFA), we used healthy blood donors as negative controls; to determine if there was cross-reactivity with C. burnetii, we used serum from patients with Q fever.

Patients were considered infected with Coxiella-like bacteria when a skin biopsy sample was positive by qPCR and there was no evidence of infection with another agent. Patients were considered possibly infected if they had clinical signs (fever, skin eschar, local lymph node enlargement) and if a removed tick was positive for Coxiella-like bacteria according to qPCR but no skin biopsy was sampled or when serologic results were positive. For data comparison, we used Epi Info 6.0 (https://wwwn.cdc.gov/epiinfo/html/ei6_downloads.htm). We considered a p value of 0.05 to be significant. 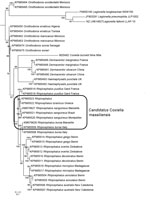 Phylogenetic analysis based on groEL confirmed that Coxiella spp. from ticks of different species are genetically very distant (9). On the basis of phylogenetic clustering, epidemiologic role, and the fact that we used its antigens for the diagnostic of human infection, we propose the name for the Coxiella-like bacteria associated with R. sanguineus, R. turanicus, and H. pusillus ticks to be Candidatus C. massiliensis (Figure 1).

We tested convalescent-phase serum from 5 patients. Total immunoglobulin titers of 1:400 against Candidatus C. massiliensis were detected for 1 patient and >1:800 for 2 patients (Figure 2). All IgG titers obtained were identical. These results indicated an infection caused by Candidatus C. massiliensis. IFA results indicated that all patients were negative for Rickettsia spp., C. burnetii, F. tularensis, and Bartonella spp. Among serum samples from 40 blood donors, total immunoglobulins titer was 1:200 for 6 donors and IgG titer was 1:400 for 1. Receiver operating characteristic curves, defined by the true-positive rate (serum from patients infected with Candidatus C. massiliensis) as a function of the false-positive rate (serum from blood donors) demonstrated that for a total immunoglobulin cutoff of >1:400, sensitivity was 60% and specificity was 100%, and for an IgG cutoff of >1:400, sensitivity was 60% and specificity was 98%. Moreover, among 13 patients with acute Q fever, 12 with Q fever endocarditis, and 5 who had had Q fever in the past, serum was positive for Candidatus C. massiliensis, indicating the cross-reactivity of our IFA with C. burnetii.

Of 465 skin biopsy samples from 465 patients, cell culture results (10) were negative for all. However, samples from 8 (2%) patients were positive for Candidatus C. massiliensis, and a possible infection was considered for another 7. Of these 15 patients, 8 (53%) were female, 8 had recently participated in outdoor activities in France, and 2 had recently traveled to Algeria and Israel. Three cases occurred during winter, 9 during spring, and 4 during summer. All patients had an eschar, regardless whether they had lymphadenopathy (Table). A scalp eschar with cervical lymphadenopathy was common (40%). Other common findings were fever (40%), increased C-reactive protein (60%), and thrombocytopenia (40%). Most patients received oral doxycycline, 2 with macrolides and 2 with a β-lactam. Symptoms resolved for all patients.

We determined that Candidatus C. massiliensis is an etiologic agent of human infections. For our molecular assay, we routinely included large numbers of negative controls that were processed identically to the test samples. Only Coxiella-like bacteria DNA was present in the samples, indicating that these bacteria were the only infectious agents. Supplementary serologic testing was used to confirm the molecular results, and results were validated with samples from blood donors; specificity was good but sensitivity was low. The fact that all serum tested demonstrated IgG only does not eliminate the possibility of previous exposure (patients and blood donors) because these bacteria are common in ticks (9). Although Candidatus C. massiliensis IFA results were cross-reactive with C. burnetii, all patients were negative for C. burnetii.

Most patients had a scalp eschar and cervical lymphadenopathy, reminiscent of a recently proposed clinical entity named SENLAT (scalp eschar and neck lymphadenopathy after tick bite) (11). All symptoms arising from Candidatus C. massiliensis infection can be easily attributed to other infectious agents transmitted by ticks (12,13) and can easily go unrecognized because of the absence of systematic research on these bacteria and the nonspecific clinical manifestations of diseases caused by them. Most patients in our study were empirically prescribed doxycycline, the treatment of choice for many tick-transmitted infections (14). We illustrated the value of systematically testing for Candidatus C. massiliensis in skin biopsy samples. Candidatus C. massiliensis may be a common agent of SENLAT, which may go unrecognized or misdiagnosed as a sign of another tick-transmitted infection.