Analysis of hemorrhagic fever with renal syndrome cases in Zibo City, China, during 2006–2014 showed that it occurred year-round. Peaks in spring and fall/winter were caused by Hantaan and Seoul viruses, respectively. Rodent hosts were the striped field mouse for Hantaan virus and the brown rat and house mouse for Seoul virus.

Hemorrhagic fever with renal syndrome (HFRS) is caused by hantavirus and transmitted primary by rodents (1,2). HFRS occurs worldwide, but ≈90% of HFRS cases have been reported in China (3). During 2006–2012, a total of 77,558 HFRS cases, including 866 deaths, were reported in China (4). Zibo City in Shandong Province, located in eastern China, has a high incidence rate of HFRS (5,6). We analyzed the clinical data for HFRS cases and surveyed the prevalence of hantaviruses in rodent populations in rural area of Zibo City during 2006–2014. 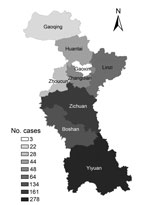 HFRS cases peaked twice each year. The spring peak occurred during March–May, and the fall/winter peak occurred during October–December (Figure 2). Serum samples from 36 patients from 2006 through 2008 were typed by focus reduction neutralization test with Hantaan virus (HTNV) strain 76-128 and Seoul virus (SEOV) strain UR in Vero cells. Reducing 80% of plaques was considered a positive result (7). Focus reduction neutralization test showed that 93.4% (15/16) patients from the spring peak were infected with SEOV, and 85% (17/20) from the fall/winter peak were infected with HTNV.

During 2006–2014, we trapped 559 rodents with 21,384 snap-traps in residential area (inside and outside farmhouse) and in fields. The rodents’ lungs were tested for hantavirus antigen with monoclonal antibody (Shanghai Institute of Biologic Products, Shanghai, China) by direct immunofluorescence assay (8,9). We detected hantavirus antigens in 29 (5.2%) rodents. In residential areas, the brown rat (Rattus norvegicus) was the predominant rodent species and had the highest infection rate (5.3%, 21/393). The house mouse (Mus musculus) was next in both population and infection rate (2.4%, 1/42). Other residential rodents were all negative for hantavirus, including 16 Chinese hamsters (Cricetulus griseus) and 1 striped field mouse (Apodemus agrarius). Among field rodents, the striped field mouse was the most common species and had the highest hantavirus infection rate (11.9%, 7/59). Other field rodent species were all negative to hantavirus, including 27 brown rats, 18 buff-breasted rats (R. flavipectus), and 3 house mice. Infection rates for the striped field mouse, brown rat, and house mouse did not differ significantly (χ2 = 5.50, p = 0.06). The hantavirus antigen–positive rodents were further tested by reverse transcription PCR amplification of hantavirus M segment (10) from lung tissue, and 19 rodents were PCR positive. BLAST analysis (http://blast.ncbi.nlm.nih.gov/Blast.cgi) indicated that 13 sequences belonged to SEOV and 6 belonged to HTNV. SEOV-positive rodents were all brown rats from residential areas, and HTNV-positive rodents were all striped field mice from field areas. The reverse transcription PCR–positive rate was 3.3% (13/393) for SEOV in brown rats from residential areas and 10.2% (6/59) for HTNV from field areas.

Dr. Ling Wang is a scientist in the Infectious Disease Department in Zibo Center for Disease Control and Prevention, Zibo City, Shandong Province, China, Her research interests include surveillance of hantavirus and emerging viral pathogens.