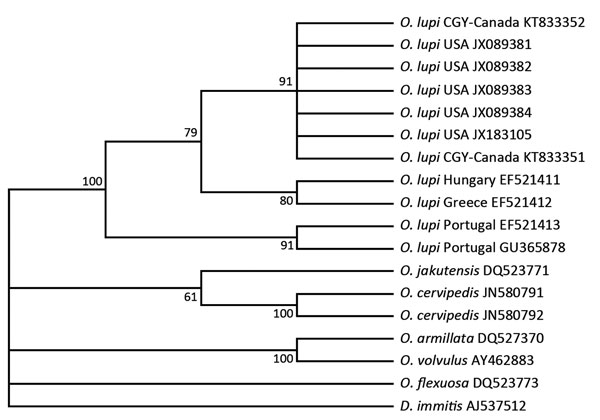 Figure 2. Phylogenetic relationship among the Onchocerca lupi nematode isolates from a dog in Calgary, Alberta, Canada (GeneBank accession nos. KT833351 and KT833352), and other filarial nematodes in the family Onchocercidae on the basis of the mitochondrial NADH dehydrogenase subunit 5 gene. The parsimonious tree depicts reciprocal monophyly of gene sequence derived from O. lupi nematodes from North America and Europe. Bootstrap consensus was inferred from 1,000 replicates. Values along branches are bootstrap values. Branches corresponding to <50% bootstrap replicates are collapsed. GenBank accession numbers are shown for all isolates. Analysis was performed by using MEGA 6 (http://www.megasoftware.net/). Canine heartworm (Dirofilaria immitis) was used as an outgroup.